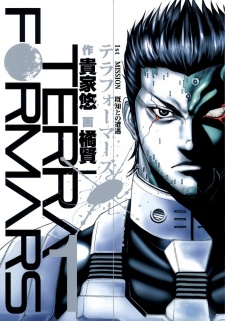 It will be revealed in the 38th issue of Weekly Young Jump magazine this year that an anime sequel of Terra Formars has been green-lit. The upcoming magazine issue will provide more information.

Previously, the series was adapted into an animated TV series and OVA. A live-action film is also scheduled to premiere in 2016. The series is based on the manga of the same name written by Yu Sasuga and illustrated by Kenichi Tachibana. The first season aired from September 27, 2014 to December 20, 2014 and ran for a total of 13 episodes.

gaddamn the hate on terra formars is real! no problem though, i really like it. haha peace!!!!!!!

*Raises hand* I did. Only really want more violence. Kinda interested to see where this season will stop.

Who asked for this?

Best news :D
Will wait for uncensored tho

I enjoyed the anime too


ExTamplier said:
DJAnime254 said:
Why is this a thing?? More black bars to cover 1/2 the screen?
And the worst part that there are still only 3 uncensored episodes.
Not sure what you mean since all the original Terra Formars episodes are uncensored now.

DJAnime254 said:
Why is this a thing?? More black bars to cover 1/2 the screen?
And the worst part that there are still only 3 uncensored episodes.

mayukachan said:
Animepsp said:
...e'm I the only one here who actually enjoy this anime ?
nah same

I enjoyed the anime too

Why is this a thing?? More black bars to cover 1/2 the screen?

Watched the first season, heared it was a horrible adaptacion. :/ Nah, most likely will read the manga.

You can already watch s1 without censor bar. They already released it while the serie was ongoing.
At least it's not another copypasta shounen

Seriously? The first season was already such a bad adaptation of the manga. I really don't think they'll do any better.

How did this get a sequel. lmao
Even without the crappy censorship this show is still crap

Let me just say I love Terra Formars, and I have been waiting anxiously for a second season. I really enjoyed both the concept and the story. This news very much pleases me. Now I just need a domestic BD release of season 1 here in the USA.

Animepsp said:
...e'm I the only one here who actually enjoy this anime ?
nah same

that was really unexpected to me
well,first season was kinda good so i will probably watch this

rederoin said:
And that is not how the industry works... so ye..

Good thing I'm not part of the industry so I can call season 1 garbage :D