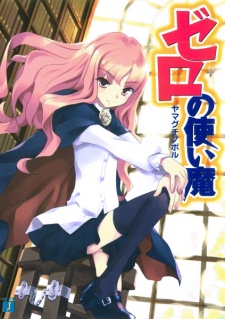 Popular light novel series Zero no Tsukaima by now-deceased Noboru Yamaguchi has been announced to resume until completion. Publisher Media Factory will continue the light novel's publication in its MF Bunko J imprint.

Noboru Yamaguchi died in 2013 at the age of 41, after more than two years of fighting cancer. The remaining plot and ending of the series were assigned to the series' editors by Yamaguchi on his sickbed.

Noboru Yamaguchi began writing Zero no Tsukaima in 2004 with illustrations by Eiji Usatsuka. It was discontinued in 2011 with 20 volumes out of 22 planned volumes due to the surgery and treatment for his illness.

A manga adaptation of the light novel by Nana Mochizuki began serialization in seinen magazine Comic Alive in June 2006, and it ended on October 2009 with seven volumes.

The light novel was licensed by Seven Seas Entertainment for English release in 2007 but was later cancelled.

Will they just continue the LN or also include an anime adaptation?

malvarez1 said:
As long as the author left notes regarding the ending, I suppose it's OK.

I Heard that when the series went on Hiatus in 2011 volume 20 was in a rough draft form and was in the Editors hands, Volume was near Compete in Rough Draft form and 22 was a Large Stock Pile of Notes. they did publish the 20th novel in 2012 using what they had, and he told them what was left of 21 and his plans for the ending and 22 was during his time he was being treated up to his death in 2013. So there is a Good Chance things should be fine, no matter who writes it but a good writer will still be good the Have.

AO968 said:
HaXXspetten said:
Heard about it yesterday, was very surprised but I'm curious as to how it turns out. Not sure it's really *needed* though but why the hell not
Loli-Sazanami said:
The 4th season of Zero no Tsukaima is the true ending of the franchise, making a sequel is completely unnecessary.
You know that was an anime original ending they made in order to make up for the fact that the author died before the series was over right? :s

The author passed away half a year after the series was over. And IIRC, he wrote the script for the anime, just in case he would die before it was done airing, so if thatls true, then the ending is as canon as you can get, as far as the anime is concerned. Maybe the LN will deviate from that, we'll have to wait and see.

Either way, I like the idea of the series finally coming to a full closure. Everyone wants it, including the fans, so I see no reason to not do it. Plus, it's a nice tribute to Yamaguchi.

The ending is anime-original overseen by the actual writer, but the story told is very different to, and much, much shorter than, the LN version. They made a branching off fourth season to wrap up the anime before the author died. Both the LN and anime are canon, but they're incompatible to each other.

SNaG21 said:
StormNA said:
I don't know how you can say the 4th season wasn't an ending, that's about as conclusive as you can get. I imagine the LNs will end much the same way.


We don't don't need to know what happens when they go to earth as it's probably nothing anyway. They get married, he introduces her to parents, happily ever after.

Probably because the vast majority of season 3 and 4 was pandering harem fanservice garbage. Granted, the LN is not innocent, but it at least tried to give a decent fantasy plot.

OMG IM HYPED NOW!!! Im in love with ZnT since the begining of my anime watching career D: ZnT no.1 and ain't nobodies opinion changing it. And i see Chloe-tsun is still in love with ZnT, she never changed since i met her ;) HYPE HYPE HYPE!

It won't be the same but even so is good news for the fans.

Im excited I knew it right away after it got announced so before it was here on MAL.

Strange to see so much hate here tbh ^^' oh well.

ZnT is very enjoyable I think the light novel is great (and the first and final season of the anime, rest was a bit off and they changed louise quite a lot)

The author left notes his family wants it plus fans so all green lights, dont see anything bad in it.
Hope it leads to more franchise as well

Props to the company, the dream of many fans of titles unfinished like this one.

As long as the author left notes regarding the ending, I suppose it's OK.

Wtf!! The author is gone!

And I still haven't watched the Anime.
Maybe I should watch it already.

HELLSATAN said:
Dark-Matter96 said:
If only someone would do this to kaze no stigma.

ZnTsukaima was the only harem I have seen so far, and I regret watching it. so I don't really care if it continues.

Whoa, wasn't expecting this xD I'm glad, though :3 I wonder how it'll turn out now ^^

Wow, I'm actually curious to see how it will turn out.

It's great that his work won't be left unfinished. It wasn't the best or anything, but I found it to be enjoyable enough. I'm sure he enjoyed what he did and it would be a shame to see it left incomplete.

It would be great if Kaze no Stigma would be completed some day as well, but if I recall correctly there wasn't enough material prepared to actually be able to finish the story. Sure, someone could just go from there with their own original story with their own ending, but for some reason I feel that would be disrespectful toward Yamato Takahiro. I mean, sure, we would have a complete story, but it probably wouldn't be what Yamato Takahiro had envisioned. The world he was creating would be, in a sense, corrupted I guess? I don't really know how to explain it, but hopefully that makes sense. (^_^;)

Still, I can't imagine how it must feel to have put so much time and effort into something only to be faced with the fact that it will probably be left incomplete and there's nothing you can do about it. (; _ ;)

Although I never read the LN, I still wanted it continued... A work dying with his author for me is not how it should end.

TALK TO ME, TELL ME YOUR NAME
YOU BLOW ME OFF LIKE IT'S ALL THE SAME
YOU LIT A FUSE, AND NOW I'M TICKING AWAY
LIKE A BOMB... YEAH BABY

TALK TO ME, TELL ME YOUR SIGN
YOU'RE SWITCHIN' SIDES LIKE A GEMINI
YOU'RE PLAYING GAMES
AND NOW YOU'RE HITTIN' MY HEART
LIKE A DRUM... YEAH BABY

SHE BANGS, SHE BANGS
OH BABY WHEN SHE MOVES, SHE MOVES
I GO CRAZY 'CAUSE SHE
LOOKS LIKE A FLOWER
BUT SHE STINGS LIKE A BEE
LIKE EVERY GIRL IN HISTORY

Let's just hope they release another season, would like to see what happens when he goes back to the earth after he literally just walked in and stole a jet fighter, no fucks given i guess :/