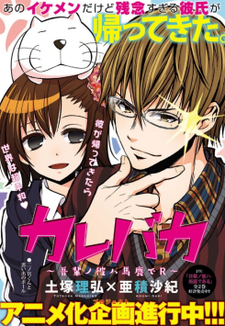 As part of the second anniversary celebration for web magazine Young Animal Densi, it was revealed in the first chapter of Kare Baka: Wagahai no Kare wa Baka de R that the seinen manga will receive an anime adaptation.

The story revolves around the daily lives of Akomi and her idiot boyfriend (kare baka), Ponta Ninoyima, whose only redeeming quality is his good looks.

Kare Baka: Wagahai no Kare wa Baka de R is a reboot of the two-volume manga Wagahai no Kare wa Baka de Aru. Written by Masahiro Totsuka and illustrated by Saki Azumi, it began serialization in Young Animal Island magazine in December 2012. With the launch of Young Animal Densi, it moved to the web magazine in April 2013, where it ran irregularly until its completion in June 2014.

YASSSS Seinen!
I hope there's no harem or harem elements ;____;

I like the idea. The manga started publishing on May 1st, 2015 according to MAL. Hmmm, looks like it'll be very short depending on when the adaptation comes out.
I hope the manga gets translated. I'm getting the feeling that it will be funnier as a manga than as an anime.

Interested, but can someone please explain why this is tagged as a Seinen? Are we expecting some crude humor in the show?

Sounds interesting, but not necessarily 12 20 minute episodes interesting. I vote OVA/ONA, or 3/5/10 minute shorts. Still on the fence until they release more information.

I'm expecting the guy will be funny like Free's Rei.

Picked up for baka hijinks and megane.

I'll watch it for the bishounen factor

Oh, I read the first chapter of this a long time ago and quite liked it. I'm going to watch it.

Pls no harem for this one. Plsss

I'm in! I bet this is Hilarious.

Should be interesting, PTW. I'm a sucker for romcoms at school.

ichii_1 said:
Big dick >Good looks >> education
Such is the way of the fujoshi.

I will watch it!

I see a cute megane boy and I'm like "hell yes".

Most probably a short but hey, why not? Sounds fun.

I am in. definitely in.

This sounds fun! Will try...