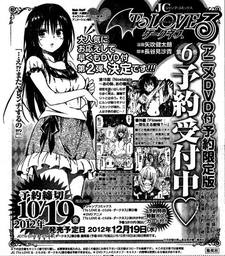 According to Jump Square magazine, another OVA of To LOVE-Ru Darkness was announced to be released on December 19th. It will be bundled with the sixth volume of the comic book. Chapter 19 "Nostalgia" and two extra chapters "Flower" and "The changing heart" will be animated.

The first volume of the OVA will be released on August 17th and the TV series will start this October.

Gash_V-D_Hetchum said:
This is the main reason I'll be watching:

but that means its gonna be censored on TV errrrr at least ill be able to buy the BD when they release them. which wont be for a while probably..

Hell to the yes. TLRD definitely deserves it.

For a second there, I thought the OVA will be delayed.

This is great news. More TLR Darkness is welcome.

i should probably watch the first season again some time. >.>

Nice! Almost caught up with the series and LOVE IT. Just in time for the new season and OVAs!

That's how you do it, you put side stories and an inappropriate content in an OVA. Not stupid fillers.

I will be looking forward to this.