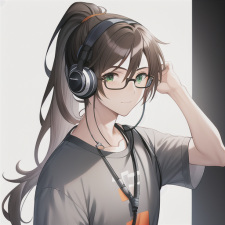 My Ravelry (knit/crochet):
www.ravelry.com
My Pixiv faves (NSFW! for pervs only):
www.pixiv.net

Inugirlz May 29, 2:45 PM
Hehe I already have Miya on preorder. Would’ve been great if he came with his hair up look but I’m satisfied with what we got. I’m surprised Hori hasn’t been announced yet (but I’m sure she will be).

Now the other MIYA I want is from sk8. I honestly want every single sk8 boy (except for maybe shadow and tadashi) thankfully many nendo fans agree as we all have been asking for them!

Inugirlz May 29, 9:05 AM
LOL SEE! I hope they make Draken too. He's not on preorder yet. It skipped the announcement and prototype step and revealed it in colour. It's currently pending for the license. It shouldn't be long before it's on preorder tho. I'll let you know when it is!

Honestly at this point I've come to terms with myself. Initially I said I'd stop at 100 but I'm hitting 80 with no intention of ever stopping if a character I love gets released. Now the question is where am I gonna put them all.

Inugirlz May 20, 8:09 PM
So I've been in the phase. You already know. But um this got released. And I'm so hyped I sent actual voice msged (as oppose to normal texts) to my bf. This is before Leon the champion. Before Sonia. Before Hop or the protagonist. I'm so hyped. He's amazing. He has the selfie pose!!!! My first pokemon nendo!!!!

Inugirlz Apr 20, 10:42 PM
I was so happy to see this until I read it. Why won’t any studio pick it up? It was such a good anime! Surely Japanese people appreciated it?!

Inugirlz Mar 28, 11:45 PM
Oh no I actually found Beastars quite good this season! It was enjoyable. It's just the ending I wasn't crazy about. Once you watch it we can talk about it I guess.

Oh for you BNA is the top of the crop for furries eh xD?

Oscar thing makes lots of sense. I always say though, everything doesn't seem quite as good in hindsight. If you ever try to summarize a story to someone it always sounds dumb or lacklustre. There are very few series I can honestly look back on and still believe it was a masterpiece (e.g. FMA Brother--deserves the recognition it gets for sure, LOGHs, HxH--basically the favourites in my list. With the exception of Inuyasha. I know it's not AMAZING BALLS but it has a special place in my kokoro)

I think everyone was let down with the whole fighting humans arc. But it made sense and really was plot relevant. The creepiness of the titans is the best part! Some look creepy and some look downright silly! Even in the current arc we still get to see some silly looking running titans. The comedic value is gold really.

No one bloody asked for 3 seasons of Starmyu! Why did that even happen!
Well you watch Boruto and Black Clover don't you? That's why you can stick with MHA (which is arguably better simply because Bakugo exists)

You must be going through a phase of some sort. I for one am damn tried of the shitty seasonals. I'm still gonna watch them (lol) and get stuck into 12 episodes of crap despite wanted to quit at ep 3 (lol) but I crave the really good series again. Rewatched Banana Fish with my BL and I was left so empty and craving something of that quality gain. Miru Tights...good lord. Ok fine i don't know what that is, lemme look it up before judging. 4 minutes per episode? Why did they make this just ecchi? Should've been a hentai. I do see the appeal of tights tho. I for one love wearing them. Even tho I don't particularly like her, the manager from Haikyuu is a character with tights that explained her reasoning for wearing them that I so understood. Do you remember that? Cuz she used to be athletic and her legs got all bruised and scarred so now she wears tights which hide them? Tights are saviours!

Beastars final episode was...well I won't spoil but something happened that I don't get or agree with at all. As for LHS3 I'm about 4 episodes behind at this point and I don't know if im going back cuz it wasn't capturing my interest.

EDIT: Actually i just checked the Snk MAL rating out of curiosity and when I saw it was 9.15 I was like....wtf that's high has fuck. What is it's overall rating then in the top anime list. And yup, a rating like that puts it at second place behind FMA Brotherhood. Like damn yo. Well of course this is partially because of how well-watched it is. But like damn. Season isn't even complete, people need to stop rating incomplete works!

I guess people don't wanna ship them and see steamy stuff (yet!). Odd.

Btw i started SnK. That shit is wild. Since we're both basically gonna binge watch it, do u even care to have episodic responses or just combine everything as you see fit? I'll probably do that since I'm already at ep 7 and have no intention of talking about every single episode. Just the general jist and key points.

Inugirlz Mar 4, 6:01 AM
Congrats! I should get back to my games as well but I’ve been occupied by fanfics and my book club book. Though u did write some episode responses :)

What game are you playing?