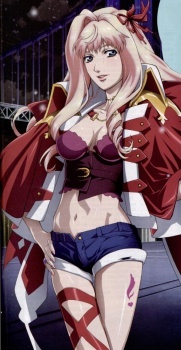 As a side-note, do you happen to be the same Westlo from AnimeBoards.com?

PeacingOut Jan 30, 2015 10:00 AM
Your commentary on the Owari no Seraph soundtrack was actually a really interesting read so full credit there for giving me that information to share with other curious parties. I just feel there must have been a different approach taken with Unicorn where he was asked to score to the scenes themselves which makes sense since they have more time since it was an OVA, but what I can't make as much sense of is where the variety and quality in his tracks seems to have gone. The mixing on a lot of his other OSTs just isn't very good and I'm not convinced the distortion aspect to his vocal tracks is intentional. Also I just don't think Mika Kobayashi wailing away in the background all the time is a very pleasant sound that pumps me up in action sequences like I think is intended. Obviously it works extremely well for a lot of people judging by the attention and praise he gets up and down the board ever since he got to score for a string of high profile titles, but the only one that holds up significantly well is Unicorn. Attack on Titan is okay, Guilty Crown and Aldnoah/Zero are kind of non-descript while I'd go so far as to say his score for Kill la Kill actually weakened a good chunk of scenes for me. Sometimes it just gets old hearing the same cycle of vocal tracks and leitmotifs played over scenes over and over again to the point where it becomes predictable and rote. Also many of his other soundtracks kind of lack that variety in tone and just kind of seem to be comprised of 95% pump up vocal track music or at least that's how it feels. Honestly I can't think of any other composer that leans that heavily on the vocal track side of things so it might not be quite as much as it feels so much as how it's used. For example I'd swear Aldnoah/Zero's director is obsessed with that one ending song they keep playing any time something vaguely cool happens on screen, but you don't hear Unicorn blaring for every climactic scene in the OVA.

I was actually never that huge on Brain Powerd's OST other than a couple of tracks like Ark and Ground Zero though.

Gundam Build Fighters soundtrack gets a little credit but not enough IMO. I just don't think most people pay attention to or take much notice of soundtracks unless it's Kajiura, Sawano, Kanno etc. The big well known names among otaku. That sort of has me thinking maybe he gets used so much on account of brand name recognition as much as anything, which in a way would make sense. Plus he gets monopolized a lot by Aniplex for their projects lately I've noticed (Owari aside) and brand name recognition as a lead for an audience seems like a very important part of their business plan.

Anyway yeah I've noticed Build Fighters Try's OST is a little weaker than the originals. Most of my favorite tracks seem to be front loaded on the OST and I'm gonna go ahead and assume those are Hayashi's. Sawano seems like the most prolific of the Legendoors composers (who seem like a sort of JAM Project for action anime music compositions) which doesn't come as much of a surprise considering how much he's getting worked and how many re-releases his soundtracks are getting. He's really just kind of able to coast at this point by the looks of it which never bodes well for people that legitimately care about the quality and growth of music artists in this industry and not just the hype of it all.

Also yeah Guilty Crown seems to have marked the first major stylistic shift in Sawano towards those vocal music and grindy sound tracks and away from the big orchestral ones that pack in the emotional content as I like to call it. I'd say Kill La Kill was where I really started to get alarmed though as it's just such a small soundtrack and I swear like at least half of it must be vocal tracks. Again a lot of people really love that sound or at least claim to but I just think it takes away from scenes more than anything the way in which he does it with the blaring loudness and IMO generic nature of it all.

PeacingOut Sep 27, 2014 8:49 AM
No nobody really cares enough about their productions enough anymore anyway and related or not the pre-emptive bashing trend of their shows seems to have settled down a lot as well....possibly just to them not really being all that well known anymore outside of Japan. Besides we're firmly in the era of Sony Music Entertainment practically owning the industry and the fans hearts and minds with their buy up every popular adaptation right and hype up their originals with popular names strategy. It's kind of going to be hard to have arguments over studios in about a decade I think anyway when they just literally own the entire industry instead of largely owning it. Starting to wonder if I should quit while I'm ahead or bother to stay around to see what that era looks like, but I feel it coming and not sure if want.

I don't know yet because I've still only seen the first episode waiting on confirmation that the OVA project is even going to get finished which was recently announced. So far it seems to be a largely enjoy it for the action and politics piece though. The new cast could use some work and it definitely doesn't have the surprise twist nature of the TV series since it lacks the main character that pulled those gambits off in the first place.

From what I understand the current Jojo season is only halfway through Stardust Crusaders. It's split cour with the gang just arriving in Egypt finally where it left off and I think it's coming back in Winter to finish things up.

PeacingOut Aug 11, 2013 2:20 PM
Well the way I see it I was banned for a stupid reason anyway and didn't necessarily do anything in that discussion other than share my thoughts on where I thought people were being unreasonably critical (the animation quality, not the script which has issues for sure), but there's kind of nothing I can do about it as long as RF is there and has a hard on against me. I'm all but 100% certain if I just registered again if he ever stepped down as an authority figure that I could use any variation of Kaioshin Sama and I'd still have absolutely zero issues ever again and probably not see so much as a warning, but I'll cross that bridge if/when I come to it.

Until then it's kind of just him sucking the life out of that board with how tightly he's wound up about safeguarding those that can help themselves that I can't say I'm in a huge rush to be a part of that again. He's not a bad guy per se, but I think he just really sucks at knowing when to just let a conversation play out and when to play kindergarten teacher like he's often prone too.