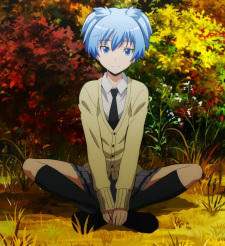 K-J-Whitten Apr 11, 8:55 AM
Cool. I'm also trying to catch up on stuff that aired already too. I thought season 2 was great. Has the same slice of life type of content and epic fights. I thought the darker tone shift was well done and made sense with what was built up previously. The tease towards what the next part of season 2 entails is promising, I can't wait to see what happens next!

AutumnWaterbird Apr 9, 11:05 PM
Diary of Our Days at the Breakwater is already on my list, but thanks anyway! :D I like slice of life when it has a central gimmick, like fishing. That's why I decided to watch Yakunara Mug Cup mo this season. It's about pottery and looks like a straight-up advertisement for the town it's set in. It's really sweet so far and since they don't drag every episode out to 25 minutes, but leave it at 15 minutes, the first episode was quite digestible. It also sounds rrally nice, that surprised me especially :)

AutumnWaterbird Apr 8, 11:40 PM
I doubt K-On! gave rise to the CGDCT genre; Lucky Star existed, after all. K-On! is so much more than just CGDCT, though :)

Kanon and Clannad are naturally comparable because they stem from the same visual novel creator and were also both adapted by Kyoani (same as Air). I'm definitely going to watch Air and Kanon, those two are not escaping me :P

AutumnWaterbird Apr 8, 6:40 AM
Actually, there are three Kyoani shows that made my top 10 :) My runner-up is Clannad, which is best described as not a slice of life, but a loaf of life. And third place is K-On!, which is 40 episodes of tea and splendour. And a bit of music.

Hyouka is something special to me. I think I watched it at a critical time not long after I finished school and basically saw my entire world reflected in it. I saw myself in every character, I saw my friends, my school, and my mid-sized hometown, a place stuck between tradition and progress. It taught me to treasure my home. And I agree with you, Mayaka deserves more love :)

AutumnWaterbird Apr 7, 1:25 PM
Kyoani is my favourite studio, so I definitely plan to watch pretty much their entire catalogue. I've even seen Munto (I mean, who the heck has seen that?) ... and I have the exact same reservations about Free! as you haha...

Horimiya was... kind of disappointing to be honest. It's a fairly long manga, and 13 episodes just isn't enough to cover all of that. A lot of characterization must have been lost. At the end, I feel like I barely even knew any of these characters. And that's kind of a shame. That being said, it definitely has its moments, so I totally think it's worth a watch. And this is also just my opinion -- plenty of people were absolutely happy with the anime :)

It has got nothing on Kaguya-sama, though, and the shows are very different, too. Kaguya-sama succeeds because it always finds new and funny ways to spin its premise and before you know or expect it... boom. Development. It feels earned and not spoonfed :P

Enough complaining... Wonder Egg Priority. It deals with some heavy stuff and can get pretty dark, but these parts are not omnipresent. It's not Madoka Magica in that regard. It's an absolutely beautiful show regardless, and apart from all the suffering it's also filled with rewarding positivity. It's also not finished yet -- the series will conclude with a special episode due in June. It was postponed because of production issues.

I've watched Rent-a-Girlfriend, it's a nice show to have seen. If it was anything, it was funny :P
Recently I've also started Tonikawa, it's a show I sort of missed when it was airing and it seems to be really cute!
Never heard of these two science fiction shows, but thanks for putting them on my radar! I might put them on my list.
And Kaguya-sama is obviously great. It's already one of my favourite shows, and I'm really excited for the OVA and Season 3.

I finished Amagi Brilliant Park yesterday, which is an anime about 50 Cent and Queen Latifah saving a themepark with the help of Kanye West. Not to mention that it's both a really funny and a ridiculously good-looking show on top. And the characters are... well, it's Kyoani, so they're great.

I'm also halfway through Little Witch Academia, and it's such a delight to watch :D It's also my first Trigger show, so I have high hopes for the second half.

Non Non Biyori is better than Yuru Camp (there, I said it), and...

My highest priority right now it's Fruits Basket, though. I can't wait to see this long-overdue anime adaptation for a classic manga come to its well-deserved finish.

As for seasonal shows, in Winter I've watched five of them: Beastars Season 2, Quintessential Quintuplets Season 2, Horimiya, Urasekai Picnic, and Wonder Egg Priority. If you want me to talk about any of them, please ask! :)

AutumnWaterbird Apr 6, 7:59 AM
Hello! :) I just realized we never quite got to talk to each other.
So what have you been watching recently?

Marinate1016 Feb 7, 10:48 AM
Appreciate that. I agree 100 percent that most of the people on here seem to hate everything they watch. They overanalyse everything. If something is really entertaining, fun and I wouldn’t change anything, it’s a 10. It don’t have to be a masterpiece or the best thing ever. I feel bad for people who have average scores of like 4/5. If I ever got to a point where anime was that bad on average, I’d stop watching.

Another thing, a lot of people watch shit they know they don’t like. Like people complaining about redo. I only watch things I know I’ll like.

Marinate1016 Jan 20, 10:24 PM
Sorry for the late response, hope you had a great christmas and new year! I loved MagiReco, personally more than OG Madoka.

And yes it's a wonderful series. I love stories like that..

Strawberryy Sep 4, 2020 12:24 AM
Ah dude I haven't finished the series!! I'm only half way and I never got around to finishing it. (I don't have the means to watch anime at the moment so I can't finish it) but I just fell in love with it after episode 1 ended. I saw the cover for the movie and I will definitely watch that too right after I'm done.
I loved the soundtrack for the series <3