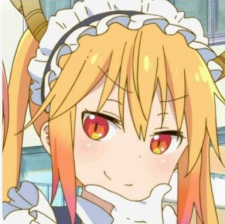 RedVelvet930 Oct 20, 7:47 AM
It’s really awesome to see someone like you with enough ambition to write a book like that! I’m honestly not much of a reader but ironically I have dabbled in writing myself. I didn’t write anything as grand as a novel but I managed to finish a handful of poems and a short story or two. I used to write more when I was in college actually! XD Now between working full time, hanging with friends, and watching anime I can’t seem to find the time - for real, I don’t think I’ve written anything in over three years! I’d love to get back into it someday when I have more free time. Anyways, best of luck to you and your book; are you wanting to publish it?

RedVelvet930 Oct 15, 2:28 PM
I’ve heard of Tsukimichi but I haven’t seen it. I searched the internet and it didn’t look like it was dubbed as of now so I might wait until that happens. Honestly, I’m really trying to lean back on how many isekai I watch just because many of them are pretty similar. At the moment, I’m just sticking with isekai that break the typical isekai mold, for instance: from 2021’s seasons I’m planning on watching only The Saints’ Magic Power is Omnipotent (because it’s a shojo isekai which seems really unique), Dungeon of Black Company (instead of fighting, the lead becomes a mine worker), Banished From the Heroes Party (the lead decides to live a peaceful life in the countryside - a SOL isekai I guess), and How a Realist Hero Rebuilt the Kingdom (which is my clichéd isekai for the year). With that said, since isekai’s are usually quite good I typically get a craving for one every couple months so I’ll probably end up watching a lot more than I’m planning! I feel like it doesn’t matter whether it’s on my list or not, if I haven’t seen it I’ll give it a try! :)

So, you’ve mentioned this book you’ve been writing, how’d that come about? What inspired you to write? Is it a manga or like a novel?

RedVelvet930 Oct 13, 8:51 PM
Well, obviously That Time I Got Reincarnated as a Slime is my favorite isekai atm but a very close runner-up is Ascendance of a Bookworm. I watched it earlier in the year and found it to be a very unique take on the isekai genre; instead of focusing on magic and monsters, it focuses more on social status’, economics, and the daily lives of the main characters. Plus, this “other world” isn’t all that different from Earth besides the fact that people have rainbow colored hair, have mildly different customs and actions, and a few people have mana which is like magic but not as clichéd as in most isekai series’. It’s also really wholesome, just a really cute slice-of-life show with a fantasy twist.

Shield Hero is really good too but I found the cast to be a bit bland plus that red-haired lady was so frustrating! I felt so bad for Naofumi because everyone hated him for no reason. I’m really looking forward to season 2 though, I think it’s gonna be pretty good! :)

Another isekai I love is The Master of Ragnarok and Blesser of Einherjar. Yes, I know it gets loads of hate and has an abominable score on MAL, but that’s exactly why I was surprised by how good it was! If you like harem anime, you should give it a try - cute girls, fun action, good comedy, and a kick-butt male lead make this one a standout imo.

Grimgar of Fantasy and Ash is another favorite of mine, definitely grittier though. Also, because of certain things that happen it’s not exactly… pleasant, but I think that’s why I like it - it takes isekai in a darker more realistic route. It was also the first isekai I ever watched.

The last one I’ll mention is Didn’t I Say to Make My Abilities Average in the Next Life? What I loved about this series is the girl who’s “isekaied” is a big otaku, so throughout the entire series she knows she’s in another world and embraces her op power and the isekai clichés that come her way. She also makes references to famous anime several times which is funny! Oh, and don’t listen to the people complaining about the pedo stuff, it lasts for only three episodes and the creepy woman doesn’t even do much other than make a few lewd comments about/to the lead girl.

RedVelvet930 Oct 13, 2:53 PM
Thanks for your input on Jobless Reincarnation, that really helped me get a decent idea what it’s like. I don’t usually watch shows that are more mature, but it depends on the content; as long as it’s doesn’t have explicit sexual stuff or excessive gore then I’ll probably give it a go. Also, the protagonist having a reason for being pervy is always more interesting over just being a jerk to be different.

It’s funny you mentioned Kazuma from Konosuba because… he was alright. I had heard he was a likable character but, to me, his perverseness and negative attitude made him unlikable. I guess I prefer the stereotypical “nice guy” character over someone who always complains and just admits to doing pervy and/or gross things. The show itself was also a bit underwhelming, while I turned out liking it by the end, I was surprised by how lewd and stupid it was; it took awhile before it grew on me. Most people rave about the cast and humor both of which I found lackluster; Megumin was funny but I thought Darkness was over used to the point of being annoying, and while some scenes were hilarious (the choker episode was funny), other skits were just plain stupid and unfunny. I’ve heard it’s a unique type of humor.

All that aside, I’m not trying to hate on Konosuba because like I said I liked it by the end and I am looking forward to the next “project” - hopefully a 3rd season. :) I just feel like it doesn’t deserve all the hype it gets because the show is more of an acquired taste, some people may love it, others may hate it.

Since we’re discussing isekai’s, what are some of your favorites? Are you tired of them yet? Personally, I am a little bit but not enough to stop watching them! XD

RedVelvet930 Oct 9, 11:48 PM
Well, Date A Live is a tricky one because it’s changed studios several times. The studio that made the first two seasons went under so J.C. Staff did season 3. I’m assuming the backlash about “terrible animation” made them switch again for season 4. I’m excited because it’s really the first bigger franchise project GEEKTOYS has gotten to do so I hope their up to the task! :)

So what were opinions on Jobless Reincarnation? It’s got a high score but I’ve heard it can be kind of… gross, like in a pervy way, which make it hard to watch. Would you agree? Or, like a lot of things nowadays, was it just blown way out of proportion?

RedVelvet930 Oct 9, 3:13 PM
That slime one is already on my to-watch list but thanks for the positive opinion; I’ve seen so many isekai that I’m trying to limit how many I watch barring one has something very unique. I was almost going to pass on Killing Slimes for 300 Years but after your input I’ll definitely give it a shot at some point. :)

Let’s see… recently I’ve been trying to clear out my 2020 watchlist while randomly inserting some random show every now and then. I guess the last “new” one I saw was Suppose a Kid from the Last Dungeon Boonies Moved to a Starter Town which was pretty fun, had some great humor and surprisingly good action. Then I saw Bamboo Blade which is a bit older (meaning pre-2010 XD) and that was cute. It was about a kendo club but did a fantastic job of blending sport, comedy, and drama together. Last night I finished watching RErideD: Derrida who leaps through time which was pretty fun. Despite its terrible MAL score (5.67), I thought it was a decent sci-fi but honestly it’s one of my least favorite genres; I mostly watched it because it was by GEEKTOYS which is a studio I like. If you’ve seen Hensuki or Plunderer they are also by the same studio. They also have the pleasure of animating season 4 of Date A Live so that’s exciting! :)

I’m really hyped for Slime season 2 but I’m probably gonna wait for the dub to be finished which will likely be another month or two. I heard s2 gets a bit darker. What did you think of it?

Out of all these 3 i recommend you watch Vivy's flourite song. It currently has 2 episodes, it has top tier animation and it has a pretty good story aswell. Its probably the only anime that i find interesting this spring season. Try giving it a try, you might like it :)

Ah i see, oh ok thats cool. if u want i can give you a few anime recommends for this spring season if u ever change your mind.

Also i saw you have alot of favourite animes so i was curios to know which one is on top, like which one out of these is ur no 1 favourite.

ScarredHerobro Apr 7, 12:46 AM
Ohh thats pretty cool, each episode being unique really makes me curious, unfortunately i dont think i have the time to watch a 1000 episodes of anime at the moment, but if i ever get free for a huge amount of time ill surely give it a try :)

Yeah thats true, I loved one piece so much i binged watched it in a good 15- 20 days ( barely getting any sleep at all ).

Ah i see, so you're not plannin to watch any of the airing animes this spring season?
All Comments