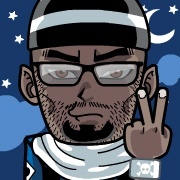 How about Adonis, Julius' son who died needlessly with him?

artist-retired Sep 24, 2014 1:24 PM
Alright, I'll do a quick intro there tonight or tomorrow. And whatever you call dibs on first, i'll take leftovers, though I do want to write about seven sins and maybe terra fomars if it ends up being as dumb as I fear it might be.

artist-retired Sep 24, 2014 12:40 PM
I got the invite to your blog. As for the shows I plan to check out, they are the following:
Parasyte (Kiseijuu) The one I'm looking forward to the most.

Fate Stay Night Unlimited Blade Works, cause why not? I'll be better than the movie and pretty to look at as well.

Garo: Honoo noKokuin, fan of shaman king and I hope it's recent.

Gundam G no Reconguista, not the biggest fan of gundam to be honest, but I'm a fan of the character designer.

Nanatsu no Taizai (The Seven Deadly Sins), One of the hopefuls to hold me over til jojo is back and maybe a replacement for hunterxhunter?

Terra Formars, because gar, I want some gore but it's dumb as hell I'm dropping it.

World Trigger, like with Seven sins, hold over and hopeful.

Ai Tenchi Muyo, not because I'm a fan, but because I like the character designer.

And one of the moeblob shows to torture myself, to make sure I actually don't enjoy something.

Almost everything is based on how it looks, which is going to be iffy, I tend to strike out when it comes to that.

artist-retired Sep 23, 2014 9:39 PM
Thanks, I'm trying to max out the snarkiness with my blog, something did with my old reviews and right now I'm just taking my time to get my introductions done. I really want to do a huntrxhunter review, the one that just ended, but look at it in a retropective way. But, before I do that, I want to read the manga and watch the old series first to fully get the hunterxhunter experience. But yeah, how about i help you with the next fall season anime, there's actually a lot I want to check out.

Actually, hold that thought on me wanting to join up with you on blogging (The idea isn't off the table) I literally threw this together in a hour or two. Real bloggin stuff, I have no idea wordpress existed. But, give it a read if you want.

artist-retired Sep 22, 2014 9:27 PM
Sorry for very late reply, could you post a link to your site? And maybe, if you're interested. I could write up some reviews or other things for your site. I feel like I really want to come back to reviewing and some writing on the internet in general, but this site isn't the place for me go and do that again.