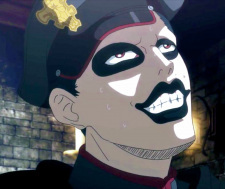 CrimsonCW Mar 28, 9:32 PM
Episode 1 wasn't ZERO relevance, it just was very poorly implemented. There's a full volume or more of content from the manga missing, the entire resolution of the Eclipse, the rest of the Black Swordsman chapters, etc. Add in the awful anime-only lines regarding "Griffith as king" from episode 1 and those are the absolute worst parts.

But if you cut out that single line, the episode is at least 75% the same as the manga; it's just not led into well at all. Pacing and structure is the issue, not the writing itself.

And you obviously don't delve into Berserk content, because anime almost exclusively draws people into manga, in almost every scenario. Hell, even those atrocious Golden Age films drew so many people into the manga too; to say nothing of how many were from the 97 anime. It's a lot, in any case. The problem is that every Berserk adaptation falters in some capacity, so we've never really gotten the massive surge a truly amazing adaptation could bring to it.

I actually read chapter 1 and watched episode 1 simultaneously after a friend told me about the series. And from that, I knew the manga was the better option, and so that's what I stuck with and only watched the anime much, much later.

You've got 41 volumes, with a semi-regular pace now; I think you could probably start now without risk of running out anytime soon. But be sure and find good translations; pretty important.

CrimsonCW Mar 27, 6:31 PM
That's what the manga for Berserk is for, I guess. The anime at least did a good job in herding people over.
All Comments