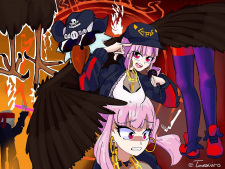 AngryAlchemist Nov 30, 2022 11:53 PM
I finished the first season. It's great. I don't know if I'm perhaps overstating things a tad but honestly it's pretty close to a 9 for me. Excited for the rest, will try to get to it this month. And yeah, the comedy is great.

AngryAlchemist Nov 28, 2022 2:25 PM
Hey Flug. I'm watching Kaguya-sama right now and it's pretty fucking great. What do you think about the new season? And also, do the characters start to have more emotional/dramatic scenes as they go on? I'm surprised how much more of a comedy it is than a romance so far.

Also, what was with the bruh?

That sounds pretty cool. I'll have to check it out sometime. The only vtuber I've watched is the really famous one ... who's name i forget. At least to my memory.

AngryAlchemist Nov 1, 2022 1:15 AM
Yes! I've been watching consistently since late July after not watching any for like two and a half years. It's been nice. I've completed about 40 things since then (all anime included). Also rewatched Evangelion cause as you could probably tell the shows I haven't seen in a long time I've put on a rewatch list. Just reaffirmed how it's pretty much the best thing of all time. Gearing up to watch the Rebuilds this week, never seen them and a little scared because of their divisiveness, but also optimistic.

How've you been bro? Sorry for not keeping in touch.

Suavacious Mar 23, 2022 1:37 PM
It's been almost a year since you commented and I just now realized that you wrote cup instead of cub lmao.
All Comments