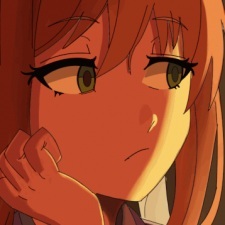 Terrestrious Aug 19, 2021 2:49 PM
There's a few great things about Odd Taxi. The first is the dialogue and the main character Odokawa himself. There's a real strong flow to the conversations and every character really has their own voice, and Odokawa's bluntness immediately made him one of my favourite protagonists I've seen in awhile. And in terms of the dialogue, there's one character in particularly I'd be remiss if I didn't mention. It's kind of a vague spoiler since they sort of play it off as surprise, but it's just like a character quirk, it's nothing plot relevant.


There's a character who speaks entirely in rap, and it's awesome. Guys got a really good flow (I think the Seiyuu might actually be a rapper but I'm not 100% on that), and the translated subs were pretty solid. I love that guy.

I also love how many interconnected moving pieces there are. Sort of like Durarara!! but a lot more cohesive, as the story is generally focused on Odokawa, but there are several other character stories going on, almost all of which tie back into the main plot. And the final episode even pays off that conceit in a way Durarara!! never does with an amazing climactic sequence. And it does basically tell a full story, which I always like. I see you didn't really care for Durarara!! so I hope that comparison deters you, I've also heard it compare to a Tarantino or Woody Allen movie.

The final thing I'll say is it also deals with more modern issues in a really good way. One of the characters is entirely motivated by going viral and basically becoming an influencer, and that plot line's really good. But more impressively from me, is episode 4 that does a deep dive into a character's life, and really tackles how problematic gacha games can be. It's one of my favourite episodes in all of anime, and can essentially be watched stand-alone, it is plot important & better to watch in context, as t's the start of what I found to be the most interesting plot thread. I think worst case scenario, that episode is at least worth watching.

I will say, I do think it's a bit overhyped/overrated, cause I watched it because of all the praise it was getting. Definitely still a great and unique show though.

Terrestrious May 9, 2021 10:36 AM
I had to look those two up because it's been so long I didn't really remember their look by memory, but I'd definitely agree that they're colour palette is among the more bland. Which is a shame, since Marilyn Manson in particular was one of my favourite fights iirc.

Oh yeah, Made in Heaven is just going to be nuts. Especially in the anime if David Pro Made in Heaven's the OP, I always look forward to that element of the adaption after since DIO stopped time during one. I also kinda hope they actually show Rohan make his deadlines during it lol, his shoutout there was one of my favourite parts of the Made in Heaven bout.

And definitely. I'll admit, being that Steel Ball Run is easily my favourite part of JoJo's, I've had points of just treating like the other parts as just one stop closer to Steel Ball Run in the past (not just Part 6, also happened with Part 5). But now that it's announced, and partially they took so long to do so, I'm just hyped to re-experience Stone Ocean (in large part because of Jolyne, who is my second favourite JoJo after Johnny) and hopefully end up liking it a lot more this time around because I think more often than not, David Pro has managed to be the better version of the story. Golden Wind's anime is definitely superior to the manga in my opinion, I think Diamond is Unbreakable is the only one I've preferred in the manga so far.

Terrestrious Apr 30, 2021 6:43 PM
I really hope Anasui keeps the Diavolo colour palette but besides that, nothing in particular jumps to mind. To be honest, part of me also hopes they keep Anasui a woman in his first appearance lol. Though considering they kept the heights consistent for Hazamada & Koyabashi, I'm certain they won't keep that.

It's probably the obvious answer, but I'm really looking forward to Bohemian Rhapsody. Not just because it's one of my favourite arcs but because I'm really interested in how much they're going to neuter the arc. Do they just gut all the small cameos like Spider-Man's hand, Mickey's tail, and Astro Boy & the lads? I think Kenshiro & Roah were just referenced by name and not shown at all so I imagine that's probably safe. If they do cut that stuff, will they at least replace it with something else recognizable?

Beyond that, the next thing that jumped to mind was Long Time No See, Romeo. One of Jolyne's best moments, definitely one of her most savage. Another one that really jumps out to me is Sky High. It's been so long since I've read it that a lot of the details and moments of the fights are super foggy, if not outright gone, so I remember that one as the one where she set herself on fire. I don't entirely remember why but I remember it was one most bad-ass things in all of JoJo's.

What about you? What are you most excited for?

Terrestrious Apr 20, 2021 3:02 AM
And Jolyne looks so good too! Really happy with the colour palette they chose for her.

Leviiiiiii Dec 27, 2020 10:59 PM
maybe because we have some what of The same Anime.Taste BTW Im new to my anime list and I hope you have a great holiday 2

YOLOMANTIC Jul 9, 2020 11:32 PM
bro it is just fucking lit, and when you finally realize what is happening before the anime has to explain it i feel like 200 iq, really give the show a try and the ost is getting better and better

etekusat Jun 3, 2020 1:56 PM
i am answering extremely late. i would say the comedy. there were so many parts that i repeated multiple times while watching because they were so good. you are not the only one who asked me. i just felt first was good overall.

also how are you doing? anything interesting in life?
All Comments