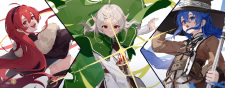 ravenclawesome Jan 25, 11:28 PM
hello there and thank you for accepting my friend request! ˆˆ
you favourites are very nice; i haven't watched all of them but i've heard good things about most so your taste seems to be good, i really hope we get along well!

have you been watching/reading anything interesting lately? you can recomend me stuff if you want!

MufatNuts Jan 30, 2021 10:09 AM
I understand the build-up, but it is extremely uninteresting. I'm waiting for the actual stuff to start before I decide whether I drop it or not.

The build up is WAY WAY WAY too slow, and the comedy is not entertaining enough (in my opinion), I understand fans of the novels that know how it is going to change in a couple episodes, but if an anime consists of 5+ episodes that are practically sleep-inducing at the start, I can't see it doing well overall.

And I understand the differences between the Slime Isekai and this one, I was just mentioning how the "great sage"-like character telling what skills you are getting, and the whole CONCEPT is similar, but Slime does it way faster and reaches the entertainment faster too. I am hopeful though, for the main part of the story, since the novels are pretty highly rated.
All Comments