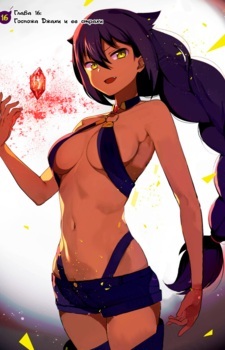 bakerbherrin May 20, 7:21 AM
Hey did you ever make that website for rating anime op's and ed's? My roomates and I have been searching for something like that

BitchGimmeATitty May 12, 9:42 AM
bitch gimme a titty

JASHINRYUU Apr 16, 10:07 PM
does it have opposite gender romance or same gender?

JASHINRYUU Apr 16, 8:28 AM
Bro are you into shoujo- ai nowadays. I see your taste changed XD

uninventive Feb 6, 6:40 AM
ur milking the shit out of this ishuzoku mess and i'm not even mad

Viltas Feb 6, 6:17 AM
I unironically love you for these threads this is best comedy

You can imagine the disgust and panic on peoples' faces who are fans of HxH, FMAB, S;G, etc. to see one of the raunchiest and ecchiest shows nearly overtake the top spot.

I've watched it till ep 14 and I'm loving it. I don't know why people call it generic. It's plenty different from other shonens. Lol

TheGreatPapi Oct 11, 2019 1:33 AM
I myself think the anime is very overrated by the fans, is visually appealling, trully something beautiful and i can see that had a lot of care on the choices of the design of characthers appearences (EXCEPT MICHAEL JACKSON, THAT FELT SO OUT OF PLACE), which in my pov causes people to overreact because of the aesthetics and it's animation. Also there is a wave of new anime fans who have kimetsu as one of their first animes they ever watched and the first ones usually seems like something magical and bordering on perfection, which is a huge overreact by these people.

Those reasons makes me think that the more old school type of otaku gets triggered with that because they feel like kimetsu is undeserving of the hype it has, since them being here in this niche for a longer time means that they already watched those type of battle shounen anime before, so demon slayer isn't in their eyes something fresh and cool but a repetition of past trends.

I personally kinda like the anime, specially the characthers interactions, you can take this with a grain of salt but what kills the vibe for me is that a lot of times the script seems rushed where things aren't fully explained or just plain dumb with characthers making stupid decisions or not even bothering to question things. Still, i kinda like the anime but is specially for the visuals and characthers, even the generic trash people say i never bothered with it, i think that if things become generic is because people like seeing that, but if is well done and don't seem unoroginal af then I see no problem at all.

TheGreatPapi Oct 11, 2019 12:09 AM
youre everywhere here defending the anime
All Comments