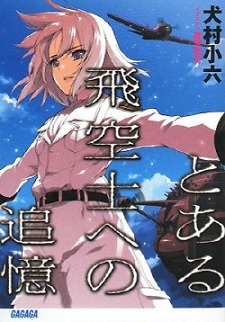 According to GaGaGa Bunko, Morisawa Haruyuki's light novel "Toaru Hikoshi e no Tsuioku" was announced to get a movie adaptation. It's unknown whether the movie is live-action or anime.

Cove art of the novel

Synopsis: Charles, a mercenary pilot of the Levarm Imperial Air Force, receives an secret order "Fly 12,000 kilometer across the sea in the middle of the hostile territory and send the Princess securely to the main land ". He fights against devastating number of fighters and overwhelming battle ships to protect Princess Phana. This is about a forbidden love between a pilot of orphan birth and a girl with unchangeable destiny.

Updated on April 1st
According to GAGAGA Bunko, it's confirmed to be an anime movie. The production studio is Madhouse Studios.

I get why everyone is complaining about the ending - I waned them to be together too! But, from looking at the film in a new perspective, I realized that they probably chose the best possible ending. Firstly, they would only have known each other for a few days. There's no way they could possibly feel true lasting love in that short time. I reckon Fana must have had a crush on him because he was trustworthy and different and the pressure of having to marry some random guy made her like him even more. But the MC must have known it was like this and felt that they wouldn't have lived absolutely happily of they eloped and also Fana had a duty to her country, like he had a duty as well.
Apart from this, the movie was wonderful in basically all aspects:
Lovely music, flowing and not too overpowering
Great vivid animation with realism and lush natural scenes. The aerial/fight scenes were some of the best I've seen in a long while.
The story line was bittersweet so if you like romance or adventure, the anime movie would be perfect.
The VA weren't bad. They were mediocre but it doesn't talks away from the feel of the movie simply because it suited their characters' personalities - slightly shut off, stoic and having gone through many different hardships in their separate lives.

Couldn't possibly have been more disappointed.

Director: Let's try to make this as shitty as possible!

The novel was such a good read . . . why couldn't they adapt the novel? Instead of animating bullshit.

Don't know if it can match the novel, but I'll give it a try.

The 'To Aru' part tricked me. Anyways, this looks alright

dtshyk said:
... seems like my shitty synopsis brought terrible prejudice, but it's one of the best light novels released in 2008. an orthodox story doesn't necessarily mean it's a crap.

MAL denizens are getting more and more elitist.

Anyway, if it ends up being an anime movie, sure I'll watch it. Why not.

... seems like my shitty synopsis brought terrible prejudice, but it's one of the best light novels released in 2008. an orthodox story doesn't necessarily mean it's a crap.

plot seems typical to me, might try it if it's an anime

Stop already with the overused ideas!

Wow, sounds exactly what my fanfic is about. Definitely gonna watch this one.