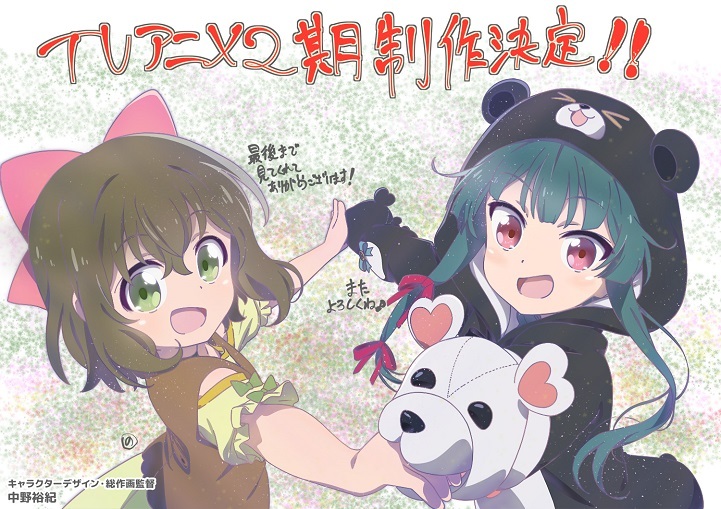 The 12th and final episode of Kuma Kuma Kuma Bear (The Bears Bear a Bare Kuma) announced a second season at the end of its broadcast on Thursday. The official website also revealed a commemorative illustration, drawn by character designer Yuki Nakano (Boku no Tonari ni Ankoku Hakaishin ga Imasu.). 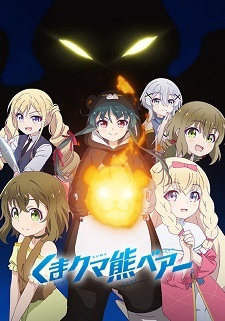 Synopsis
Fifteen-year-old Yuna prefers staying home and obsessively playing her favorite VRMMO to doing anything else, including going to school. When a strange new update gives her a one-of-a-kind bear outfit that comes with overpowered abilities, Yuna is torn: the outfit is unbearably cute, but too embarrassing to wear in-game. But then she suddenly finds herself transported into the world of the game, facing down monsters and magic for real, and the bear suit becomes the best weapon she has! (Source: Seven Seas Entertainment)

The anime series produced by EMT Squared premiered on October 7. Funimation simulcast the anime with subtitles as it aired Japan.

Kuma Kuma Kuma Bear adapts Kumano's comedy fantasy light novel, which they originally launched on the Shousetsuka ni Narou website in October 2014. Shufu to Seikatsusha began publishing the novel with illustrations by 029 (Hataraku Maou-sama!, Inou-Battle wa Nichijou-kei no Naka de) through its PASH! Books imprint in May 2015. The 16th volume went on sale on September 25. The light novel has a cumulative 1 million copies of its volumes in print.

A manga adaptation by Sergei began in Comic PASH! web magazine in March 2018. The fifth volume also shipped on September 25.

Seven Seas Entertainment licensed both the light novel and manga in English last October and released the third novel and manga volume on October 27 and November 10, respectively.

That's good news. I don't why I missed this.

I'm at episode 7 and I'm having fun watching this cute and heartwarming anime. Need more fuwa fuwa in my life.

Thanks for the final episode of Kuma Kuma Kuma Bear (The Bears Bear a Bare Kuma). In spite of that, I didn’t enjoy the first season as much as others did, but it was fun 12 episodes. I’m looking forward to the 2nd season.

I wanted to enjoy more the first season. I'm not going to watch a second one

Really looking forward to this. The first season was heartwarming and great in general. I hope they "speed run" the content a little less in the 2nd season though.

I can't believe they're coming back for more after that unmitigated disaster that was Season 1.

I can't believe such boring drivel got sequel so fast.

Punkuin said:
NG_Chloe said:
Punkuin said:
Was not expecting this. I hope that there's a fighter focus on an actual story in 2nd season.

I don't think it's that kind of show though

according to source readers, there’s more of a plot.

Interesting. I'm curious what that entails

Punkuin said:
Was not expecting this. I hope that there's a fighter focus on an actual story in 2nd season.

I don't think it's that kind of show though

I'm glad this is getting a second season 😊

Something I really wanted and glad we got it.

Well deserved, one of the better show this season, beary cute!

A surprise to be sure, but welcome one.
EMT2 surely redeemed itself. Last time they made somewhat decent anime was in 2017.

Great news. I enjoyed this one a lot so I'm looking forward to some more bear stuff.

This was unexpected but great news. I'm looking forward to this

I didn’t enjoy the 1st season as much as others did, but it was fun 12 episodes. I’m looking forward to the 2nd season.