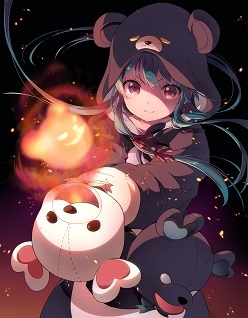 The wraparound band on the 14th volume of Kumano's Kuma Kuma Kuma Bear (The Bears Bear a Bare Kuma) light novel announced a television anime adaptation for the series on Tuesday. An official website for the anime series also opened, revealing a special illustration by 029 (pictured).

Synopsis
Fifteen-year-old Yuna prefers staying home and obsessively playing her favorite VRMMO to doing anything else, including going to school. When a strange new update gives her a one-of-a-kind bear outfit that comes with overpowered abilities, Yuna is torn: the outfit is unbearably cute, but too embarrassing to wear in-game. But then she suddenly finds herself transported into the world of the game, facing down monsters and magic for real, and the bear suit becomes the best weapon she has! (Source: Seven Seas Entertainment)

Kumano began writing the comedy fantasy novel on the Shousetsuka ni Narou website in October 2014. Shufu to Seikatsusha published the first volume with illustrations by 029 (Hataraku Maou-sama!, Inou-Battle wa Nichijou-kei no Naka de) under its PASH! Books imprint in May 2015. Kuma Kuma Kuma Bear has a cumulative 600,000 copies of its volumes in circulation.

Seven Seas Entertainment licensed the light novel in English in October 2019 and plans to publish the first volume on June 9.

I mean. It looks good, but is it actually..

The bottom of the barrel hasn't been scraped enough.

Nemesis16 said:
Pizzaholic said:
Isekai will be the death of anime

No, people like you will be the death of anime. You're just judging it based on the fact that the character goes to another world. That's it. You never read it to get a conclusion.

Oh yeah, it's a VN too: another plague in anime

Finally the bear is here😍😍

Am I looking at a new waifu?

Hoppy said:
Bear kigurumi embarrassing to wear? Nina Ichihara would have a word with Yuna.

So girls in VRMMOs is the new trend, that could be interesting.

I'm really surprised by this news. It's been a while since I've continued reading the web novel. I've only read up to 100 chapters of it and I barely remember what was the last thing I've read from that particular arc. xD

I imagined Kuma Kuma Kuma Bear to get its own anime someday. I thought the chances would be low, but here it is. An anime adaptation for it is green-lit!

I'd say this is a lighthearted isekai. And I have a feeling many anime fans might adore Yuna.

Now I await who will be the seiyuu that they would choose to voice Yuna. I might watch this. I'm not even watching plenty of anime since 2020 started. :p Yuna is looking cute in that key visual btw. :)

What a time to be alive.

Have read the manga for this and thought it was pretty fun.

While it might not be amazing for some by premise, I'm pretty open for it.

i haven't read that much manga so it's pretty exciting if a manga im reading gets an anime adaptation >.<

Another slice of life, bless! These days I can only watch those kind of shows.

This sounds stupid and derivative, but I'll watch it just for the bear gimmick.

I was bearly ready for the news

Pizzaholic said:
Isekai will be the death of anime

No, people like you will be the death of anime. You're just judging it based on the fact that the character goes to another world. That's it. You never read it to get a conclusion.


-Aincrad- said:
Hey, another anime that brainless people can sh*t on even before airing for absolutely no reason just because it is an isekai.

Yeah, like they did when Bookworm was announced and then "surprise" it was pretty good. It's as if none of those people read the source material and just basis their vision on synopsis. Which even then, as someone that never read something you still could get sufficient information about how the series is received with google and all for reviews and different opinions.


Hoppy said:
Bear kigurumi embarrassing to wear? Nina Ichihara would have a word with Yuna.

So girls in VRMMOs is the new trend, that could be interesting.

This trend isn't new though... it exists for over 5 years, be it for Isekai (which this is, as she's transported into the game) or simple VRMMORPG. Kuma Kuma Bear is from 2014 like the text says (which I think most people here just skip, even when there's many interesting information there) and many female Isekai exists before that, be it from male or female demographics. With that said, outside of Bakarina that came from a female imprint published by Ichijinsha, all the others that came recently and this one are from male imprints.

From what I have read of the manga . There isn't really a story its just a slice of life and goes on quests also bear related stuff

This isn't set in a VRMMO , it's like overlord the MC gets sent to another world but she has a VRMMO item as her "power" i.e the bear suit

I hope that the adaptation respects the essence of the story, which is to be a quiet slice of life with some eccentric elements, not to be another silly attempt at parody with references as they did in Noukin (watashi nouryoku wa heikinchi)

Those bear gloves really remind me of Okami-san and Her Seven Companions. Since Ryouko-san fights with some kitty gloves, kinda similar, maybe? looks cute though.

The age of fluff is better than the age of edge.