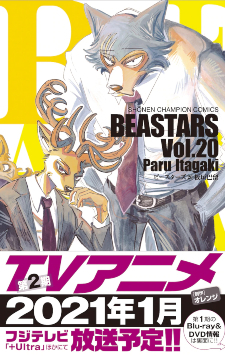 The wraparound band on the 20th volume of Paru Itagaki's Beastars manga revealed on Thursday that its second anime season will premiere in January 2021 on Fuji TV's Ultra+ programming block.

Synopsis
In a civilized society of anthropomorphic animals, an uneasy tension exists between carnivores and herbivores. At Cherryton Academy, this mutual distrust peaks after a predation incident results in the death of Tem, an alpaca in the school's drama club. Tem's friend Legoshi, a grey wolf in the stage crew, has been an object of fear and suspicion for his whole life. In the immediate aftermath of the tragedy, he continues to lay low and hide his menacing traits, much to the disapproval of Louis, a red deer and the domineering star actor of the drama club.

When Louis sneaks into the auditorium to train Tem's replacement for an upcoming play, he assigns Legoshi to lookout duty. That very night, Legoshi has a fateful encounter with Haru, a white dwarf rabbit scorned by her peers. His growing feelings for Haru, complicated by his predatory instincts, force him to confront his own true nature, the circumstances surrounding the death of his friend, and the undercurrent of violence plaguing the world around him. [Written by MAL Rewrite]

VIZ Media licensed the manga in English in November 2018 and released the seventh volume on July 21. The eighth volume is set to be released on September 15.

Come soon !!! And I'm also thinking of buying all the manga.

As someone who has kept fairly up to date with the manga, I must say I'm incredibly excited for the next season because the world-building and whatnot only improves.

Just ready for ppl to appreciate Louis for the incredibly well written character he is.

spectrojan said:
Damn is beastars even good though? I've heard it's pretty average
LOL wut? who even said that? the show gets nothing but praise almost everywhere, and it was a smash hit on Netflix WW. Personally I find it to be one of the best animes from recent years. Non-cliché, original and with well-written characters, unlike most animes that comes nowadays.

Even on this site it has a 8+ rating.

Not surprised, the first season was huge.

only read the manga gonna binge both seasons !

damn i gotta catch up with beastars AND the dr stone manga before january???

MichaelJackson said:
Enough material for a 2 cour season. The story will only get wierder and wierder in a jojo way, with lot of action and insanity.
And now I'm even more excited about the sequel.

More to look forward to. Another crazy sequel line-up awaiting us in Winter 2021.

Another good show for Winter 2021.Is winter 2021 gonna be the best anime season ever?
Definitely looking forward to more Legoshi.

spectrojan said:
Damn is beastars even good though? I've heard it's pretty average
Well it was absolutely the best show of fall 2019 and only a select few shows come close last year as a whole imho. Apologies if overhyping it because perhaps its not for everyone nothing truly is after all but if I were to break down the appeal of beastars it would be nuanced characters with characteristics both reflecting and on occasion cleverly subverting behaviour of real-life animals, compelling dramatic storytelling and tremendous worldbuilding. Good soundtrack, art direction and proving against he odds mixing 2d and 3d animation can be pulled off really well with the right talent behind it also doesn't hurt.

Damn is beastars even good though? I've heard it's pretty average

Goddamn winter 2021 is really THE season of sequels. Like, the only new anime I’m looking forward to is that spider isekai lol. I really hope none of these shows will be delayed by that time, and all will be ready to air right on schedule.

Welp, I have yet to see the first season...

Hmm looking forward to see how this goes.

Enough material for a 2 cour season. The story will only get wierder and wierder in a jojo way, with lot of action and insanity.

I believe this’ll first hinted from the creator’s interview on Netflix about a couple weeks back or so but it was nice have confirmation earlier this week nonetheless.

Definitely enjoyed the 1st season a lot so I’m just hoping of more of the same quality, if not better. Winter 2021 is looking really good too, I must say.