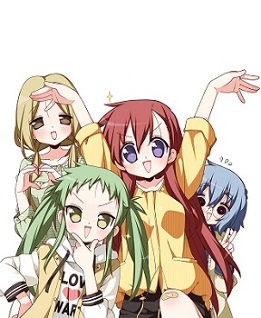 The anime centers on four girls at the full bloom of their youth, working hard to achieve their dreams as they struggle valiantly. In Japanese entertainment, Maesetsu! refers to an introductory talk or explanation addressed to the audience before the broadcast of television programs, usually performed by assistant directors and particularly comedians in variety or comedy shows.

Yoshimizu launched Lucky☆Star in Comptiq in 2004. The slice of life comedy series was also featured in multiple Kadokawa magazines including Comp Ace, Shounen Ace, and Newtype. The manga went on hiatus in 2014 due to a new project Yoshimizu was then developing. Kadokawa shipped the tenth volume in November 2013.

Kyoto Animation adapted the manga into a television anime in 2007 and an original video animation the following year.

No manga to read before anime?
Wonder if this anime can have same success as Lucky☆Star...

Absolutely love those character designs. They give me such a 2000's vibe.

How much merch will I need to buy to ensure that the next project is Lucky Star Season 2 ?

It's been so long since I seen Lucky Star! I think I was in elementary school when I first watched this on my Wii.

Anything lucky star related is always welcome! Hopefully KyoAni gets this!

These designs made me go - Whoa! I wonder what studio is making the thing.

Soooo once this anime is over will lucky star be yanked out of its 5 year hiatus?

Hmm, so a Lucky Star reboot in 2019. This could be really interesting. Count me in.

I can't exactly remember how I got into Lucky Star during my middle school days.
I used to play this game called "Fantage", and fans of that game would constantly put Lucky Star's music in YouTube videos related to the game. I also found out that our middle school had the first two volumes of the original manga (SOMEHOW).
So did I find out about Lucky Star through the Fantage community, or was it from my middle school's library? Who knows...

But either way, I really liked the Lucky Star four-panel manga from what I read of it back then. The character designs and art style are very memorable to me, there are some pretty funny parts of the comic (like the famous choco-cornet scene), and I really did like many of the characters.
So I'm pretty excited for this!! I did buy the Lucky Star anime recently, so I guess I'll be watching it while waiting for this new "Maesetsu" project.

I'm so hyped! Even the characters pictured resemble the Lucky Star characters!

epic epic epic, this pleases me.

I'm not the biggest fan of Lucky Star, but I do think that this can be fun to watch.

Oh boy, his will be very interesting. Lucky Star is my second favorite anime (#1 along with Lain in my heart). This is pretty unexpected news for me!

Lucky Star is one of my favourites anime ever, so I can't wait for this.

I'll try it out, it's been a long time since I've seen Lucky Star.

By the Lucky Star author? I'm in.

Oh this is promising !
Lucky Star was hilarious so I wonder how this one will live up