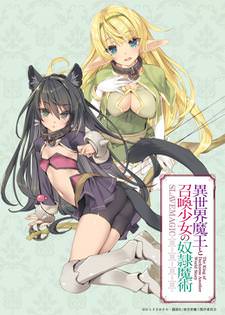 An official website has opened and revealed that light novel Isekai Maou to Shoukan Shoujo no Dorei Majutsu (How NOT to Summon a Demon Lord) is getting a TV anime adaptation. More information will be revealed at a later date.

Synopsis
In regards to the MMORPG Cross Reverie, Sakamoto Takuma boasted an overwhelming strength that was enough for him to be called the Demon King by the other players. One day, he gets summoned to another world with his appearance in the game. There, there are two people that insist "I am the real summon master." Takuma gets slave-turning magic used for summoned beasts cast on him by the girls―

However, the peculiar ability "Magic Reflection" is invoked! The ones that were turned to slaves were the girls!

Takuma was bewildered. He's the strongest magician but, he doesn't have any social skills. Panicking, the first words that came out were the ones that he used inside the game role-playing the Demon King?! "I'm amazing you say? Of course I am. I am Diablo... The one feared as the Demon King!"

This is the story the Demon King (acting) that would soon inspire the world and his other world adventure that he plunges through with his absolute strength, raise the curtain! (Source: MU)

The novel, written by Yukiya Murasaki, has been published by Kodansha and has released eight volumes so far with the ninth volume to be shipped on February 2. The series has also been adapted into a manga series drawn by Naoto Fukuda. The manga began its serialization in Kodansha's Suiyoubi no Sirius on June 24, 2015. The manga has released five compiled manga volumes with the sixth to be released on February 2.

J-Novel Club has been digitally publishing the novel in English since December 4, 2017. The manga adaptation has been licensed in English by Seven Seas Entertainment.

Somehow it could end up being a guilty pleasure (then again i have only touched the first chapter of the source so I don't know what happens later on).

from the very small bit of the manga i've read before, i can say that this might be halfway decent. i dont care much for the whole isekai spam, but i dont dislike it either, as my favorite animes have been isekai. i doubt the anime can top whitepods translation but i'm definitely watching this on release.

Another Isekai anime?
Yaaaaawwwn...this was so 2016.

More of this kind it is then...

I've read this manga, and i cant say i have high hopes for it. In manga its not like when i watch anime, where i just cant drop something if i started it. But with manga i only read if its good or enjoyable.
So i was just thinking about dropping this one while reading but i managed to pull through.

I'd say plot is not that good. There will be one plot twist near what seems to be the second half if it will have 12 episodes, but it wont matter so much, so its more likely a twist that will assist the comedy side of things.

A good animation can save this one, but i cant imagine it since the manga's artstyle wasnt top-tier, i'd say sloppy. Im not talking about the art here. The mangaka did a good job, but the artstyle was too childish so no matter how hard the mangaka worked it would still end up not being that serious. (I know the manga has no relation to the anime whatsoever but im only talking about how hard it is for me to imagine it
with a ,,Violet Evergarden" grade animation, or even near that)

I love neko girls so im in for the loli (is she?), otherwise the ,,blonde elf with big boobs" is pretty generic and nowadays can be found in every work, not just anime. I mean even her personality is that shy one ...
hmm i wonder where we saw that already?

It has been a while since i've read it so i'll probs watch it anyways because i dont remember what happened. (Assuming the season its gonna air in wouldnt contain as much promising series)

I'll look at it for the Elf.

Don't know that one, not sure to be interested tbh. If it's harem, I'm definitely not, ecchi focused, not either. If it's neither, then why not.


GoddessofMayhem said:
Ayyy another isekai! I wonder will we ever have one without a harem...
Did you saw a harem anywhere in Youjo Senki last year?

Oy vey another one of these.. Whatever... No thank you. I'm not falling for this one again.

tragedydesu said:
GoddessofMayhem said:
Ayyy another isekai! I wonder will we ever have one without a harem...
Kenja no mago will have an adaptation
It's an isekai without harem

Oh good! I'll try that one out.

GoddessofMayhem said:
Ayyy another isekai! I wonder will we ever have one without a harem...
Kenja no mago will have an adaptation
It's an isekai without harem

Fuck this. That blonde female character is so ugly.

Wow really animators do like to make low funding Isekai animes, there are many good LN that can do pretty decent animes but really why you guys have to choose some generic ones. Mitou Shoukan://Blood Sign, 86 etc you guys sure know how to pick an LN and make it into anime

Ayyy another isekai! I wonder will we ever have one without a harem...

Anw unless the animation and the art are good i won't watch it
Sadly it's not neat as Goodreads, having that score is quite a red-flag to majority, that said the site isn't reliable at all when it comes to scoring since majority of them prefers Chinese and Korean novels, so it's just a preferential score.

I can't wait for this to be adapted I'm so excited.

When Intelligent Japanese Novels gets adapted, it's a flop(Ahem Grancrest Senki), but WHY THE FUCK DO THEY ADAPT THIS KIND OF NOVELS... fuck it

even the Novel Readers hate this shit
https://www.novelupdates.com/series/isekai-maou-to-shoukan-shoujo-dorei-majutsu/
Rating(3.7 / 5.0, 354 votes)
that rating is already a red flag normally even the rating system is shittier than this site

I've seen the manga and I dropped the manga

Death March is 10x better than this, imagine how worst Isekai Maou to Shoukan Shoujo no Dorei Majutsu is.
3.7/5 is a bad score now ?lol

Kuma said:
SkyFullOfStars said:
you know what I can't wait for?

ahh.. uhh... the one popularize isekai fro niche audience is kyou kara maou... there should be a lot, but i doubt they are translated...

lol yeah it's rare for me to find japanese ones
I've read a few Chinese ones though. I think there's one adaptation in the planning for Scum Villain which I'm looking forward to.

Kyou Kara Maou was a weird one. I couldn't get into it and I tried 3 times.

SkyFullOfStars said:
you know what I can't wait for?

ahh.. uhh... the one popularize isekai fro niche audience is kyou kara maou... there should be a lot, but i doubt they are translated...