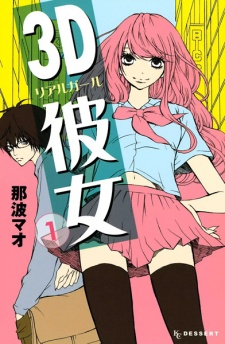 The official website for Dessert magazine has revealed that manga Real Girl is getting a TV anime adaptation for 2018.

Synopsis
Tsutsui Hikari is an otaku, and he mostly avoids social life. Hikari has only one friend at school, who is also a social misfit, and he is mocked brutally by most of his classmates for being creepy and weird. One day, he ends up having to clean the school pool with Igarashi Iroha, who appears to be pretty much everything he hates in real-life girls. She skips school, has a blunt manner, doesn't have female friends, and seems the sort to be promiscuous. However, she is friendly to Hikari, and even stands up to the people who make fun of him. Hikari's bitterness and trust issues lead him to say pretty harsh things to Iroha, but she never dismisses him as creepy. After a while, it starts to look like Iroha may become his first real-life, 3D girlfriend! Will he be able to handle it? (Source: MangaHelpers)

The series is drawn by Mao Nanami and ran for 12 volumes between July 2011 and May 2016 for a total of 48 chapters. It has also been published digitally in English since May 2017 by Kodansha Comics USA. A live-action movie is also planned for 2018.

This is a new type of shoujo.A shoujo manga that seriously borrows inspiration from The World God Only Knows.

I'm actually surprised at the number of shoujo that took inspiration from Twgok.(Gekkan Shoujo,Kiss Him Not Me)

Maybe the genre is not dead,and TWGOK gave the genre the live line it needed.

Also, give it a good studio, director and budget, please...it deserves.

For a second there I thought it said that Takehiko Inoue's manga ''Real'' is getting an anime. Way to disappoint myself.

lady-leen said:
I didn't thought this will get animated and it's a shoujo! every shoujo manga now receive live-action movie! even this have a live-action movie that will come in 2018!!
this is not the best shoujo manga but I hope to see another interested shoujo to get anime cause I missed the old days.... recently it's rare to see shoujo manga animated ><
If you think that Shoujos are rare then look at Josei anime, they are pretty much a dying breed.

Yh seems like an complete adaptation which means.......
That we will get a completed romance series so here iz my question:
Does this series go further with romance?

luinthoron said:
MortalMelancholy said:
Lmao "Real Girl" is such a shitty English translation.
I'm not too much of a fan of this name either after having known the series so long under another name, but it's right there in the Japanese logo as furigana, so sadly it's not just a translation.

Isn't the kanji for this title the same as the one used on Saekano's title? The words used here is 'Real Girl' but for Saekano it is 'Heroine'?

even it's on my radar for long time, i kinda reluctatn to try it because affraid too much drama.... can sombody tell me?

luinthoron said:
MortalMelancholy said:
Lmao "Real Girl" is such a shitty English translation.
I'm not too much of a fan of this name either after having known the series so long under another name, but it's right there in the Japanese logo as furigana, so sadly it's not just a translation.
My god, you're right. What a horrific pun.

MortalMelancholy said:
Lmao "Real Girl" is such a shitty English translation.
I'm not too much of a fan of this name either after having known the series so long under another name, but it's right there in the Japanese logo as furigana, so sadly it's not just a translation.

Lol! I just started reading it yesterday and now and now it will have an adaptation.

Oh yay! Finally a shoujo manga anime adaptation. Though I think this one can be enjoyed by guys too. I hope more manga from dessert magazine get adapted someday too. Namely taiyou no ie.

Lmao "Real Girl" is such a shitty English translation.

OMG!! i've been waiting for this series to get adapted XD
i hope the adaptation can cover all of manga chapters

Looks decent and the manga is finished already? Back to reading it again since I dont remember that much.

Synopsis is pretty okay, not something amazing but it's something that I can go and dig with.

And hearing that this is a manga that have already finished then it's most likely going to get an complete adaption.

Hopefully this is a sign for more completed manga to get an adaptation.

Huge surprise. Manga is okay but never thought it would get an Anime Adaption. I have a feeling it will be... not good. But live in hope...

Why not, it should get the full adaptation treatment so im on board just for that.