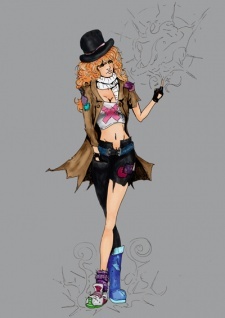 Lucumo May 12, 2019 9:51 AM
That's pretty specific already then though and doesn't really conform with your claim. Of course, there are also anime with those characters out there. The thing is that they usually don't work well in series and as recurring side-characters, they wouldn't work at all. There is a minor one in Turn A Gundam, Yu Yu Hakusho (not too minor here) and IIRC there is one in Code Geass. However, the relevant ones are in movies such as Momoko, Kaeru no Uta ga Kikoeru yo. and Happy Birthday Inochi Kagayaku Toki. In general, movies are where you will find more realistic dealings with disabilities as they tend to play a major part.
Yeah...but why do you write it as "headcannon"? I thought there was an actual reason for that (especially since you did it again).

MAYOIII Dec 13, 2018 12:27 PM
dayum
same as you i suppose lol
im practicing smash because we are going to have a smash tournament among us cousins during our family reunion
who's your favorite? are you trying out new characters as well?
i'm currently practicing isabelle and corrin rn
they are pretty fun to play

MAYOIII Dec 12, 2018 10:24 AM
hmm the changes in each patch makes it less balanced imo and I think I cannot stand repetitively playing on the same maps with almost the same playstyles every time
not really a big deal for me because I play other games too
oh yea, what games are you playing right now then?
do you play console games?

MAYOIII Dec 10, 2018 6:01 PM
damn you seem to be been away from league for a while
and yes techniqually it has started
it gets more and more unplayable to me and I quitted league last season
league aside
I realized you're watching part 5 now as well
are you liking on it so far?

MAYOIII Dec 10, 2018 10:36 AM
sounds like an interesting champion
damnn Im getting these feelings from these part1 throwbacks
speedwagon definitely deserves more spotlight (hes the very definition of a friend, and hes being helpful after his death via his foundation)
is she ad/ap? xd
gimme the link i wanna see her story
oh im a bit curious
what rank are you in league? do you main support?

MAYOIII Dec 10, 2018 9:45 AM
oh
champion concept
well thats a really odd one
her style reminds me of speedwagon from jojo for some reasons
* and I realized you do read jojo as well xD
thats just an original art from a random artist on pixiv
thats her only work I guess but I think its so befitting to my forum set and I picked it

MAYOIII Dec 9, 2018 9:42 PM
well
somehow you managed to be the only user mentioning my name after I disabled all the mention notifications lol
so I clicked on your profile and i ended up here
im curious which character is that in your profile pic?

WeeabooColin Jun 25, 2018 5:16 AM
Lol Fairy Tail is the worst, but BNHA has the achievement of having the worst fanbase

WeeabooColin Jun 22, 2018 9:45 AM
Hey, thanks for reading it. I actually think Soma is pretty bad, but it does more things with it's school setting than BNHA does. The setting of that show is pretty retarded and people just like it because it does anything and everything in it's power to have as much main stream appeal as possible. I think it's trying to do some weird Harry Potter esque arc, just replace the villains with death eaters and the heroes with wizards, and we will have a really stupid rip off.

I'm pretty excited for part 5 of Jojo because that is when shit gets insane.

Rarusu_ May 12, 2018 6:41 PM
Bourmegar said:
Well I believe in a world of equal opportunities, in other words: Meritocracy.
But the world we live in now (or at least in the west) also gladly has systems in place for less capable people like those who have a handicap Like you and me (I have autism) and these systems like Social Work enviroments and etc should exist imho.
Don't take for granted that autism (high-functioning) is a handicap. It might be in the here-and-now modern world because nowadays it's so important to have "social competence" (aka being very communicative and capable of manipulating people).

It's just amusing to me.

Nyu is so fun to trigger tho
All Comments