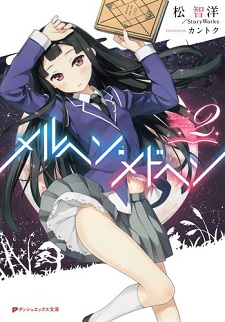 The wraparound jacket on the second volume of Tomohiro Matsu's Märchen Mädchen light novels, which goes on sale on Tuesday, has announced an anime project based on the series.

Shueisha began publishing Märchen Mädchen under its Dash X Bunko imprint in February. The magic fantasy series, whose story is based on original plans drafted by Matsu prior to his death in 2016, features character illustrations by Kantoku.

Synopsis
When the two girls meet, magic begins. Hazuki Kagimura loves stories, an orthodox girl who is overly imaginative. Because her relationship with her new family does not go well, the environment sends her toward the stories in which she spends her days. One day after school, Hazuki gets lost among the bookcases of the library, leading her to a mysterious school where meets Shizuka Tsuchimikado. It is a magic school where girls (called "mädchen") are selected by the magical texts from which the world's stories are born. Hazuki herself is said to be chosen by the book of Cinderella. In order to become a true magician, Hazuki becomes friends with Shizuka and begins her new life at the school.

swordhermit said:
Not sure what to think of this, the author dying means that this will forever be left incomplete canon-wise but it may be fun so who knows...

The story and draft is already completed years ago. Check ANN, it is recently adapted to LN though.

Not sure what to think of this, the author dying means that this will forever be left incomplete canon-wise but it may be fun so who knows...

Looks interesting. It's sad that the author died. :(

Look okay, F to the author.

This looks like it can be somewhat fun or enjoyable.

Robiiii said:
Oh yeah apparently this is by the author who has died recently :/
What? Didn't actually knew about that :L Man...

Sounds interesting, but it's a light novel adaptions..

First we have Imouto Sae Irebai Ii, now, we have this.

I hope we get more Kantoku illustrated LNs adaptations

look intresting. will wait for more preview before judge it

the characters design is so adorable
hope is something decent

Oh yeah apparently this is by the author who has died recently :/

Reminds me of LWA but I can hope this will be another great show. Somehow expecting 2-cour.


I wonder what will we see from the draft that author made and he also died... well I think there is good reason why they are adaptating this LN.

But i won't expect something bigger than this pv

That Kantoku design, But I need to see more.

Very excited for this >w<

Well, at least the Synopsis doesn't give the "OP Male MC" vibe...

Really not that much to decipher from the PV, but I'm interested. Looks like it could be quite cute, though the concept has potential to become convoluted. Nonetheless, I like the storybook influences, as well as general character design, so here's to a successful run!