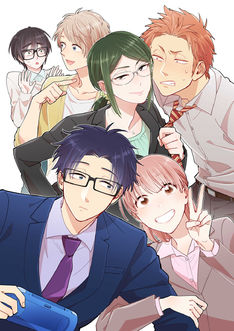 It has been announced via Tokyo Shinjuku Alta Vision on Thursday that Fujita's Wotaku ni Koi wa Muzukashii (Love is Hard for an Otaku) will get a TV anime adaptation to broadcast via Fuji TV's noitaminA timeslot. The cast members that have been used in the manga's promotional videos will reprise their roles in the anime. The anime is slated for Spring 2018, according to a CM broadcasted on Friday during noitaminA broadcast.

Synopsis
After discovering that they work at the same company, a gaming crazed otaku and a fujoshi reunite for the first time since middle school. After some post-work drinking sessions they begin dating, but will it be a perfect relationship for the two?

Wotaku ni Koi wa Muzukashii originally began its serialization on pixiv in 2014. The serialization continued in comic POOL, which Ichijinsha launched with pixiv, on 2015. Ichijinsha began releasing physical volumes in April 2015 and there are three compiled manga volumes released so far, with the fourth releasing on July 26. Its web version received first place in "Web Manga Desired to Get a Physical Release" section of Tsugi ni Kuru Manga Award (Manga that Comes Next) in 2014, and tops the 2016 Kono Manga ga Sugoi! ranking in the Female Readers Category in 2015.

Troll12345678966 said:
So i was just scrolling through livechart and came over this. Love the concept and cant wait, but i have a question. Is it worth it to wait untill the anime arrives or is it more worth it to just read the manga right here and now?? I am so hyped for this series and cant wait, but if people say that waiting for the anime and watching it that way is the way to go then im just gonna have to wait. Opinions??
Read the manga, it can't hurt you to try it.

So i was just scrolling through livechart and came over this. Love the concept and cant wait, but i have a question. Is it worth it to wait untill the anime arrives or is it more worth it to just read the manga right here and now?? I am so hyped for this series and cant wait, but if people say that waiting for the anime and watching it that way is the way to go then im just gonna have to wait. Opinions??

Yeeeey! So excited to see this!

Anyway I just don't get the appeal for this manga, the comedy at the very first chapters was pretty good, it got worse chapter by chapter
I hope that as an anime the comedy will work better


just a quetion sir... if there are mangas that sells better than wotaku ni koi, and don t have anime adaptation yet, i ll give you a point, if not, so please take your words for yourself
Tensei Shitara Slime Datta Ken
It isn't that good either but it is better than wotaku imo

I like that one, but, it doesn't sell better than wotaku bro, it s hard, but otaku world is working all about money, and tensei is a light novel no??
No it's a manga as well

Sorry, but im pretty sure that it s a novel that has a manga, it has a Web Novel too '-'

Well I am looking forward to the Megane-and her Boyfriend, personally the main-MC couple is okay, atleast the guy is, I hate the Fujo, well I do hate Fujos in general, but that won't stop me from enjoying it up as long as the Megane and her Boyfriend is in the show, I hope to they never cut off their role even one bit, they steal the show for me strongly, any day any second.

Wasshio said:
alpha_shadow said:
Xenocrisi said:
please no.... The manga is so boring
Oh no, something I didn't like shouldn't get an anime, hypocrisy much?
I mean just to not go and mess up with the other convos, aren't we all hypocritical in a sense? It kinda applies to anything in a medium. just me tho.

Major respects, it's not just about getting or not getting an anime, their is more than it to that, for every anime is made of a bad manga, about dozen good shit are left alone to never be spoken of ever.


Robiiii said:
Not sure bout why she has to be a fujoshi, but probably the combination with an otaku might make some funny scenarious. Also this manga was ranked nr 1 in Kono manga ga sugoi for females so it should be fine.
Since theyre adapting Nr. 1s from those Kono Sugoi rankings they might as well do Dungeon Meshi, no? :/

If this gets an anime and Dungeon Menshi does not, I will say anime is really gonna be doomed soon if not only later somehow.

About dang time, I knew they wouldn't let this good manga become anime-less
But I thought they would have waited for a little longer for more chapters to be released or else there's a possibility that it has a different ending than the manga.

Happy for more work sol.
A-1 did Servant Service & that was quite fun.

Oh nice. The manga was pretty nice so it's great to see it's finally getting an adaptation. The cast list is pretty decent as well so this seems like it could work really well.

The manga caught my attention. I'm looking forward to this!

Ehh an anime about otaku and fujoshi love story. Might check it out especially with Sugita in it!

So much hype I will gladly watch.

Seems like something i'll enjoy. Looking forward to it :D

ow right dude the hype is real! i just stumbled upon this manga yesterday and look at this anime adaptation announcement! next year will be good as hell, yeah!

Koyanagi and Seo have same seiyuu.