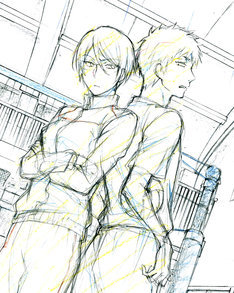 Amazon Japan has listed that seventh volume of Wotaku ni Koi wa Muzukashii manga will bundle an OVA. It will be released on March 29 of next year and will adapt the chapter on the high school time of Tarou Kabakura and Hanako Koyanagi titled Youth.

Wotaku ni Koi wa Muzukashii originally began its serialization on pixiv in 2014. The serialization continued in comic POOL, which Ichijinsha launched with pixiv, on 2015. Ichijinsha began releasing physical volumes in April 2015 and the sixth volume went on sale on August 5.

The manga series has received TV anime adaptation by A-1 Pictures and broadcasted for 11 episodes this spring.

The manga's web version received first place in Web Manga Desired to Get a Physical Release section of Tsugi ni Kuru Manga Award in 2014, and topped the 2016 Kono Manga ga Sugoi! ranking in the Female Readers Category in 2015.

Offline
May 2017
808
Yay Kabakura and Koyonagi focused story, I liked this pair compared to the other 2.
#6
FuMomo-kun

Offline
Mar 2016
1651
More than an OVA, I want a second season. I hope they have enough content for that.

But, I also want to watch the OVA!

I have noticed that A1 Pictures decreases animation quality of an anime every time they make a new season of it, but I hope they don't do it to this precious story. (That is: IF they make a second season!)

I really enjoyed the first Season, so I’m looking forward to this OVA episode. Hanako and Kabakura’s relationship had been really intriguing to watch, so this should be a splendid watch!

Here’s to hoping that a Second Season will be announced soon!