Manga 'Houseki no Kuni' Gets TV Anime for Fall 2017 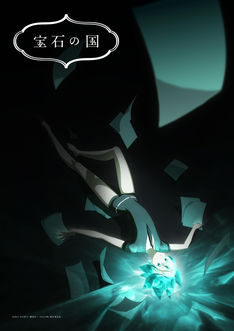 An official website for Houseki no Kuni has opened and announced that the manga by Haruko Ichikawa will get a TV anime for Fall 2017.

Synopsis
In the distant future, a new immortal and genderless life form called Gems populate the Earth. The 28 Gems must fight against the Moon Dwellers, who attack them regularly to abduct them and to turn them into decorations. Each Gem is assigned a role, such as a fighter or a medic.

Being only 300 years old, Phosphophyllite is the youngest of the Gems and has no assignment yet. He wants to help to fight the Moon Dwellers, but is too weak and brittle for battle. One day the master of Gems, Adamantine, assigns him the task of creating a natural history encyclopedia. (Source: MU)

Houseki no Kuni has been serialized in Afternoon since October 2012. The manga placed tenth on the Kono Manga ga Sugoi! 2014 rankings in the male category, and was nominated for the eighth Manga Taisho awards. The series currently has six compiled volumes in print, with the seventh volume scheduled for May 23. The manga has been licensed in English as Land of the Lustrous by Kodansha Comics USA. The first volume is set to be released on June 27.

No, don't be that guy that hates it, because you think it is trying not appeal to only one specific group. Houseki no Kuni is different and does not talk about sexuality or anything. It talks about humanity and how the gems were made and the survival of theirs kind.

HnK manga began publishing in 2012. SU pilot went on air in 2013. Similarities in concept are either a coincidence or... dunno, maybe Rebecca Sugar looked for some inspiration in Japanese manga. But it certainly wasn't the other way around.

All in all, I'm really excited for this.

Pretty stupid reason to ignore something.

I'm so happy tho, HnK deserved an anime and I'm sure it will be good!

i just wonder why?

why cgi?
i'ts not like normal animation wouldn't work, the pv was quite a success really... so why?


only hope left is that it is decent cgi, but that's not in my expectations.

Shadow-Chan said:
11k Twitter followers so much hype already. I watch if no full CG.
I wish all are boys I can't wait for cast.

Lel, too bad the studio only does CG

Seriously stop with the Steven Universe shit, Houseki no Kuni is beyond such BS.

Regarding the he or she: As they do not have genders or even any concept of it, both don't really fit. In japanese, neutral pronouns are used, so an "it" or "they" would be the closest. It will be interesting to see what Seiyuu they use.

Regarding 3DCGI: I guess this could be another great show many people will miss because they are 2D nazis and declare every visual style that is a little outside their comfort zone to be bad.

11k Twitter followers so much hype already. I watch if no full CG.
I wish all are boys I can't wait for cast.

NG_Calen said:
Knighted said:
Wait the mc is a he?

It says that all the gems are gender-less, I assume the "he" part was a typo, or they just decided to word it that because coming up with a word that fits gender-less was too hard, or the character identifies as a boy

The manga summary say its a she, so meh thats confusing ==

The manga had nice art. It has an interesting concept

Actually relieved that it's CG because I honestly think hand drawn won't fit. Will watch. I liked the manga.

Hongu said:
Pullman said:
John_2001 said:
@Pullman Were you praying for something like this to happen or what? lol

Because it's similar to SU or what?
I doubt this is gonna even compare to SU but who knows.

It would have to be absolutely abysmal to not at least be a bit better than Steven Universe. Though considering it's full CG, that might actually be a possibility..

Pullman said:
John_2001 said:
@Pullman Were you praying for something like this to happen or what? lol

Because it's similar to SU or what?
I doubt this is gonna even compare to SU but who knows.

It would have to be absolutely abysmal to not at least be a bit better than Steven Universe. Though considering the staff and the fact that it's full CG, who knows what will happen..