'Kyoukai no Rinne' to Receive Third Season for Spring 2017 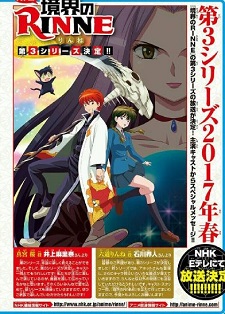 The 44th issue of Shounen Sunday, which will be released on September 28, 2016, will announce that Kyoukai no Rinne will receive a third TV anime season to air in Spring 2017.

Kyoukai no Rinne started its serialization in Shounen Sunday in April 2009 and is written by Rumiko Takahashi. The manga has released 32 volumes, with its latest recently released on September 16, 2016. Viz Media has released the manga in English under the title RIN-NE since October 20, 2009. The manga first received an anime CM adaptation in October 2009, and then later received its first TV anime series from April 2015 to September 2015. Its second season, which started Spring 2016, will end this Saturday on September 25, 2016. Sentai Filmworks licensed both seasons.

A novel version has been published by Shougakukan Junior, which adapted the first nine episodes of first season in 2015, with total of three volumes.

Only reason because it's takahashi. Otherwise the material itself is pretty mediocre.

I might as well watch the past two seasons :L

Kuma said:
wakka9ca said:
CyberZeta said:
Rumiko Takahashi lost her talent since Inuyasha, i won't bother.
Rinne started slow but is actually really good. It's closer to her older works before Inuyasha.
so, is second season any imporvement from first season? season 1 really put me to sleep...
i enjoy it as a nice little relaxing show that occassionally gets a laugh out of me here and there, but if you were so bored of it first season you wont have your mind changed by the 2nd nor 3rd season.

Maybe its stockholme syndrome kicking in but i wont deny its always been a solid 6/10, 6/10 is good obviosuly just nothing to really put effort into unless you already were enjoying the ride to some degree

I think, Rinne is untouchable. The author, the fact that it airs in a very favourable time slot in Japan and the popularity there. I'm happy for a season 3, this last episode finally showed true development between Sakura and Rinne.

I love Rumiko Takahashi! Urusei Yatsura and Ranma 1/2 were brilliant. Inuyasha was fine. Kyoukai no Rinne is BORING as BORING can get. Terrible news.

Kuma said:
wakka9ca said:
CyberZeta said:
Rumiko Takahashi lost her talent since Inuyasha, i won't bother.
Rinne started slow but is actually really good. It's closer to her older works before Inuyasha.
so, is second season any imporvement from first season? season 1 really put me to sleep...
Rinne is a series that grows on you and only becomes enjoyable as you learn about the characters. In this sense it's similar to Gintama.

Not surprised. Kinda glad too. The episodes in the second season seemed to have a better pacing than they did in the first season. Or put another way, they seemed less boring and more enjoyable.

Ugh, I might just wait until it's finished so I can binge-watch/listen to Rinne. I've gotten bored with the show, but it's nice for background noise while I'm drawing.

OMFG YES. So hyped for Hitomi :o Now I can rest easy. I hope Sentai will release the 2nd season on BD soon, I've already rewatched the whole first season on BD.

I'm down for this.

glad to hear there will be a third season. there may not be over the top productions or battles in this anime but it is always fun to watch. the glim spanky ed song is too good. the stories are catchy and the characters on the light hearted side. cant wait for the next season and new music.

I think they are planning to adapt most of the manga at this point. Bet it will be another 2 cour as well.

When I heard that it'll have a big announcement, I had a feeling that it'll be a third season. Hopefully once the manga ends, they adapt up to the end of the series.

After seeing few days ago that it will have another big announcement in the next days iam not really surprised of this news since they also have more then enough material to use and as long as they get good ratings while its airing iam sure we will get even more in the future as long as they have the material to use :)
As it goes for the anime it aint anythin special but still its ok, at times it feels really feels like its repeating the same thing and maybe gets a bit better once we get new characters. Also the romance part is pretty much nonexistand we only get some hints here and there and thats it.
So hopin that 3rd season will get abit better^^

Oh wow this is pretty unexpected lmao. Eh I kinda like it so good news for me I guess.

How can a low selling, mediocre anime like that get 3rd season ! And it is 2 cours long !!