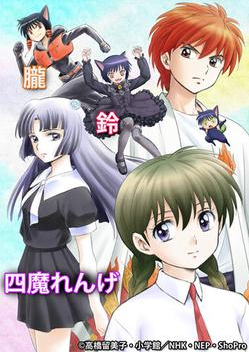 According to a post made on NHK's anime blog, a second season of supernatural anime Kyoukai no Rinne (RIN-NE) has been announced for Spring 2016. The series will be adapted into 25 episodes and include new characters. A key visual for the second season has also been revealed.

Kyoukai no Rinne is a manga written by Rumiko Takahashi which began publishing in April 2009. The series runs in Weekly Shounen Sunday magazine and currently has 26 volumes in print. The manga's 27th volume will be published on September 18, 2015. Kyoukai no Rinne had already received a 25-episode TV anime adaptation for Spring 2015, and the final episode of the first season will air on September 19, 2015.

Synopsis
As a child, Sakura Mamiya mysteriously disappeared in the woods behind her grandma's home. She returned safe and sound, but since then, she has had the power to see ghosts. Now a teenager, she just wishes the ghosts would leave her alone! At school, the desk next to Sakura's has been empty since the start of the school year. Then one day, her always-absent classmate shows up, and he's far more than what he seems! (Source: MU, edited)

Thank god for this. The only anime in the last season that hyped me to watch it until the very end.

haha!! Rinne is such a weird anime :3 it has the weirdest logic - also gotta love those old-style character designs

yes this is good news to me since I really like this anime! :)

yes this is good news to me since I really like this anime! :)

Well I'm glad for those that enjoyed the show. It is nice when something you enjoy gets another season.

But for me....nope. The show was just so boring. The cast was boring, the story was boring, the action was boring, etc. Didn't work for me, but clearly worked for enough other people to get another season. So....good for it.

The last few episodes were quite funny actually. If they can keep up with it then it'll surely be better than the first season.

MADE MY DAY! SO EXCITED! :D

I adore this show, seriously. I'm so happy.

Although I admit majority of the episodes are quite boring or bland, or downright cliche/predictable, there are some parts here and there that make watching it worthwhile.

edge13 said:
Nintendofan204 said:
danieltortoisee said:
It will probably be no different to the first season, which has started to get seriously boring now, so I really don't see the point.

Besides, is it even remotely popular to justify a sequel?

My thoughts exactly. This show was pretty decent at first then started to slow down. It got a little better, but then it started to get boring and has been boring for the past eight or so episodes. I'm seriously sick of it now.

I guess I will watch this, but I'm pissed that this show is first to get a second season out of all the other airing anime I am watching right now. Like, really? So many great anime are only 1 or 2-cour and this show gets 50 episodes so quickly... I mean, is this show even popular in Japan? I just hope the second season is better than what the show has been recently. If it's not, I'm not sure I'll be able to watch the whole thing.
do you like the manga though?
if not,then it probably not your cup of tea.
it is a manga adaptation anyway.

I haven't read the manga, but I decided to watch it caused it looked interesting enough. I guess it just isn't my type of show...

May have to watch now just for more Rumiko.

Even if Rumiko Takahashi makes a series worse than mars of destruction or something, it would still get multiple seasons XD
The privilege is real :'(

You can hate all you want because we, fans, will stil have a second season even if you do :)

danieltortoisee said:
It will probably be no different to the first season, which has started to get seriously boring now, so I really don't see the point.

Besides, is it even remotely popular to justify a sequel?
Maybe with children? You're right that it got very stale in many previous episodes. From time to time, there is a good one but this show really can't even compare with Ranma, Inuyasha or Urusei Yatsura. Those shows were hundred-times more funny with its clever humour whereas here we almost have the most childish comedy of late.

And the fact is the ratings weren't so good. But it's public TV and they really don't care much about sales and it's heavilly sponsored.