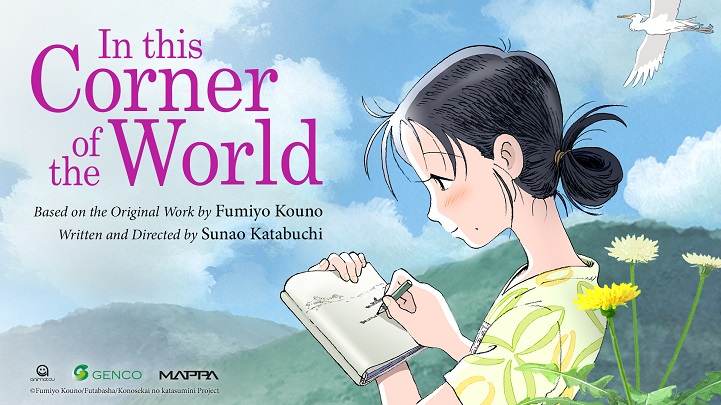 Animatsu Entertainment, a London-based international rights management company, announced at the Annecy International Animation Film Festival on Tuesday that it has acquired the worldwide distribution rights to the upcoming anime movie Kono Sekai no Katasumi ni. A press release also revealed that the movie will open in theaters in Japan in October 2016.

Kono Sekai no Katasumi ni, to be distributed in English as In This Corner of the World, adapts the historical manga drawn by Fumiyo Kouno. The series was originally published in Manga Action between 2006 and 2009 and has been compiled into three volumes. Kouno's work received a Manga Division Excellence Award at the 13th Japan Media Arts Festival in 2009, and the series was also adapted into a live-action television special in 2011.

Production of the anime adaptation, led by director Sunao Katabuchi, was first announced in 2012. A crowdfunding campaign held in 2015 collected over 39 million yen, nearly double the original goal, to support the movie's production at animation studio MAPPA. Animation production and planning company Genco is also sponsoring the project.

Kono Sekai no Katasumi ni follows the adolescent Suzu, who in 1944 moves to the small town of Kure in Hiroshima to live with her husband's family. Suzu's life is thrown into chaos when her town is bombed during World War II. Her perseverance and courage, however, underpin this heart-warming and inspirational tale of the everyday challenges faced by the Japanese in the midst of a violent, war-torn country.

I saw this in Japan and this is hands down the best Japanese film of 2016 (Kimi no na wa, Shin-Godzilla, Koe no Katachi were all good in their own ways in varying degrees, but this is a qualitatively better film). It is better than the Grave of the Fireflies, which had been probably the best war-related Japanese animation film. It could be the best Japanese animation film ever, but I am not yet decided on that.

The Japanese movie journal Kinema Shunpo had all reviewers giving 5/5, something which rarely happens.

This is a true classic, which should be watched in good quality screens with audio.

Animatsu is a sub section of Manga UK, the (currently) biggest Anime distribution company in the UK, they're already knee deep in Anime :P

I was just making a generalization and they can easily go from distribution to producer.

hope as good as barefoot gen... only exist 1 chapter translated out of this and still really blurry about where the story goes...

Saw a preview clip at Anime Boston at the MAPPA founder, Masao Maruyama's panel. Looked pretty good and Maruyama said that the director is great so I am interested in seeing how it will turn out.

Neat, had not heard about this project before.

its better worth it for all the times spent on it.

Animatsu is a sub section of Manga UK, the (currently) biggest Anime distribution company in the UK, they're already knee deep in Anime :P