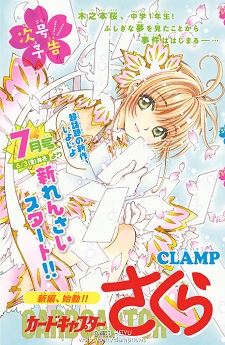 As part of the 20th anniversary to celebrate the Cardcaptor Sakura franchise, a new manga sequel series will be released by the creative members of CLAMP. According to the June issue of Nakayoshi magazine, the new series will take place after the protagonist Sakura has graduated from Tomoeda Elementary School as she sees a mysterious dream one day and will start on July issue, releasing June 3, 2016.

The original series was published for a period of four years from May 1996 to July 2000. The anime series is currently being rebroadcasted on NHK, which is also a part of 20th anniversary celebration.

-FS- said:
Is the new manga getting its own anime series?

First of all, because they should actually remake TRC first, since this pretty likely connects to TRC plotlines and Tsubasa has yet to have an adaptation.

Second of all, because it would be hard to market since the CCS "anime" and CCS manga are quite different beasts altogether.

Is the new manga getting its own anime series?

YAAAAAAAAAY!!!! ^_^
Man I am so happy! Hopefully it gets adapted into an anime

Good news for sure.

UGH... I can't wait for this. When I first heard of it I legit thought I was dreaming about it. Never would I have thought that CCS would ever get a sequel.

I watched Tsubasa Chronicle and although it's not exactly a sequel, it still stars two of CCS's main characters and though I didn't hate it, I wasn't overly impressed with the direction they went with it either. >_<

Aww my childhood is coming back... I feel kinda old for a teenager by seeing this.

Anyway, Clamp never change do they? I never watched Tsubasa Chronicle, but they're pretty much the same characters from Sakura right?

Ah well, I'll just wait for the anime adaptation. I really enjoyed seeing Sakura as a kid with my sister. Still remembering her struggle with cooking and her brother lol.

CCS has a perfect ending there's nothing left to be said there. Its up there with FLCL as "Series that can only be ruined by sequels"

XXXholic is not on hiatuses.... last chapter of it released less than month ago...

Its still a running series that is unfinished.
CCS is 100% finished.

CCS has a perfect ending there's nothing left to be said there. Its up there with FLCL as "Series that can only be ruined by sequels"
XXXholic is not on hiatuses.... last chapter of it released less than month ago...

harkan said:
Will they ever go back and finish X?

At this rate, never.

I'm so excited about this <3 *squeals*

Will they ever go back and finish X?

CCS has a perfect ending there's nothing left to be said there. Its up there with FLCL as "Series that can only be ruined by sequels"

It seems that CLAMP is uninterested to do something new these days, its a shame. On the other hand, this is great, Cardcaptor Sakura was such a amazing series.

X is next, please?

Cool. I'm looking forward to seeing how they continue the story.

Gooood news, I'm really curious how this will turn out

HikariJake said:
So many negative responses. Cash grab? Sorry, but that's how the world works.
It sure does. That's not a shield for criticism, though. But really, in my opinion, a sequel like this doesn't actually smell that much of a cash grab. TRC and the "tied universes" do.


HikariJake said:
It seems logical to me that they'd continue their arguably most successful franchise, especially considering how CLAMP hasn't been relative in years.
They have pumped out some newer stuff too, like Gate 7 and Drug & Drop. Don't know about the success of them though. However, it indicates unprofessional attitude with how they deal with their older works such as X. There's no excuse to keep the last chapters as a hostage. If they don't get anyone to publish it, they could easily release them digitally. They own it to their fans.

Let's hope this sequel have at least actual passion behind it, and doesn't connect with the TRC-clusterfuck. It might be actually good then!