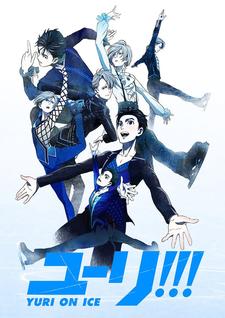 Avex Pictures has announced an original anime titled Yuri!!! on Ice at AnimeJapan 2016. An official website was opened on Tuesday.

Figure skating is a central theme of the series. The project, which has been planned for four years, is created by mangaka Mitsurou Kubo and director Sayo Yamamoto. According to Kubo, the two visited Barcelona, Russia, and Beijing for location hunts. Kubo has also created 900 pages of draft scripts in manga format.

PV looks nice and I'm digging that background music. But bishounen designed characters turn me off unless it's pure comedy. Then again if I dont give this a try, I would probably regret it.
so if this is just about ice skating, I'll watch. I just hope this isnt made of heavy drama,

The story
sees the title:Yuri on ice - its gonna be a harem story heh -_-
sees the poster: Are these males?
sees the pv - WTF
After watching Daeth parade- No this doesn't look gayish at all! Is this a reverse harem? Why aren't there any girls?
I thought it would be cool if Madhouse made an anime about figure skating...
sees the studio:Mappa...

No thanks,lol
I was expecting girls when I saw the tittle.

There's "yuri" in the title, this is gonna be....about dudes. Thanks for getting my hopes up :(

So much sports anime with boys! This is so wonderful! PV looks stunning, will definitely watch.

Thought of Yuzuru Hanyu when I watched the PV.

Aw man, I expected a GL anime. So much for that.

But still, it looks like it'll be an incredible show, I'm definitely looking forward to it.

I don't even know why I'm still trying to argue people on anime forums, people have always been like this.

wow, so many ppl getting butthurt for this. aside that, the trailer looks nice.

as a man, i don't see any problems with anime for females. in fact i enjoyed some of them and i love bishounen so much and prefers females from shoujo design instead of moe. i don't feels anything gays about it (unless it yaoi that we talked about).

sometimes fandom can bit greedy, especially when it comes to their favorites.

Never watched a figure skating anime. Hopefully this is good.

I don't even know why I'm still trying to argue people on anime forums, people have always been like this.

Gaelenmyr said:
Mayuka said:
>called : Yuri!!! on Ice
>give us a fujobait
skip

I love Japan so much right now

It's not even "yuri" but yuuri, and two of three characters are named Yuri/Yuuri (and Yuri is a very common name in Russian)

We don't know if target audience will be females, but I just love how a lot of guys cry about fanservice anime for female audience when there are shittons of romance/ecchi/harem stuff with more than enough fanservice. Double standards are real.

Since I'm not getting my yuri I'm renting the nearest rink and making this a thing.

And seriously the title's too perfect for it not be yuri.

talk about phenomenal false advertising with that title, I actually thought for a second they were bluntly saying it was a GL anime about figure skating

Funny everyone being butthurt and betrayed over something silly. Like they didn't say it was going to be an lesbian or all female cast when they first announced it on Crunchyroll news it was just stated as a project. lol so quickly they forget that Yuri is a common name in both Russia and Japan and not solely an anime genre.

Bait & switch, good one.
Cheerleading boys vs iceskating boys, not sure what to watch...
Staff looks awesome, Yamamoto + Miyamoto + Mappa + always quality when they spend time on research & location scouting.

tragedydesu said:
you think all boys are perverts? The only harem I liked was twgok because it have interesting characters and nice plot + it don't have a lot of Echhi.
My favorite anime is snk that anime don't have any ecchi or pervert scene
Double standards? Lol is normal for a guy to hate shoujo or those fujobait trash

I'm a girl and SnK is my favourite anime, but that doesn't mean I'm not a pervert :P
I don't think there's any correlation between any of these. Also, I have a few guy friends who like shoujo sweet stuff that I don't care about.

the title is a bit misleading but man, that looks really good.