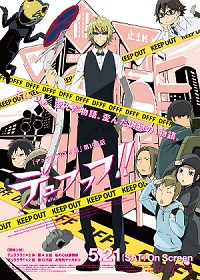 The official website of Durarara!!x2 Ketsu has revealed that a new special episode titled Dufufufu!! will be screened in select theaters in Japan on May 21, 2016. It is considered episode 19.5 of the Durarara!!x2 series.

Dufufufu!! adapts a chapter from the Durarara!! Gaiden!? light novel, which was released in 2014 to commemorate the 10th anniversary of the original Durarara!! light novels. It tells an incident involving a fake Shizuo from Numabukuro, Shizuo Nobusuma, who causes chaos in Ikebukuro.

Tickets for the theatrical screenings will be sold at AnimeJapan 2016 at the end of the month and on the Russia Sushi online shop by Aniplex+. The screenings will also include the previously released episode 4.5 and episode 13.5. Dufufufu!! will be included in the sixth Blu-ray and DVD volume of Durarara!!x2 Ketsu, which will go on sale on July 27.

Durarara!!x2 is the second anime series based on the light novels written by Ryohgo Narita and illustrated Suzuhito Yasuda. The third 12-episode part of the series is currently airing and will end on March 26.

Can't wait, especially since it focuses on my boy Shizuo.

LeaderTGW said:
Does "Durarara" actually stand for anything? acronym?
Nope, no acronym or meaning. In the afterword of the very first novel Narita talks about how his editor told him it was time to submit the novel with a title already. Narita just said Durarara because it was the first thing that came to mind. Then when asked if he would add an exclamation point like in Baccano! and Bow-Wow! he told him "Let's add two in there Bam-bam."

The editor accepted it.

Does "Durarara" actually stand for anything? acronym?

It's DRRR, what have I got to lose if I watch it??

Im just watching Drrr to see will Shizuo finally kill Izaya, so this will most likely skip my list.

This was expected since the other x2 series got an OVA each, so it's nice that there's another OVA for Durarara! Go Durarara Dufufufu!!

I see Shizuo in the center and I click that PTW button.

Cool, more DRRR! is awesome, definitely looking forward to it. I wonder if it will be as funny as the last one lol

Obligatory special episode in which the OP/ED is in one full sequence.

I don't know but that cover makes me re-think if i should watch it.