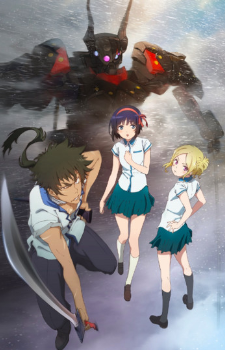 The main staff and cast of P.A. Works' 15th anniversary anime Kuromukuro, as well as a PV and visual (pictured right), were announced. The series is scheduled to premiere in 2016.

SecretDinosaur said:
I don't really like the character designs and I was a big fan of Nagi too lol

Buriki has the best character design touch in all of anime (says I) and should never be compared to standard stuff like this. (He's at least unique)

I love P.A and been wanting something like Hanasaku/Nagi/Uchouten Kazoku for awhile now.
Charlotte was ok. Glasslip was bad imo, so i hope it'll turn out good!

Characters look dumb. I've immediately lost all interest I had in this.

Ffs, mind putting in a redirect link to the anime -,-

Well this is certainly going to be interesting. Would've never expected P.A. Works to announce an action mecha. They're one of my favourite studios so I'm hoping they can keep their usual high production values and great characters.

Let me see how PA works deal with mecha CG is it gonna be a comet lucifer win, or just plain ol' suck

Otherwise this PV did exactly what Aldnoah Zero did, explosions and epic choirs, will this live up to what mecha has to offer these past years that was not by sunrise. We have set the bar pretty low I'm afraid.

yhunata said:
Seeing the visuals throw off my expectations. Probably because all 3 of them looks so damn out of place.
I got the same feeling. The Mecha scenes seems more like a pretext for the usual PA woks' moe than anything else there. Hope I'm wrong, but the pv didn't look good to me at all. The director however is good, so there's still hope.

Seeing the visuals throw off my expectations. Probably because all 3 of them looks so damn out of place.

When are we getting a DB page?

For those worried about the mecha/3DCGI deal, P.A.Works has been working with CGI for a while now, mostly with short commercials and promo videos, but we also had a glimpse of it in full scale with Tari Tari and Glasslip.
They're also expanding the company in new separated studios, one of which is dedicated solely for CGI development and animation.
I wouldn't expect nothing phenomenal right out of the blue, nor live 2D tech like Expelled from Paradise, but it's definitely worth checking it out. Also, they wouldn't risk fucking up the very own anniversary celebration series, so it's no terrible BUDGET CGI.

Director: Tensai Okamura (Nanatsu no Taizai)
Dude... stop fucking up with the credentials.
Okamura is a god of Memories from a Wolf's Rain that is Darker than Black.

JizzyHitler said:
lol what a pa works mecha? I am almost certain it'll be ugly CGI mechs but ill still give it a shot mainly cause i like that director
http://www.nicovideo.jp/watch/sm27840011
Did you see this? While I'm not the biggest mecha fan, I think the CGI mechs look pretty good so far. At least it quite nicely integrated and not super pop-out. According to my eyes anyways...

Though PA and mecha is really unusual combo.

Yeah, she is cute.

3D made it cheaper and easier. Also my paranoia wispers in the ear that Bandai probably has it's hand in everything.

bitch pls
You're right, all mecha girls are brutal veterans like Purus, Cham and Doris. No schoolgirls either, lol.

SoumaStuff said:
Anything P.A. Works is a yes.

well i'm still gonna watch it none the less lol

SoumaStuff said:
Anything P.A. Works is a yes.
Have you seen Glasslip and Charlotte?