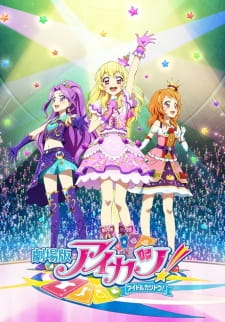 It was revealed at the end of the recently premiered Aikatsu! Music Award: Minna de Shou wo MoracchaimaShow! that a second Gekijouban Aikatsu movie is set to air in Summer 2016. An event held at the Shibuya Wald 9 theater by the staff at Toei regards the new movie as the second main movie for the idol anime franchise and stated there are no details about the movie yet apart from the release date.

The first Gekijouban Aikatsu movie premiered in Japan in December 2014.

Aikatsu anime franchise is based on an arcade card game about producing idols. A TV anime adaptation by Sunrise began airing in October 2012.

should watch aikatsu when i'm done with some backlogs :O

YES!!!
Aikatsu can keep going on forever, I would like that.

Akari reminds me of a mini Honoka from LoveLieve.

this series is on a roll too

I remember watching Aikatsu awhile ago. Maybe I should watch the movies soon...

Will definitely see it. The first movie was great.