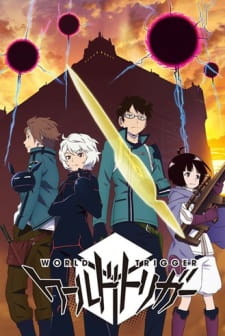 According to an announcement made at the recent World Trigger Summer Festival 2015, a new series related to the World Trigger franchise will premiere in October, following the end of the first TV anime adaptation. The new series is currently titled Isekai Kara no Toubousha (Fugitives From Another World), although it has yet to be confirmed that this will be the final decided title.

The information so far also revealed that it will be a brand new series with an original story not presented in the World Trigger manga, and with new characters and concepts. More information will be available at a future date.

World Trigger is a manga written and illustrated by Daisuke Ashiara. The manga has been serialized in Weekly Shonen Jump since February 2013. The TV anime adaptation by Toei Animation debuted on October 5, 2014 and is expected to run for 50 episodes.

Judging from the title "Fugitives from another world" I have 3 possibilities on what it's going to be about. My biggest guess is it's about Hatohara Mirai (former ninomiya squad sniper), Amatori Rinji (chika's older bro) and the 2 others that went through the gate to explore the neighbourhood (they are technically fugitives from Border since they went without permission and they're now in a new world(s) so it fits with the title). Another possibility is it's about a group of individuals from the 32 C class agents who were abducted in the Aftokrator invasion and somehow managed to escape and their story of trying to get home while getting stronger with neighbour triggers and greater risks due to no bail out etc. 3rd possibility which is most unlikely is it's about another group of individuals among the 400+ people who were captured in the 1st neighbour invasion and how they escaped and are now trying to survive these worlds and get home.

Jonesy974 said:
Lol, what I really love is that they announced this as a New Series/ Spinoff arc...it's literally in the title of this post. Yet for some reason MAL doesn't have it separated from the main 50 episode series.

But at the same time they split up every fucking show that's a split cour and list the second half as a 2nd season.

They announced as a "new series" just like other series announced their filler arcs as "new series". There was never an announcement of a Spin-off arc, that was a misconception.

There was no such thing as a split cour, it started right after the normal series, just like any filler arc.

Lol, what I really love is that they announced this as a New Series/ Spinoff arc...it's literally in the title of this post. Yet for some reason MAL doesn't have it separated from the main 50 episode series.

But at the same time they split up every fucking show that's a split cour and list the second half as a 2nd season.

Oh damn, thanks then. I put the series on hold because I didn't want to put up with the constant cliffhangers+slow pacing. Now I guess I have to wait longer to restart watching it.

Miragee said:
JohnCena said:
Miragee said:
What happened to this?
The original is still airing this one will probably start a wee or two after it finished

But MAL deleted the page for it.

It was never a different series, but a filler arc. MAL was waiting for official confirmation to merge both entries, confirmation they got in World Trigger anime official site, where the start of the "new series" is defined as episode 49 of the "main series".

It probably means that MAL's decided to merge the entries.

JohnCena said:
Miragee said:
What happened to this?
The original is still airing this one will probably start a wee or two after it finished

But MAL deleted the page for it.

Miragee said:
What happened to this?
The original is still airing this one will probably start a wee or two after it finished

What happened to this?

Im keen to check it out, i just hope that its done properly rather than the filler mind set.

How many more Arcs are there of manga material? if this has already caught up there must not be much material, don't want to imagine how long it will take for more to be made.

Wow what's with all the hate? Not even 1 episode released and barely anyone giving this a chance.
And why has no one mentioned Pile will be performing the Opening Theme? @_@
So far all we've been given is the title, which translates to "Fugitives from Another World"
So I'm guess it's going to focus on Neighbors who escaped the Neighborhood and seeking refuge in Mikado City. For all we know, these new characters might as well be part of Border.
Just by the title it seems quite interesting, I just hope they have a good amount of budget for this, and a change in Animator's group could be a good thing as well.

All I can say is please Toei don't fuck one my new favorites series up.

I don't understand people that complain about the pacing in WT. They've caught up to the manga at breakneck speed and without making any filler or time wasters beyond a little bit of recap. Any time I've felt like the pace is dragging, i Remember that 90% of the manga chapters are just talking heads, so that's honestly to be expected. They even cut out the OP for some reason, so a few minutes if recap is really not affecting the episode content much.

I actually think what they're doing is rather good, if this filler is being presented as a separate series from the main thing, honestly that's perfect; people that don't like filler can just skip it, and those of us that would like to see other characters and stories in the same universe can enjoy it for what it is without either side thinking it has any real impact on the main story.

In short, if you like WT, watch this and if it sucks, skip it.

Don't get why people are complaining about the pacing I thought it was fine lol. Anyway, not sure if I should be excited or worried about this.

I thought World Trigger pacing is too fast, I would like it a bit more drawn out.

I rather have filler then go a few seasons waiting for anime to continue. As long as the filler has an actual story and not random garbage.