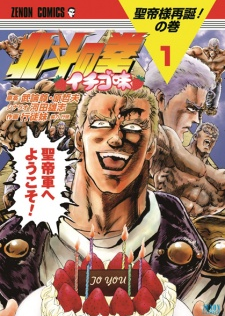 The fourth volume of spin-off gag manga Hokuto no Ken: Ichigo-Aji revealed that an anime adaptation has been green-lit. According to the wraparound jacket band found on the volume, the series also revealed that there are a million volumes currently in print. The television series is scheduled to premiere in Fall 2015.

The series is written by Yushi Kawata with illustrations by Imoto Yukito. It has been published online in Web Comic Zenyon since March 2013.

Synopsis
Serving as a spinoff gag manga of the original Hokuto no Ken series, the story is a parody of Fist of the North Star by Buronson and Tetsuo Hara. It consists of page-long gags centered mainly around Souther, both within his final battle with Kenshiro and inserting himself into other parts of the series where he doesn't belong. One recurring gag involves the kid with a turban repeatedly stabbing Souther in the leg every time he climbs the pyramid's staircase, and another involves Rei suddenly transforming into Souther in his iconic moments. (Source: Hokuto Wikia)

seems like this anime is still going strong. I'll make sure i'll check this out in the future if i ever i get to that point but for now i finally am going to start watching this, for years i've been wanting to get into this anime and now is the time to stop being lazy and to just start it off. EP 1! here i come :o

Mas0chist said:
I wish they would just remake the hokuto no ken series
there are already make trilogy movie for that

I need to watch fist of the north star. Haha. It would be bad to watch this before I do so.

I wish they would just remake the hokuto no ken series

Maybe I need to watch Hokuto no Ken.

Would I need prior knowledge of Hokuto no Ken to understand this?

I like both. The Jojo type and the fragile & tortured one (Kanekiiiiii). As long as the story is good bring it on !

About this one I never was a big fan of Hokuto no Ken, even if I really liked the movies remake of the original anime, but if it's entertaining I will watch it.

AWAY with short, edgy, bowl-cut faggots

It reminds me that I must start watching Hokuto no Ken.

I need to see this. DD Hokuto no Ken was pretty funny, I hope this will be too.

A parody anime for the most manliest anime of all time?Sure why not,it could be interesting.

Never heard of this manga before but eh, I guess it could be fun? Hoping to see some amusing "action" at least.