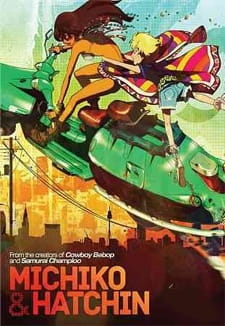 Michiko to Hatchin first aired on October 16, 2008 and received a dub release by FUNimation on September 17, 2013.

Synopsis
After escaping from prison, the sexy criminal Michiko rescues an abused girl known as Hatchin. The two are about as opposite as they come, but their fates become intertwined through the connection of a man from both their pasts. On the run from the police and Hatchin's abusive foster parents, the unlikely duo set out to find this man and ultimately discover their freedom. (Source: FUNimation)

Akame ga Kill! first aired on July 7, 2014, but does not have a dub release. It will be the first anime licensed by Sentai Filmworks to air on Toonami.

Synopsis
Under the rule of a tyrannical empire, Tatsumi, a young swordsman, leaves his home to save his poverty stricken village. He meets a girl named Akame, an assassin who was bought, brainwashed and trained to kill by the Empire. Akame is a member of the secret assassin group called "Night Raid" who use special weapons called Teigu. Together, Tatsumi and the members of Night Raid confront the corrupt empire. (Source: Crunchyroll)

Michiko is a great series.

AKG was a good watch for me... people appear to be getting upset over the ending...

i could understand that, but i wasn't mad at it...

True that akame ga kill was disappointing at the end since so many died but i believe that the point of this anime wasn't to pick favorites and have them somehow overcome all the odds with no casualties. This anime shows the true nature of corruption and how conflict can lead to losses on both sides.

Akame ga Kill! first aired on July 7, 2014, but does not have a dub release. It will be the first anime licensed by Sentai Filmworks to air on Toonami.

Heard only good things about Michiko to Hatchin, so I might give it a watch. Akame.....not exactly excited about. I would think they'd do Tokyo Ghoul before AgK.

I have a feeling im gonna cut cable soon though....is there a way to still watch toonami w.o it? I wanna show support not just watch online.

ziggy_Z said:
Dexthepleb said:
Why akame ga kill ;/
Because it's a good anime that is ideal for the Adult Swim demographic.
lol no

Michiko to Hatchin is awesome. Michiko is <3

This is gonna be the first anime on tv to air the subtitled version. Or tgey have kept the dub cast in house and will release the names the day after it airs.

Meh to Akame Ga Kill the ending just killed it for me.

I enjoyed Akame ga kill each week. It a pretty awesome show. The anime went orginal after episode 19 which wasnt to bad and the last ep sucked. Other then that its a kickass anime.

I asked Sentai while Akame ga Kill was still airing if they were gonna dub it, their reaction: "I would be surpised if it wasnt". So how big is the chance it will be a dubbed airing this summer? Pretty high i assume. I dont know alot about adult swim, I cant watch it here in Holland/Netherlands, however from what ive seen each anime they had was dubbed.

now i really feel like watching michiko to hatchin, i'll try catching it on toomami once it starts airing. akame ga kill never once caught my interest, and i don't think i'll be watching it anytime soon. still, it's intriguing how toonami is going to handle it, since it doesn't have a dub.

I stopped watching AkG around episode 7 and never got back to it (I was enjoying it for the most part though), so I might just watch it in English... granted Sentai does a good job with dubbing it.

Michiko and Hatchin looks good, I'll give it a shot.

lol AgK.. what a shitty piece of entertainment that was.

Bakuformer00 said:
heck I've heard some people saying they Want K-ON on the lineup,and I said really? I don't think a girly show should fit on a action block. It's better if Disney gets K-ON.
How is K-On a girly show? It's seinen.