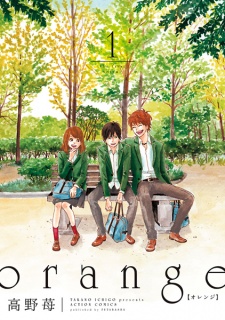 A scan of the upcoming issue of seinen magazine Monthly Action, to be released on April 25, revealed that Orange will be getting a live-action movie adaptation. The movie is set to premiere in December 2015.

Orange is written and illustrated by Ichigo Takano. It was first serialized in Shueisha's Bessatsu Margaret magazine in 2012. The manga went on hiatus for almost a year but later moved and resumed serialization in Futabasha's Monthly Action magazine. The fourth volume, which was released on February 20, ranked 21st in Oricon's weekly manga rankings chart. Crunchyroll is also publishing the manga in English online.

Synopsis
One day, Naho Takamiya receives a letter written to herself from ten years in the future. As Naho reads on, the letter recites the exact events of the day, including the transfer of a new student into her class named Kakeru Naruse.

The Naho from ten years later repeatedly states that she has many regrets, and she wants to fix these by making sure the Naho from the past can make the right decisions—especially regarding Kakeru. What's more shocking is that she discovers that ten years later, Kakeru will no longer be with them. The future Naho asks her to watch over him closely. (Source: Day of the River)

Nice. I am expecting for Orange to have an anime adaptation but a live action is still okay. :D

Uh can we at least make decent headway on a manga before adaptations...?

Shuhan said:
17 chapters in 3 years? What is this a tri monthly manga?
Hiatus.

That's nice! I hope it gets an anime adaptation though..

I remember crying hard after reading the manga. Would've been better if it was an anime adaptation instead. *sigh*

actually i'm really waiting for anime adaptation, but live action is way to go too.. gonna give it a try

I was kind of hoping for an animation. I'm not very keen on live action movies.

Damn. Like most, I got excited when I saw..

In the thread title.

Too bad as, while reading, I thought this would for sure get an anime adaption at some point.

I wish it was an anime adaptation, seems pretty cool

It would have been better if it was an anime adaptation lol :D but will definitely watch this when this live action air.

Stark700 said:
So this and Chihayafuru got live adaptations recently. Oh well, there's hope for an anime someday.

I've heard only good things about this series. Waiting on an anime adaptation, which I expect once it ends.

The synopsis always interested me. I hope this will get an anime adaptation someday.

CloudStrifeFFVII said:
Just curious, why a Live action before an anime adaptation?
I'm wondering the same thing.
But, I'm a bit excited. I love this manga.