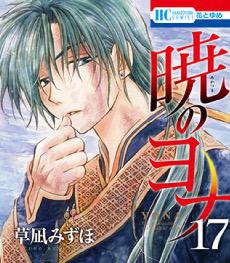 The wraparound jacket of manga Akatsuki no Yona's 17th volume announced that an OVA will be bundled with an upcoming volume of the manga. Volume 16 was released on December 19, 2014 and ranked 15th in its first week on Oricon's weekly manga ranking.

Written by Mizuho Kusanagi, the fantasy shoujo manga has been serialized in Hakusensha's shoujo manga magazine Hana to Yume since 2009. A TV anime adaptation of the series premiered in Fall 2014 and will complete at 24 episodes on Tuesday, March 24.

Akatsuki no Yona OVA on MAL

Awesome news for an awesome series. Praying that a second season will come soon!

Great! I wish also for a sequel the manga is getting better and better :)

Stark700 said:
an OVA will be bundled with an upcoming volume of the manga.
Volume 19


I think that I know what this OVA will be on.
Kija's "love" scale.

YES I'll take any Yona that I can get. But fingers crossed for a new season announcement!!

More Yona is great in my book.

Also, if you don't like this show or the manga, then...

I think that I know what this OVA will be on.
Kija's "love" scale.

so hype for More of Akatsuki no Yona :)
now all i need is a 2nd season announcement.

Tengai said:
I thought this Anime adaption was bad.
How bad on a scale of 1-10

Awesome, but I want a second season, it turned out to be such a good story and Yona got such a good development!

Nice, one of the realest shows Pierrot did in a while.

YES!! Now, they just need a 2nd season announcement to the next week (please kami-sama).

I hope there will also be a second season.

This is great and all, but oh man, a second season of Yona would be a blessing.

I thought this Anime adaption was bad.

Now, all we have to do is to wait for a second season to see more awesome arcs and more Zeno.