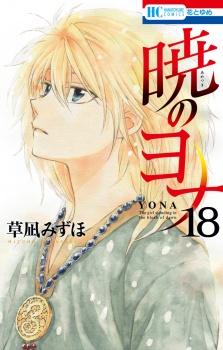 Hakusensha has opened pre-orders for the 21st and 22nd volumes of the shoujo fantasy manga Akatsuki no Yona, both containing new OVA episodes which will adapt the story of the 18th volume about Zeno.

Akatsuki no Yona was previously adapted into a 24-episode TV anime in 2014. An OVA episode was also released with the manga's 19th volume. Kazuhiro Yoneda returns to direct the new OVAs at Studio Pierrot, with the cast members also returning.

Please give us a Season 2!

Awesome!
Now all I need now is that season 2 :D

Zeno's backstory is awesome and all but why not show it in the second season?? I mean there has to be a season or hell will break lose. My bestfriend adore this anime so much that she is always asking me if there is a news regarding the second season.

Hopefully we get season 2 as well man..

They are adapting Zeno's arc so does that mean they won't make season 2? Well, at least they won't need to censor it (if there something to be censored, I don't remember) It's somehow similar to the ovas of Kamisama then

NOOOO!! Adapting this arc totally makes it seem like there's no S2. This is quite the important story in the main story D: Why would they adapt it now. I want S2!!!

ziggy_Z said:
Wait, if this OVA is adapting an actual volume and not a side-story, does that mean the anime won't be coming back? If so, that's a straight-up crime.

That being said, yay! Can't wait.
This OVA might just be a sign of a potential S2 aswell :>

thebrentinator24 said:
I'd much rather prefer a 2nd season, but I suppose this is better than nothing.
sums it up pretty much

Great news, whatever it's about I can't wait to watch them. I'm sure they're gonna be about Zeno anyway.

Great!! I'm really excited fotr this, but honestly I would prefer a second season... Hopefully it will have one in the future

It's a dream come true for me. I wanted Zeno's backstory to be animated some day and thank you Pierrot.

Hopefully we'll get an actual S2 after or Jaeha's backstory OVA

I am happy and sad at the same time because this really feels like there will be no season 2 :/
but I loved Zeno´s backstory in the manga so I´m looking forward how it will be adapted.
But I still have some hope because in August vol1 in english will be published, so maybe, if the sales go well?

Good news. Hopefully we get season 2 as well.