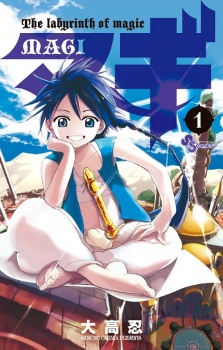 The winners for 2013's Shougakukan Manga Awards in each category are as follows:

Shounen
Magi: The Labyrinth of Magic by Shinobu Ohtaka

Shounen: Magi: The Labyrinth of Magic

good for you magi

Children in Japan reading Zekkyou Gakkyuu a horror Manga??? That is so fucking awesome ahahaha.
I added Zekkyou Gakkyuu on my plan to read list.
Anyway, congratulations to all of them!!!

Yay for Magi! Never heard of others.

Red_Keys said:
Is there not a category for Josei?
There is no separate category. The Kodansha Awards do not have a separate josei category either. Josei sometimes win the shoujo category. Ooku won the shoujo category in 2010, 7 Seed in 2006. There technically is not a seinen category. It's actually called "general category", and treated as the grand prize. It's very rare for anything but seinen to win. Kids on the Slope, a josei, won the general category in 2011.

I haven't read the Shoujo one. Not a big fan of the writer/artist but I'll give it a shot.

Zhou said:
Personally, I don't care about any awards given by publishers.
this award covers all manga not just stuff publised by them

tsubasalover said:
Seinen: Mogura no Uta
Rated by 0 MAL members.
Well, I hope the manga will get more activity from this announcement.

MAGI YEEEESSSS I LOVE THAT MANGA IM SO HAPPY

I didn't know children are the target group of Zekkyou Gakkyuu.

There are better choices out there, imo... but congratulations to all of them.

Personally, I don't care about any awards given by publishers.