Story:
On a hot day in the summer, Keita finds a mysterious watch. From then on, he becomes able to see Youkai spirits. 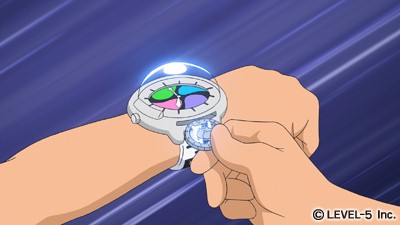 ....meh
nakayasumi said:
What in the world is this suppose to be?

It's a yokai medal. How can you not know this? :P


By the way, here is a trailer. Looks horrible for me ... I will probably watch it anyway - just because of Inazuma Eleven though.

I'm in my twenties and I'm so gonna watch this.

Hey but at least it dosen't show breasts for 25 minutes.

Why cant it be Layton or Dark Cloud related

No thanks it doesn't look that interesting to me.

I'll pass on this one unless my curiosity gets the best of me one day.

Kazeshini said:
It's not digimon without a headband
I think you mean goggles.

It's not digimon without a headband

Pfffff Way too epic so no. I think it's childish, but oh well.

You mean, the guys who made the Professor Layton series?

Yeah seems a biiit too childish for me. Good anime to watch with any younger siblings if you have em but other then that Iunno.

Zeream said:
Lol kids anime. Its all the same no matter which one you watch.

The only kids show that's good is Precure and even then it's not exactly just for kids, most seasons have something to keep dad interested too.

Lol kids anime. Its all the same no matter which one you watch.

Too silly for my tastes.

was interested until i saw the graphic and also if only the watch part was able to make him freeze time.