Hide AdsLoginSign Up
Send us your hidden gems of 2022 for "You Should Read this Manga!"  ( •̀ᴗ•́ ) ♡
Forum Settings
Forums
Top
>
Forum
>
News Discussion
>
ONA 'Knights of the Zodiac: Sa...
RecentWatchedIgnoredSearch Forum 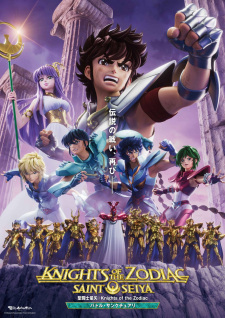 Streaming service Crunchyroll revealed at Comic Con Experience 2022 a third season for the Knights of the Zodiac: Saint Seiya original net anime on Thursday. Crunchyroll will stream the anime on their platform.

Produced by Toei Animation, the first season streamed in two six-episode parts worldwide on Netflix in July 2019 and January 2020, respectively. The second season, subtitled Battle for Sanctuary, premiered on July 31 on Crunchyroll.

The anime series is based on Masami Kurumada's action adventure manga, which was serialized in Weekly Shounen Jump from December 1985 to November 1990.

Synopsis
Time is running out! Only five hours remain before the god-killer arrow lodged in Athena’s chest will kill the goddess. The powerful Grand Master is the only one who can save her life, but to even reach the Grand Master’s chambers, Seiya and his fellow Bronze Knights must ascend Sanctuary and pass through all Twelve Houses, each temple guarded by a Gold Knight. Not everyone will complete the journey and reach the summit of Sanctuary where a shocking surprise awaits. (Source: Crunchyroll)

Offline
Aug 2016
3099
Even the recent live action trailer looks comfier than these CGI OVAs nobody asked for.
#3
Memores

Offline
Feb 2021
4182
MichaelJackson said:
Even the recent live action trailer looks comfier than these CGI OVAs nobody asked for.
I agree. It looks awful. Why not make traditional animation?
MemoresDec 3, 2022 5:46 AM
#4
deg
Offline
Jan 2009
82813
even if i scored it low im still enjoying the story of this show so im glad they are making more seasons of it

Offline
Feb 2014
7171
Nice, been waiting for this announcement, it was kinda a given since the last episode wasn't quite a season finale and just ends there like nothing.
They should at least cover all of Santuary arc, as is the best artc of Saint seiya.
#6
InfiniteGaia

Offline
Oct 2013
16
Well fuck. Guess people will watch whatever garbage is shoved in front of them as long as it is readily available on a streaming platform. Beyond trash.
#7
tchitchouan

Offline
May 2019
2319
another year another subpar saint seiya let down.
#8
Hoppy

Offline
Nov 2008
27530
Dear god, my eyes. Also CR did not learn from Ex-Arm, the CG is of abysmal quality and in an era where good 3DCG does exist.
#9
deg
Offline
Jan 2009
82813
people are forgetting that anime is usually planned for a long time before its season 1 airs so its highly possible that this is at least planned to do all the sanctuary arc of Saint Seiya so it got nothing to do with it being watch enough by fans because here on MAL alone its not that popular show to begin with
#10
silversaint

Offline
Feb 2021
4182
InfiniteGaia said:
Well fuck. Guess people will watch whatever garbage is shoved in front of them as long as it is readily available on a streaming platform. Beyond trash.
Indeed, you are absolutely right.
#12
malvarez1

Heck, it might do it faster than Sailor Moon Crystal.

Offline
Jan 2016
412
InfiniteGaia said:
Well fuck. Guess people will watch whatever garbage is shoved in front of them as long as it is readily available on a streaming platform. Beyond trash.
thats true, but its not like people wanted this to happen. Crunchyroll has a bad habit of just throwing money to animated projects no one asked for and many times they turn out to be crap.
#14
Bardock08642
Offline
Apr 2020
1
Who asked for this terrible adaptation? , everyone wants the 2d, always have to use cgi...
#15
malvarez1

Offline
Aug 2010
2382
Yikes, so much negativity.
See All Discussions