We all enjoy looking up at the night sky, and watching the stars. And quite often we wonder what exactly is going on...out there in deep space. Fortunately, there's a ton of excellent space anime which will clue us in and make our imaginations run wild!

Space has always fascinated mankind. Ancient rock paintings, mythologies and religious texts from various parts of the world are filled with references to the planets and stars that inhabit the cosmos.

The good news is that anime does 'space' pretty good. In fact, some of the most highly-rated and successful anime tend to be space-themed. That's not difficult to understand when notable franchises such as Mobile Suit Gundam, Macross and Legend of the Galactic Heroes have played a key role in popularizing the genre.

Check out what the genre has to offer in our space anime list down below!

One Small Step for Man, One Giant Leap for Space Anime! 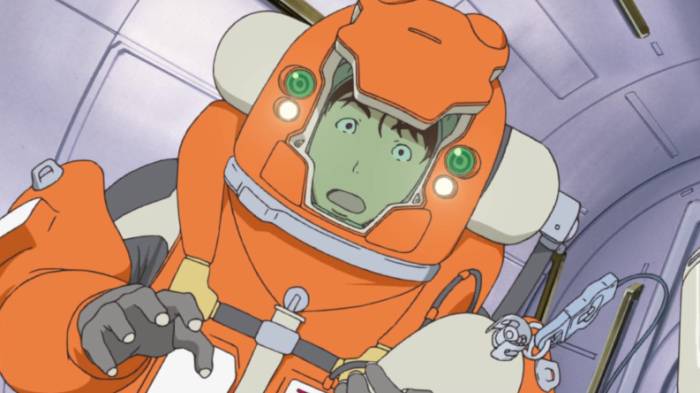 Makoto Yukimura’s excellent Planetes manga brought us a thought-provoking space tale. So how does the anime adaptation hold-up? Pretty well - fans of the manga won’t be disappointed, although there are some differences in how the main character, Hachirota Hoshino’s story is told. Nevertheless, watching this everyman reach for the stars to pursue his dreams is inspiring stuff! 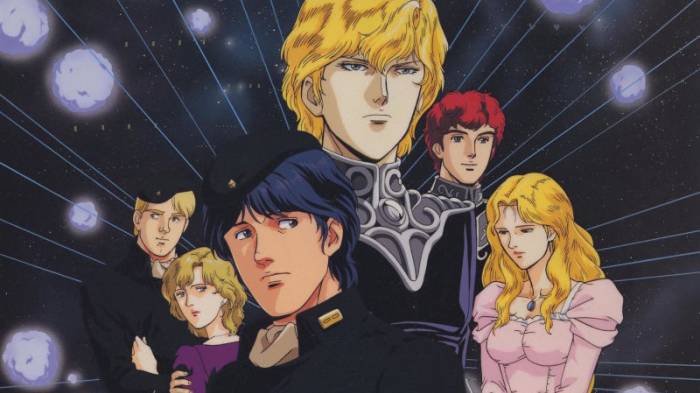 Ginga Eiyuu Densetsu is a polarizing anime. Some fans believe it’s the best thing since sliced bread, and anime’s answer to the seminal Star Wars franchise. On the other hand, there are those that reckon it’s overrated.

Well, I respect both opinions but I definitely put myself in the former camp. Ginga Eiyuu Densetsu is a deep, dense and sophisticated space anime which requires one to become totally invested in its lore in order to appreciate it. 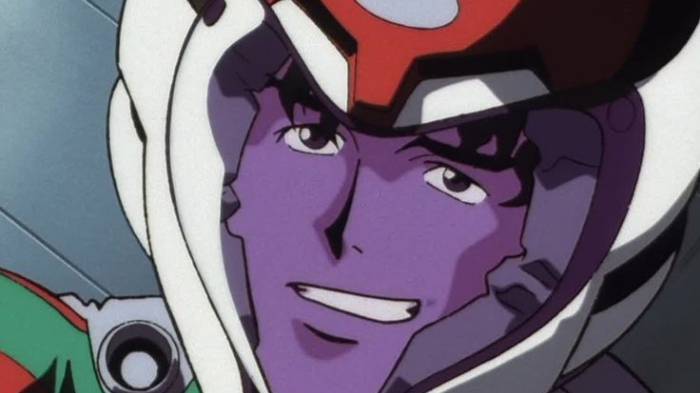 Shinichirou Watanabe’s brilliant Cowboy Bebop is the kind of anime that even normies can enjoy, and start developing a fondness for space anime. It’s a pastiche that cleverly borrows and fuses elements from westerns, space operas and even kung-fu movies.

Watching Spike Spiegel and his ragtag crew kick butt around space, and on the various planets that they visit is an incredibly entertaining experience. 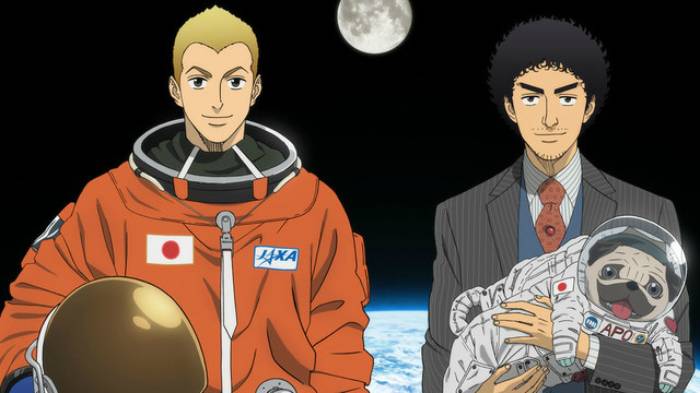 UFO sightings seem to be becoming common place, and a large chunk of the world population believes that we’re probably not the only intelligent lifeform in the universe. So, it’s not surprising that an anime would explore the phenomenon of UFOs in a humorous and heart-warming manner.

Space Brothers is a tale about two brothers, Mutta and Hibito Namba as they deal with life’s ups and downs as they pursue their dream of becoming astronauts. 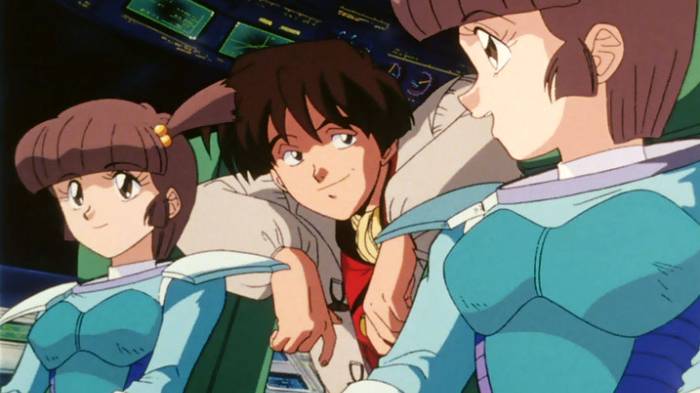 Justy Ueki Tylor is a through and through slacker. He’s the kind of guy who wants to cruise through life without working hard and exercising any form of responsibility. But things don’t quite turn out as he was hoping, and is soon thrust into the position of Lieutenant Commander and Captain of Soyokaze after saving an admiral through sheer blind luck!

So what’s an irresponsible dude left to do? I guess, he can just live it up so we can enjoy one of the funniest space anime in the known universe. 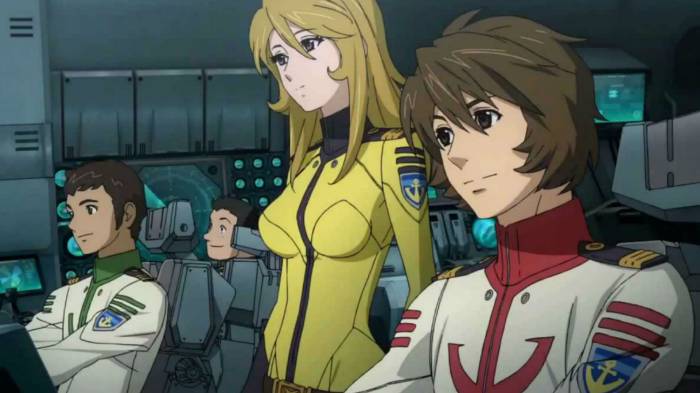 Let’s be honest, earthlings facing off against ruthless aliens has been done to death in anime and Hollywood movies. But regardless of how many times we’ve come across this type of scenario, we’re always up for another space anime if it’s well-executed.

Star Blazers 2199 raises the tempo and gets our blood pumping as we root for the crew inside the seminal Space Battleship Yamato. This is a modern update to an old school classic...done right! 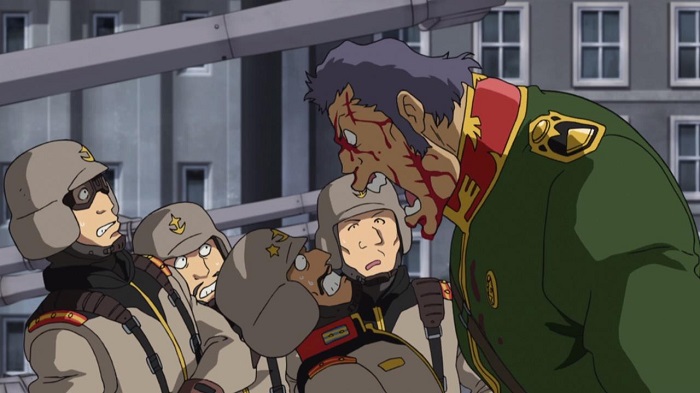 We can’t talk about anime in general without mentioning the epic Gundam series. In fact, this series is so vast that it’s difficult for newcomers to figure out where they should start. The first Mobile Suit Gundam TV series should be the ideal place, but it’s fairly dated and may put off viewers who’re accustomed to modern anime. No problem then; Mobile Suit Gundam Origin is a retelling of the series with a slick updated look. 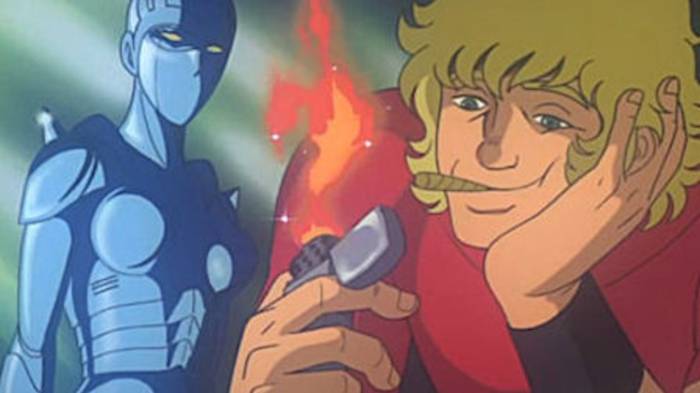 Let’s get something important out of the way – Space Adventure Cobra is cheesy as hell! Fortunately, it’s the good kind of cheese that will put a smile on your face.

Cobra is a space pirate who wears a campy-looking tight red bodysuit and sports a Psychogun which is embedded in his left arm. He has a penchant for cigars and beautiful interstellar women. But his android sidekick, Lady Armaroid is the voice of reason when things get a little wild. 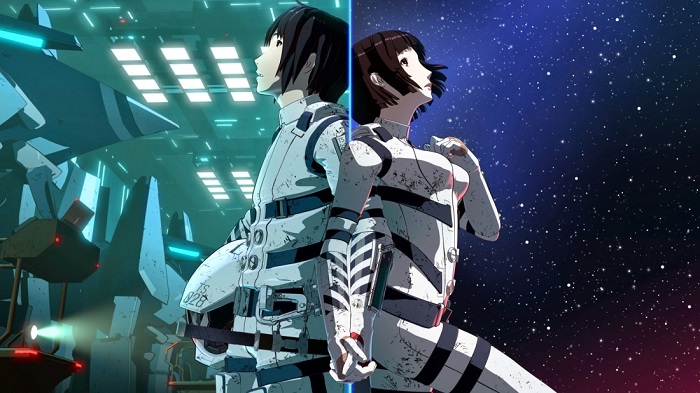 Tsutomu Nihei of Blame! and Biomega fame also went on to pen the Knights of Sidonia manga. And boy is it ever infused with that stark and techno-fetishistic fervor that this particular author is famous for!

So does Knights of Sidonia manage to escape the cyberpunk ghetto and embrace the tropes and traits of space anime? Yes and no. It’s a space anime all right, but still drags along that nightmarish vibe that’s a mainstay of Nihei’s earlier works.

Macross: Do You Remember Love? 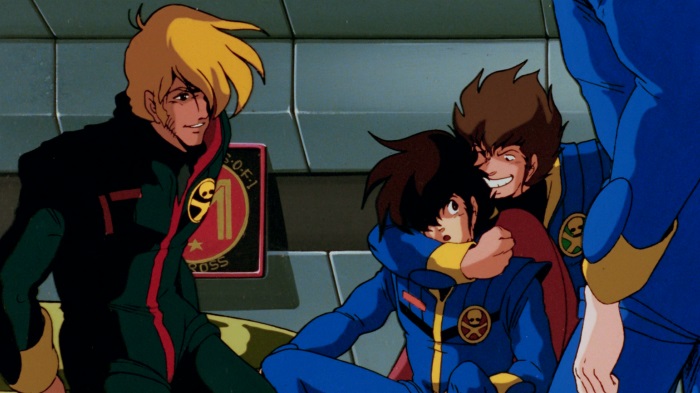 Macross: Do You Remember Love? is an absolute masterpiece and a definite must-see theatrical release for anime fans.

The story, characters and themes are timeless. There’s a bittersweet love-triangle between Rick Hunter, Lisa Hayes and Linn Minmei. And an awesome 80’s pop soundtrack that may help to bring peace between humans and the Zentradi, which will get your head nodding. 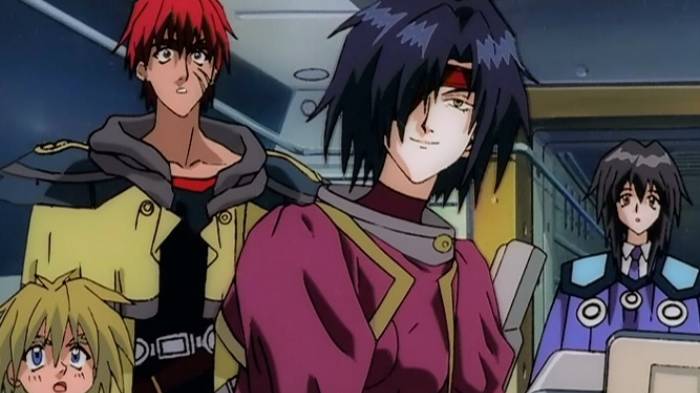 Outlaw Star shares a lot of similarities with Cowboy Bebop. Both were produced by Sunrise and released in 1998, and both are space anime with an oddball cast of key characters and villains. Yes, Cowboy Bebop is the better of the two but Outlaw Star boasts similarly high production values, and is just a tad wackier! 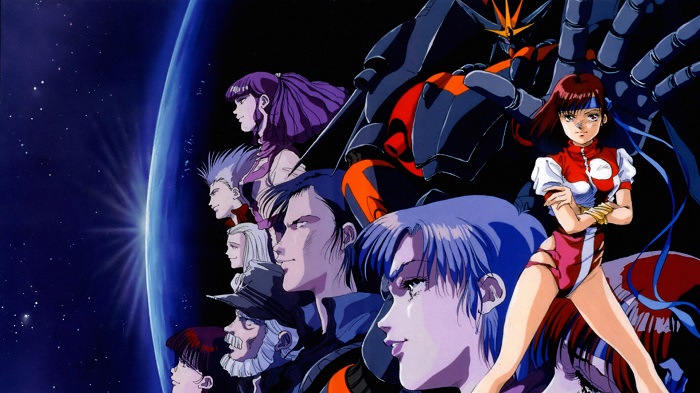 Hideaki Anno is a brilliant director who’s always pushed the envelope, creating some of the most innovative and captivating anime ever!

Top wo Nerae! Gunbuster is his foray into space, where his out of the box thinking is on full display. On the surface, Gunbuster’s simple earthlings-versus-space-monsters plot doesn’t sound too enticing. However, it’s the dynamic character interactions and well-conveyed science fiction elements which are pure win.

Seikai no Senki II (Banner of the Stars II) 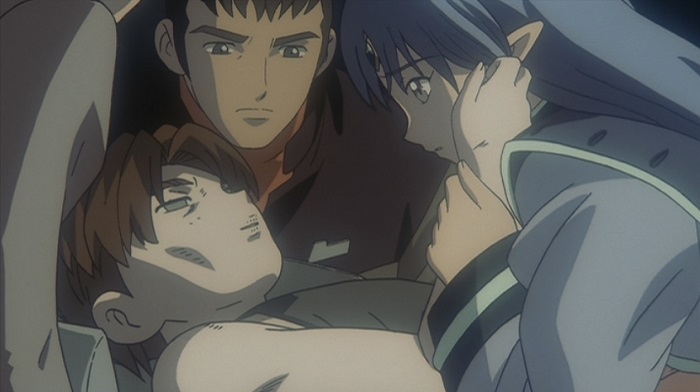 Most space anime tend to focus on concepts such as space travel, battle skirmishes with alien beings or the political shenanigans of galactic federations. That’s why Seikai no Senki II is a breath of fresh air, with its unique take on how the sexes relate to each other on a prison planet. And as one would expect, things get rather complicated! Royal Space Force: The Wings of Honneamise is criminally underrated. The richly-detailed world, silky-smooth animation and inspirational story should earn it a special place in every anime fan's heart! Plus, as one of the legendary studio Gainax's first animations, it has a place in anime history. 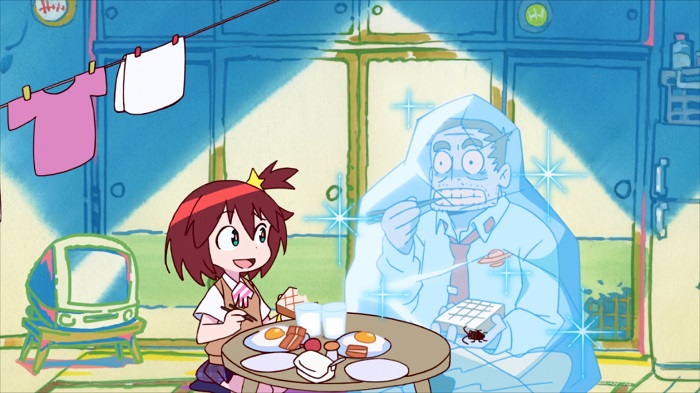 A frenetic, unhinged universe where a mishmash of Trigger's various series co-exist and a middle school girl called Luluco must navigate through all the madness. Check it out, each episode is only 7 mins a piece - what have you got to lose? 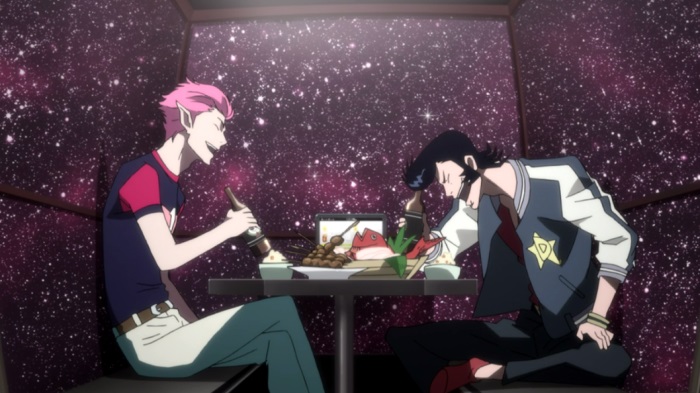 When a show is produced by the same folks that made Cowboy Bebop, then it’s bound to be good. The first season of Space Dandy was awesome, and the 2nd season doesn’t disappoint one bit. It still retains the trippy style, humor and Taoist elements which help it stand apart from other space anime.

Dandy is still a riot, but will he ever grow up?! Perhaps it’s better that he doesn’t.

Hey, you haven't even come close to exploring the furthest and dankest frontiers of space anime. There are a few more interstellar shows that await you at the edge of the cosmos! 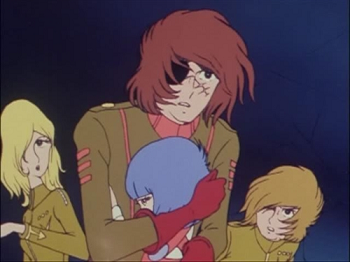 The late Leiji Matsumoto produced many notable works with space and sci-fi themes. And Space Pirate Captain Harlock is one of his more famous works. The voyages of this enigmatic space pirate have captured the imagination, and gone on to inspire the French electronic duo – Daft Punk – who later worked with Matsumoto on Interstella5555: The 5tory of The 5ecret 5tar 5ystem. 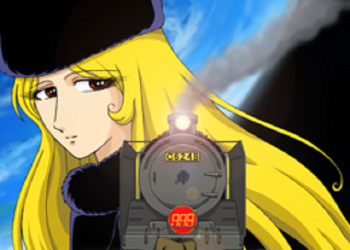 Galaxy Express 999 is a somber and melancholic space drama. It's certainly less about delivering pure entertainment, and more of a cerebral experience.

Tetsurou's journey across the galaxy on a space train together with Maetel will take your breath away! 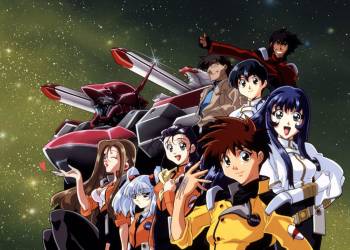 If you're looking for a space anime that doesn't take itself too seriously, then Nadesico may be exactly what you're looking for. It's chock-full of humor or parody, that will have you in stitches. And it also sports some cool mechanical designs which will make you feel kinda nostalgic for the 90's.