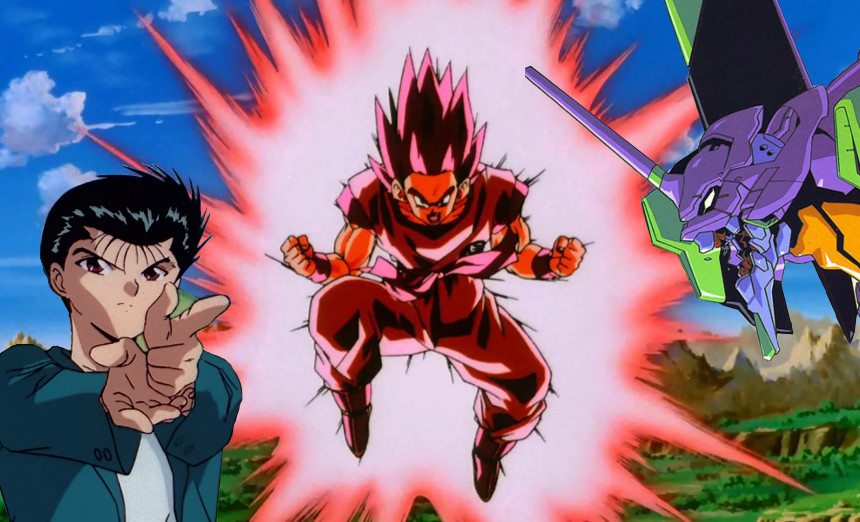 Sentimental for the halcyon days of beautifully hand-drawn cels in anime? How about for the hit-and-miss English dubs, and occasionally choppy animation? It was a mixed bag when it came to 90s anime but there's no doubting that the intriguing writing and genre-pioneering story lines built the foundations for the myriad of shows we enjoy today.

Let's take a trip down memory lane with this list of 20 anime from the 90s, the beloved titles that drove the 90s anime engine. 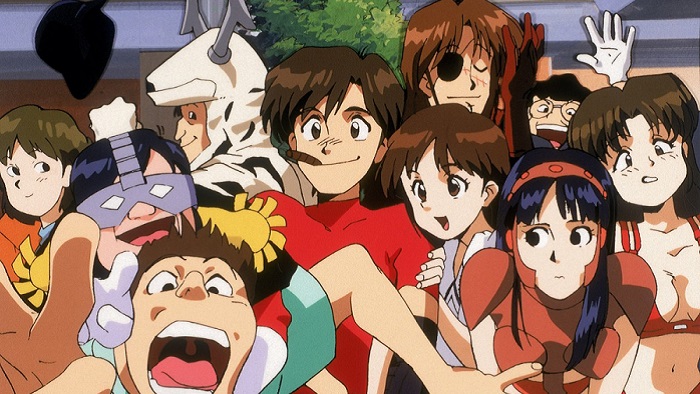 Before there was Genshiken, before there was Welcome to the NHK, fans were rewarded for their fandom with Otaku no Video, a two-part OVA loosely based on the creation of Studio Gainax. The show itself is an important contribution to the culture, as it's among one of the earliest to give a closer look at the otaku lifestyle, while having a lot of fun with it too! 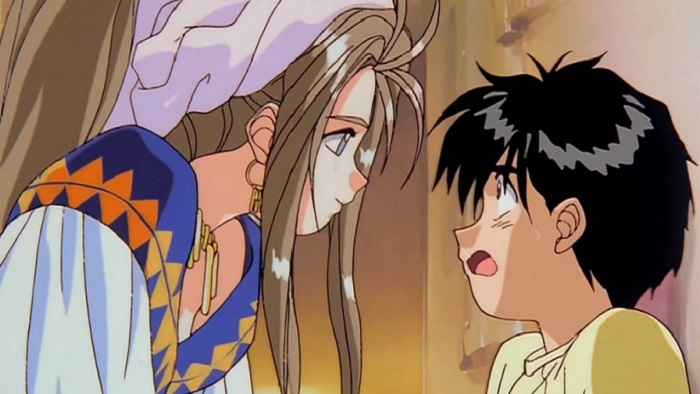 This five-part OVA that predates the 2005 TV series introduced us to the goddess Belldandy, and her sisters Urd and Skuld. They shack up with college student Keiichi Morisato in an old shrine after he gets kicked out of his dorm. As an entry in the "magical girlfriend" genre, its sense of sweet romance garners it a spot on this list of 90s amine.

The harem in this anime from the 90s is most memorable for being comprised of a cast of extraterrestrial characters. And there's a good reason they're competing: Tenchi Masaki is royalty after all. 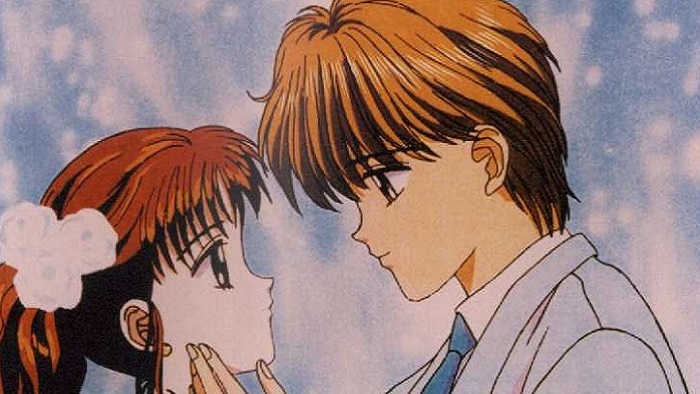 The rom-com premise of Miki and Yuu is one of boy-meets-girl-via-their-two-sets-of-divorcee-parents-conveniently-switching-partners. Talk about getting off on the wrong foot! 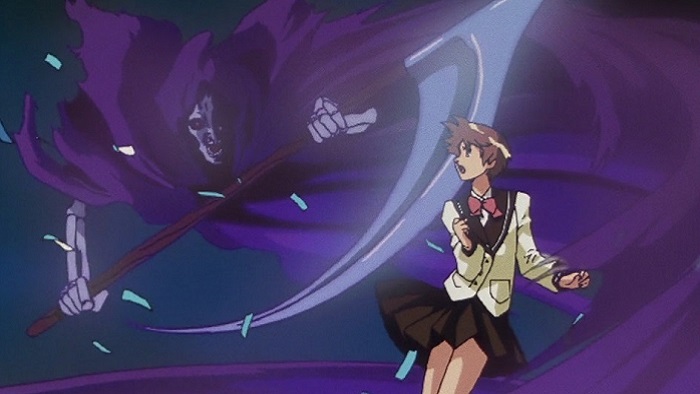 With the music of Yoko Kanno, this mishmash of fantasy, mechs, romance, and adventure counts itself among the more unique titles of anime in the 90s. Anyone looking for a good old fashioned story of a young heroine getting transported to a magical world will more than enjoy this classic. 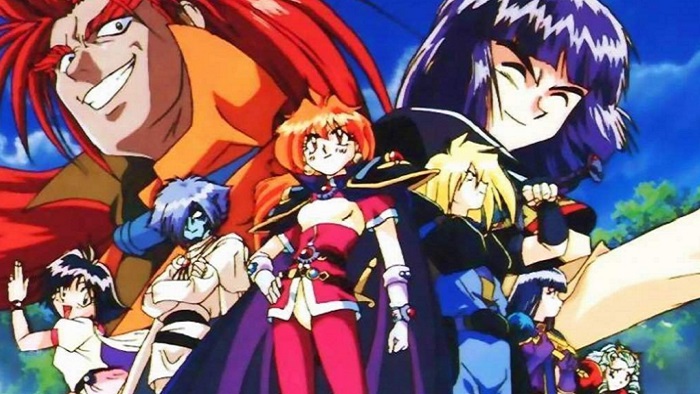 Imagine your D&D campaigns were turned into a medieval adventure anime, and you've got this nostalgic treat. Evil dragons and dastardly bandits are aplenty in this fantastical world, while shiny (and sometimes) magical treasure is the reward. Lina Inverse is a powerful mage not to be trifled with, leading the charge in this boisterous and action packed adventure anime. 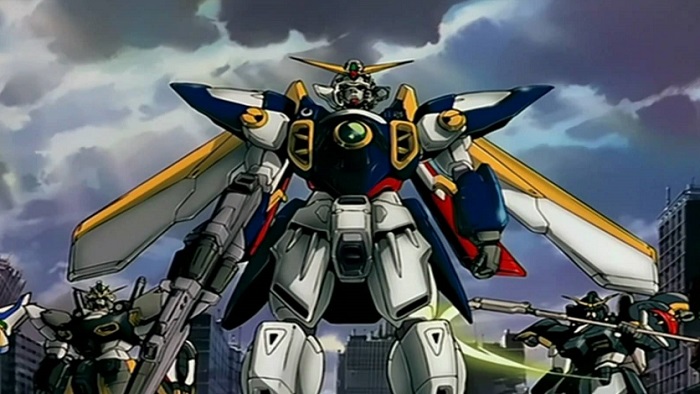 This mech franchise has been going strong for over a decade, with plenty of adaptations and spin-offs that all started with the release of its first title, Mobile Suit Gundam. When it was released in the 90s, Wing could be credited with being among those titles (along with SEED) that helped spread the popularity of anime to the West.

Telling the story of five pilots fighting for peace and independence for the off-Earth colonies with their mechanized 'mobile suits', it's a standout title on this list of anime from the 90s. 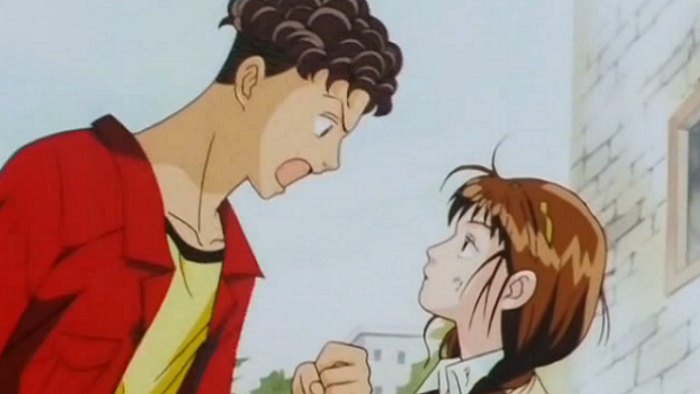 After student Makino Tsukushi defends a friend against the four richest and most popular men at her high school—known by their fans as the “F4” (“F” is for fabulous!)—she finds herself at odds with the princely quartet. Making matters worse is when she starts to fall for one of them. 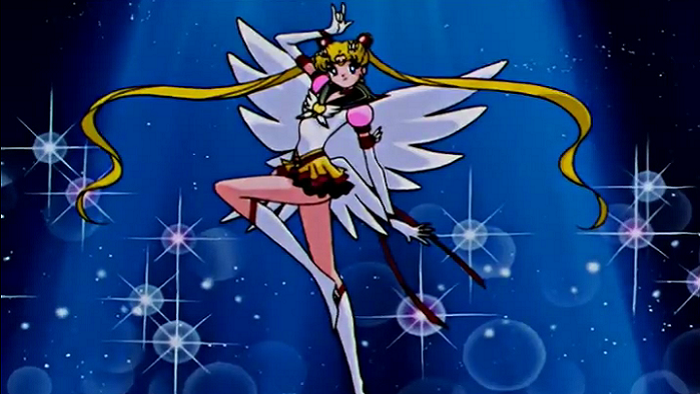 It's without a doubt that the Sailor Moon franchise is another part of what defined the 90s for anime. It was also a driving force behind the popularity of the “magical girl” genre.

Usagi Tsukino stars as the eponymous Sailor Moon, princess of the Moon Kingdom and future queen of Crystal Tokyo. The series follows Sailor Moon and her fellow Sailor Soldiers' struggles against an assortment of villains.

Here in its final season, Usagi evolves into her final form, Eternal Sailor Moon, and the Sailor Scouts combine forces with another team of Sailors known as the “Sailor Starlights”. This time they face off against their strongest enemy yet, the corrupted Sailor Galaxia, in a final battle that would determine the ultimate fate of the Scouts, and the Universe itself. 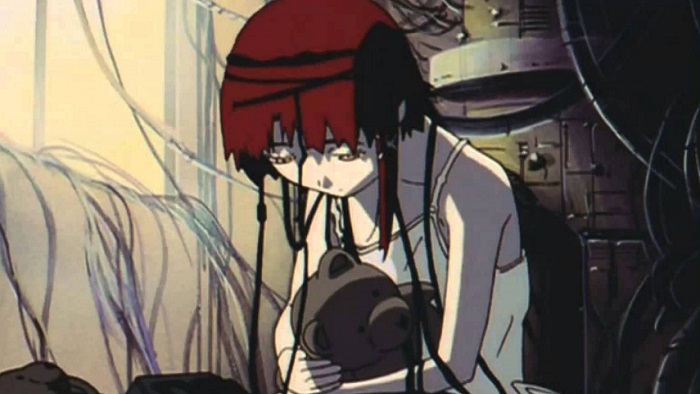 This intelligent cyberpunk thriller doesn't revolve around corporate conspiracies or sexy cyborgs in hard suits - just a young girl who finds the lines of reality blurred when she discovers "the Wired". The deeply philosophical story immersed her, and its viewers, in an other-worldly, sentient global communication network - almost like the internet we know today. 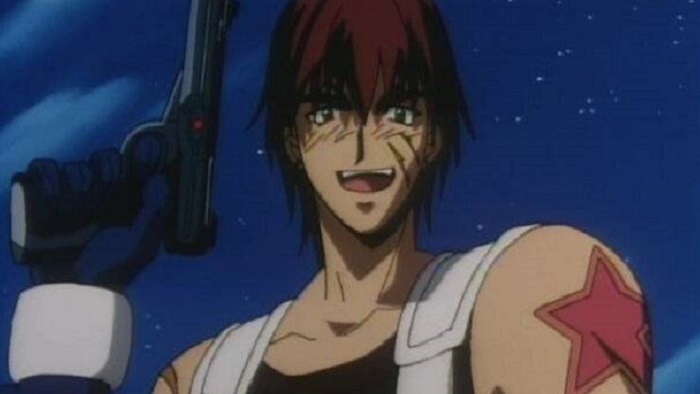 This galaxy-hopping adventure features a ragtag space crew on the eponymous ship, Outlaw Star, helmed by feisty outlaw Gene Starwind. It's an action-packed intergalactic treasure hunt for a universal holy grail known as “the galactic leyline”. It also features one of the coolest guns in the universe, Gene’s caster gun. 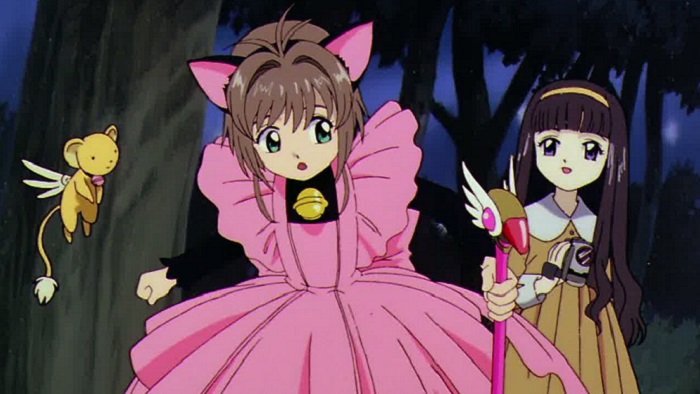 Of all the CLAMP works that were adapted into anime in the 90s, probably the best known was this magical girl entry about Sakura Kinomoto.

After accidentally releasing the powerful Clow Cards from the book that imprisoned their power, Sakura is given the task of recapturing them all. With its own unique (and popular) take on the magical girl genre, it deserves a place on this list of 20 anime from the 90s. 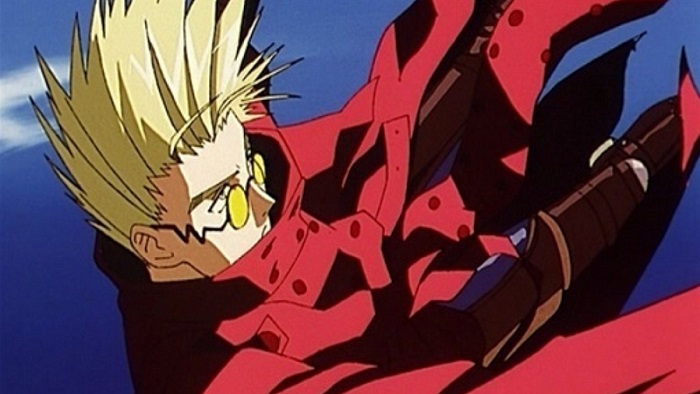 Set on the distant planet of Gunsmoke, with a setting inspired by American Westerns, this freewheeling anime romp is helmed by one of the goofiest screwball protagonists ever. In spite of this, Trigun is not without its measure of depth and pathos.

Vash the Stampede is a hero worthy of admiration, if only because despite the tragedy of his past, he hasn’t managed to lose his warped sense of humor nor his steadfast belief in never taking another's life. 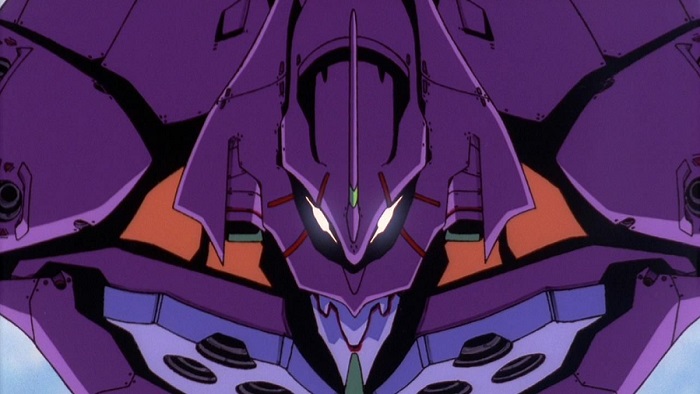 In a post-apocalyptic, alternate future, Earth has been invaded by strange beings known simply as “angels”, and the only way to fight them is with giant mechs called “Evangelions” piloted by adolescent children. It’s a standout title in anime studio Gainax's long and illustrious history which features a sophisticated deconstruction of the mech genre.

Following the original Dragonball made in the 80s, there’s no denying that - while technically released in 1989 - even non-anime fans were aware of “Dragonball Z” in the 90s. In this sequel, the battle for the seven mystical dragon balls serves as a backdrop to Goku and co.`s struggle to protect earth from extraterrestrial threats.

5. Ghost in the Shell 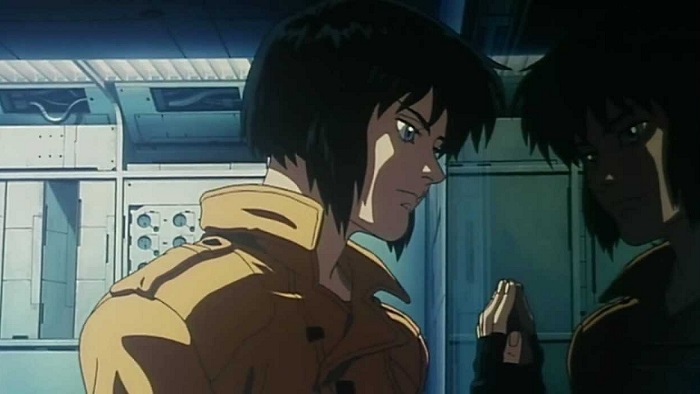 What Akira did for anime in the 80s, this film did for anime in the 90s, especially in terms of reaching out to the West. Motoko Kusanagi a.k.a. “the Major”, commander of her team from Security Section 9, has been tasked with capturing a hacker known as “the Puppet Master”.

This beautifully animated film from Production I.G. ponders many questions, the most prominent of which is: if a person’s mind is implanted in a mechanical body, is that person, then, no longer human? With the help of Kenji Kawai's score, it's a film that’s left its mark on the cinema world, not just that of anime. 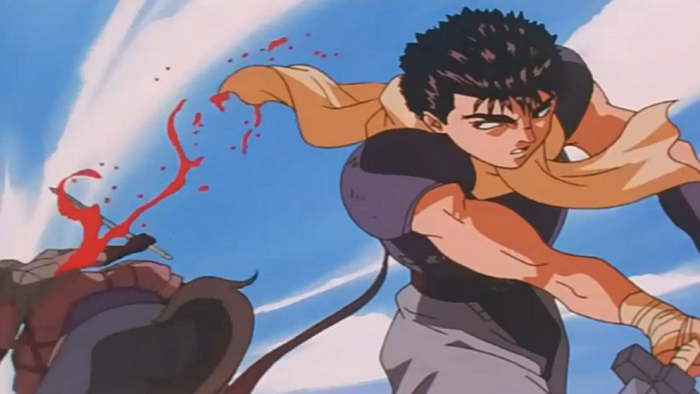 This shining entry in the "sword and sorcery" genre follows the exploits of Guts, a.k.a. “the Black Swordsman”, a mercenary of incomparable strength and skill, as he fights for the cunning Griffith and his mercenary army, the Band of the Hawk.

Even with its occasionally choppy animation, the original Berserk series easily overcomes this with its excellent writing, hauntingly beautiful and unearthly soundtrack by Susumu Hirasawa, and well-rounded cast of characters. And watch out towards the end of the series for one of the most gloriously brutal and apocalyptic climaxes ever. 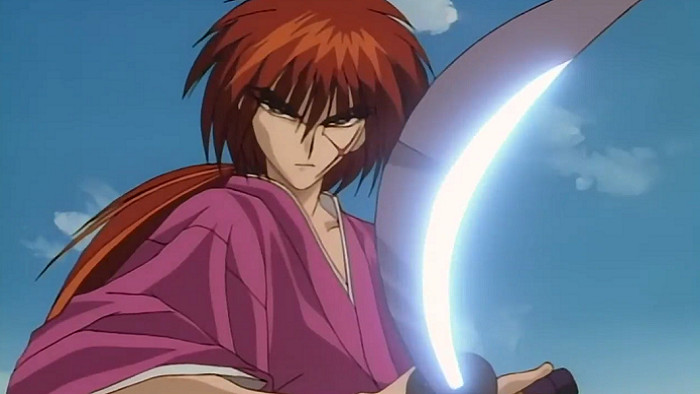 In the world of Rurouni Kenshin, while much of the rest of the world (the West in particular) has moved towards the “modern era”, Japan remains almost as a fly-in-amber, even in the twilight of its feudalistic structure. And right in the middle of that is Kenshin Himura, a mysterious, sword-wielding assassin-turned-pacifist (or conscientious objector) who, like Vash the Stampede, can be a bit of a goof one minute and stone serious the next, making it another well-loved title on this list of anime from the 90s. 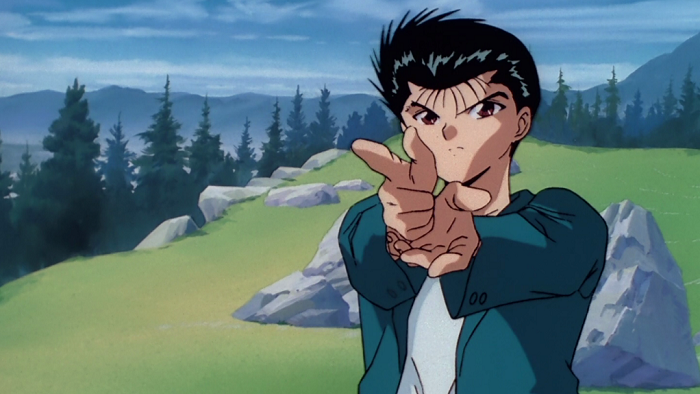 With the myriad of shounen anime that could have ended up on this list, this one came out on top. Instead of a plucky, hyper and overeager protagonist, viewers get Yuusuke Urameshi, a teenage delinquent forced to mature and grow when thrust into the hero’s role. After falling into a sort of after-life mix-up, he’s bestowed with the responsibility of a “spirit detective”, fighting to maintain the balance between good and evil among the spirit world, human world, and the demon world. 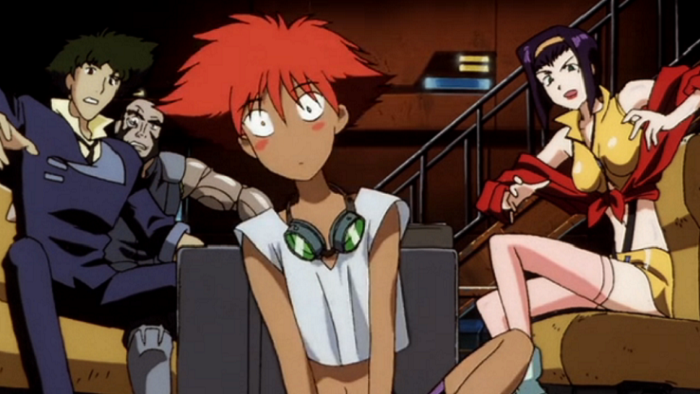 Detailing the various adventures of the bounty hunter crew of the eponymous ship, the Bebop, Shinichiro Watanabe’s most famous directorial work is well known for setting the standard for English dubs in the West. More than that though, it was among those titles that created the precedent for what anime could be, beyond the genre tropes and clichés. Though it isn’t entirely without them, the writing always makes it organic and heartfelt; charming and sober at once and backed by one of Yoko Kanno's best OSTs.

Cowboy Bebop is set in a reality crossing sci-fi with elements of the American western and "mafia" genres, while examining the depth of unforgettably awesome characters like Spike Spiegel, Jet Black, even Faye Valentine and “Radical” Edward. As the number one anime on this list of 90s anime, it’s earned that spot ten times over.

There is something undeniably glorious (and gloriously corny) about the anime of the 90s. So here’s to all those warm and fuzzy feelings that nostalgia brings, and here’s to hoping for more anime in the future that we can look back on just as fondly in the years further ahead of us.

Henshin a go go baby! Transformation is a staple in many genres of anime, from fighting to magical girl. The sacred rule of transformation is that no other character is allowed is interrupt while you power up to your next form, so of course you want to make things spiffy with a henshin sequence.