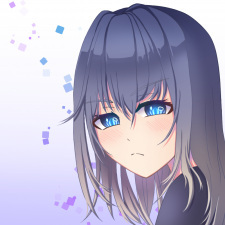 Cosmictimespace May 1, 2021 4:09 PM
I’m so sorry to hear that. My deepest sympathies go out to you and your family.

Does JJK feel like it’s taken a lot of influence from other series you’ve seen? Because fun fact: the author admitted Bleach was his biggest inspiration.

Oof, that doesn’t sound fun. Getting tired sucks in all honesty. It’d be cool if fatigue was something we could will out of ourselves. Buuut then I think another problem would rear its ugly head if that were the case...

Yep. Dinosaurs were a staple in my childhood. Like you, I would always get dinosaur books from the library, no matter how many times I’ve read them. The current studies of dinosaurs are so awesome now, especially regarding the fact that dinosaurs didn’t actually roar.
You like astronomy as well? Awesome! I absolutely love how humanity was able to gather so much info about celestial bodies and singularities! You’d never imagine such a thing would be possible, especially with how much we’ve mapped of the observable universe. I also like cosmology, a branch of astronomy that focuses on the origin of the universe. And I’d like to ask you a question: do you think the universe is infinite? I think it is considering that the definition of “observable” is
able to be noticed or perceived; discernible.
In other words: just because it’s said to be over 90 billion light years wide doesn’t necessarily mean we’ve discovered all of it.

I’ll have a better time now that I own a pretty good chunk of the manga. Though, I’ll admit I’ve been looking into a lot of Jurassic Park-related media lately, due to my fascination with dinosaurs.
Oh nice, how’s JJK so far?

I feel you. We can all agree that 2020 wasn’t the best year, too much drama and panic over something that was pretty much blown out of proportion. Im glad to hear you and your family are safe and had good holidays together. :)

I’m pretty busy and tired these days, and I’ve been struggling watching anime lately. Not because of the aforementioned dinosaur media, but mainly due to my laziness.

Since we last spoke, I dropped the Naruto anime, and have been reading the manga. I’m finally past the exam arc, and currently, on to where Naruto trains to use some pretty cool powers. I also finished a lot of other anime, and Ive since been expanding my tastes with different genres and Shōjo.

How are you doing lately?

Cosmictimespace Oct 12, 2020 3:10 PM
It’s not that it’s predictable, it’s because of the amount of exam arcs I saw before this. I’ve been told the Chunin Exams are the best part, but as much as I want to see it, it’s going to have to stay on the back burner until I’m not burned out.
In the meantime, I’m watching Shippuden now. Sure, I’ll be confused, but I really want to get to the meat and potatoes of this series.

It’s only 130 episodes if you subtract the fillers (still it’s a lot), but it’s mainly because I’ve seen so many similar series that it’s feeling a little repetitive. Which sucks considering that I’ve been looking forward to Naruto.

What anime are you watching at the moment?

How are you lately?