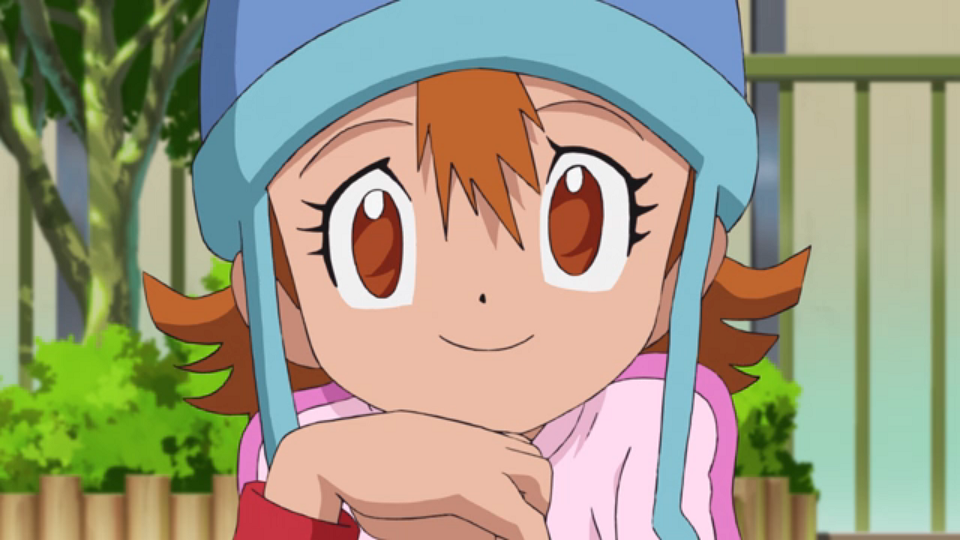 Soraa! I can feeeeel your love!!

I continued to dabble in anime for a few years, but I sorta stopped watching after 2010. And then people around me started pushing me into watching Sword Art Online and Attack on Titan. Remember back in the day when Crunchyroll was this little bitty site and Gintama was their biggest anime? (Probably still is?) We've come a long way.. We have so much better access to anime now, a handful of (legal) streaming options, especially with simulcasting. Since coming back into anime in 2014, It's been a sweet ride.

I try to keep a good mix of current and past season anime. You can see my favorites listed. But looking at my list, the genres I watch are so varied I can't really define the ones I like to watch the most--I guess I like being experimental. Obviously the main goal is to complete all that I "Plan to Watch"; and that's after catching up with One Piece!

The Name (You may call me Sora, I go by Noct, too~!)
"sorasfishing" = from Digimon Adventure (the English dub - episode 11)
My love for anime grew 100000x watching this series, and I always associated myself to be like Sora. The name is a reference to a scene where Sora is sitting at the edge of the pond with a fishing pole in the water, and Biyomon skips towards her in that sing-songy voice.

formerly "maikuushirokoe" (lazy translation of "behind the mic") - I started this account while I was doing a radio DJ stint, and also thinking about how I like to sing.

The Pic
Akari from the Aria series
These calming, feel-good, slice of life series won't ever be as flashy and attention-grabbing as your typical shounen or magical girl series. But they also won't be left out when it comes to appreciation. I love Akari! So bright and full of optimism and wonder, and her hair is PINK (my favorite color).

so not sure but ik there are a few movies

I hope so too

was gonna ask how u got into anime but its answered on your profile :D

nope I havent
its a long way and its been hard for me to go out in general :(

Dokkerich Mar 2, 2020 1:45 AM
nice to see digimon there
I rewatched it like twice when I was a teenager

kingtron1 Feb 9, 2019 2:19 PM
Aww well I hope you'll feel better soon. I have been the opposite in a way. Just been watching anime, but not exactly as much as I could. Mostly just a couple of episodes here and there. I dunno, I perhaps chat too much to watch anime in peace. I do know that there's plenty of anime that can cheer people up. It just depends on their preferences.

I'm very much the same, but I think I add more to my Plan to Watch than I should. I feel like I'm watching more anime than before too, but at least with many I don't have to wait week to week. I'm still trying to squeeze in some of the new Winter 2019 ones, but I'm still not caught up with or even began some from Fall 2018 yet. Just like you I'll eventually get to them.

I hope you're doing well as well. ^w^

kingtron1 Jan 15, 2019 7:31 PM
Oh my god!! I'm so sorry for the really really late reply. I kept getting those notifications that a new anime was added, and I just began ignoring them. Kinda forgot that I was chatting with you.

I hope you checked out Cells at Work by now. Yeah I'm like that too. I start more anime than I finish. I know how I am, so I do stop myself from starting anime I know I won't finish immediately. The only reason they're not in my On Hold list is because I will eventually return to it and finish it.

Well even if it is fanfiction, they should at least acknowledge that it wasn't their original idea. I haven't written anything in a long time now though.

Well I hope you've been having a great start to this year, and if you're not, then you can "start fresh" with the Chinese New Year.

I really liked Cells at Work, although I have to admit it took me much longer to finish the series than it should have. On the plus side, I got to see a special extra episode that I most likely would have missed if I had removed it from my queue. And yeah it does feel like I've only been adding to the long list rather than removing them as I finish them.

Oh, yeah I feel like writing fanfiction can be beneficial even if you're not trying to pursue a career out of it. I'd just rather post fanfiction rather than original material. I always get the notion that someone will steal an original idea and try to pass it off as their own.

Sorry for the late reply. Even though I visit this site often, as of late I kinda ignore my notifications since it's mostly been new anime being added. So all the other messages tend to get buried underneath all of them. I hope you had a great Christmas this year. I had a pretty okay one, but a little uneventful. Well thankies and have a Happy Happy New Year!!

kingtron1 Dec 14, 2018 6:58 AM
Yeah my mentality was that no one cares what I have to say, and the chances of chatting with the same person were very low. It was kinda creepy to find that I picked up a few youtube subscribers even though I haven't uploaded anything ever. They're all set to private, so I don't know who they are. Extra creepy.

Ugh, I have so many anime on my currently watching list, but I haven't even began watching Yona of the Dawn. I will be watching it soon though, since a few shows are near the end of their run. I've been waiting to start that one and Cells at Work.

It's been a very long time since I watched Digimon that I don't even remember the story. I mean we're talking about something from 2000 and when I wasn't as big of an anime fan as I am now. I would personally like to work on something original and not based on someone else's work, but writing fanfiction can help you since you are already using an established cast and setting. Don't know about posting any of it online though. Lol the doujins can get pretty bizarre and yeah most of them are X-rated. It's when they begin going towards fetish territory where I draw the line.

kingtron1 Dec 13, 2018 3:10 AM
Yeah I was like that too. It took me years before commenting on youtube videos. And I've only been on the Crunchies forums since May.

I used to enjoy watching wrestling and playing video games, but both have taken a backseat to anime. I feel like I'm so far behind that I have to catch up.

It is nice to create fanfiction of certain shows and games. I tend to fantasize about the older version of some characters more than romantic relationships. Or creating new events that occur.

kingtron1 Dec 7, 2018 7:42 PM
That's great ^w^ We'll see what else we have in common aside from anime. If you're on Crunchyroll, I go by the same name there. It's where I met Kurt-chan. I don't really have any friends irl, but I'm definitely the anime nerd in my family.

kingtron1 Dec 5, 2018 10:14 PM
~ Hai Hai again Sora-chan ~ Tutturu!! Sorry for the lengthy delay, but I'm still somewhat new to MAL so there's a whole lot I have to learn. I also haven't finished adding all my anime yet, so don't feel too bad if there's not that many matches.