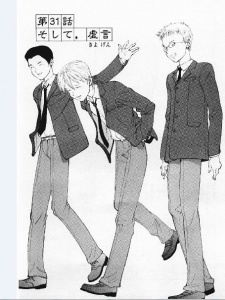 PrOxAnto Jun 8, 4:51 AM
Honestly the only reason I said it would is because he was so eager to drop the anime because of this small detail lol.
I can't actually tell you if it did or didn't get explained, comments say it didn't.

That said, I wouldn't consider this a plothole perse, not everything needs to explained exactly in the way that you need to know every single detail.
Maybe he took a cakculated guess knowing kids eat candy a lot and decided on poisoning it, it's not hard to come up with stuff like this yourself.

Aleczandxr Jun 2, 9:02 PM
Glad you enjoyed the videos, thanks for the kind words. I'm not sure how Johan poisoned the candy, sorry about that! It never particularly bothered me much so I never looked into it or thought about it much.

TibetanJazz666 Nov 18, 2020 4:28 PM
Well, I personally love Betterman. I enjoy media which has lots of ideas crammed into it, and Betterman is one of those shows. It is very weird, one of the weirdest anime I've ever seen, and that's a good thing to me. If it looks interesting to you then watch it and find out for yourself.

Hatul Nov 11, 2020 4:22 AM
Avoid the dub. The difference between it and the sub is like night and day.
It's not quite like Lain. It's a mecha series with a super robot (It's the creators of GaoGaiGar) and an Evangelion feel to it. It's a little campy and it has an unusual tone which may take some getting used to.
I know very little about biology and I follow it just fine. The concepts here are based on real life biology, and how it relates to the "in series biology" is explained.

Yeah, rewatching things is my favorite passtime now that I've watched everything and have very little new things to look forward to.
Also, keep in mind that my list and many of these rewaches happened over the course of over 15 years...

Hatul Nov 10, 2020 10:33 AM
Yes. It's still one of my favorites. I don't know what you saw on youtube.. What did you see that didn't give you a good impression?
Regardless, I'd say give it a few episodes before you decide.

Yes, as far as I can recall, it's one of the many anime summary films that takes but does not add. As a standalone film, it's enjoyable but it is useless relative to the series.

I hope you enjoy it too, I'm glad you're finding my list useful.

TheKillerAngel Aug 30, 2020 5:39 PM
Yes. If you read both novels, the events of Genocidal Organ - specifically, the global nuclear war that wipes out most of humanity - are referenced and are a major basis for the setting.

skapbadoa Mar 11, 2020 4:52 AM
Haha, at this point I'll only believe Despera is still real when I finally have it on my screen.


>Also, have you come up with an explanation for this? XD


To be entirely accurate I'd have to rewatch Lain before answering, since it's easy to forget nuances of the show, and I don't think I've actually rewatched it since writing my thing back in 2017. I feel like when we first discussed this there was something about Lain's development which made me believe she had been working for justice during episode 5 (and therefore I rejected the idea that she was doing bad things here), but it's been long enough that I can't specifically remember where her personality was at in that point of the timeline, and additionally I think I got too hung up on the idea that she was saying it in response to seeing Mika's cyber ghost.


However I do obviously have the PS1 story fresh on my mind since I've just published a video about that, and juxtaposing the two of them it's probably not too much of a stretch to say that this was just Lain exploring the darker side of the Wired, participating in a shady online group. There's a lot of that in the PS1 setting, and I think that helps to make sense of this too. Episode 5 ends with the above scene, and therefore narrative-wise it directly leads into the beginning of episode 6 where she's happily chatting with the Knights. So I'd say "who is it today" is just as simple as it seems, being a line that illustrates how Lain was beginning to fall into bad company.

skapbadoa Mar 9, 2020 11:21 PM
That is indeed you haha. Admittedly I did just kinda put it out there without asking first, but did you want me to cite your MAL username or leave it anonymous as it currently is?

Still no plans to give Texhnolyze another chance though. I just didn't find it very interesting outside the aesthetic. ¯\_(ツ)_/¯
All Comments