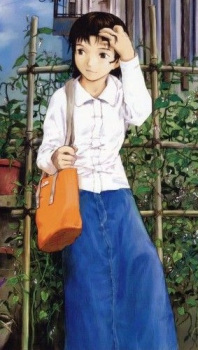 siddhant26 Apr 21, 10:57 AM
completed s3 p2 of AOT. It's no modern masterpiece, but it's really fun. Everywhere I go, I see people making it out to be a masterpiece, IDK how they come to the conclusion. Its lacking in so many aspects

siddhant26 Apr 9, 11:21 AM
Yeah sure. I started AOT because people couldn't stop talking bout it, as a result a good of amount of stuff was nearly spoiled to me. But I do intend to watch it fully, due to its masterpiece status.

siddhant26 Apr 9, 10:50 AM
The mere fact that you've watched Le Chevalier de'on. And favourite it, makes me respect you! Also FMA 03, Texhnolyze.. You got good taste. Also read your review on shingeki no kyojin S1. I agree. I'm currently on the 16th episode and while I'm really enjoying it- it isn't giving justice to its premise.

Buttershooter Jan 27, 12:57 PM
thats who I thought lol, wanted to make sure

CaptainKenshiro Jan 2, 10:32 PM
Sorry I missed your replies on the spoilers boxes, now I'm rewatching the show in order to modify my older review, as there's no point in leaving it there as bad as it is. I hope you get to write yours so I can read it in the future.

CaptainKenshiro Jan 1, 1:46 AM
On the first half it wasn't about who did it because they didn't know the cases were related at first, but then they did try to find that and the mastermind came off as obvious. His reason is kinda bullshit to me, but maybe that's because I don't fancy characters with God complex, at least if they are not explored, and it seems that we agreed that wasn't the case here.

Let's be honest here, the main character is really the one that matters in the end.

The themes did have some closure, but didn't the old guy get away?

Anyways, I recognize that my review is shit as I said I only wanted to write something for ending 2020 and I clearly didn't remember the title well.

The most honest thing to do would be to delete my review as it can give a bad impression about the show to some readers, but I won't since it will be a reminder of the things I did wrong.

I'm not the best person to say this since you have more reviews than me and the one from me that you read is plain bad, but since you have this series pretty clear in your mind, and understood it better than me for example, why don't you write a review about it, if you want it of course.

CaptainKenshiro Jan 1, 12:59 AM
Thanks, now for a possible response, I feel like there isn't much or well presented focus on the girl to addres the first point properly, though I definitely should have worded that better.

True, I totally missed that, but it's still not very believable as you said, in GitS for example they have to connect directly to the criminals and both people have anlot of security options.

Erasing the memory has the downside of dragging the plot and making it goes in circles on those cases, but what you said is true, my bad.

Again, I should have worded that better, if I remember correctly they found the culprit's location before the mc in the first case, but didn't storm because they didn't know who he was, I think they could have entered anyways but yeah, in the end, you're right.

Yeah, I have a problem with attempted killing not being the same as actually killing someone, but I should give you that point too.

I will keep writing in a bit, now I'm running out of battery, but I thank you for your corrections, what do you think about the show?

CaptainKenshiro Jan 1, 12:08 AM
I'm not really happy with it to be honest, as I wrote it mostly because I was bored and wanted to write about something that came out in 2020. Go ahead and correct me, that's the best way to learn.

voidpeh Nov 25, 2020 2:37 AM
Hi! I saw your Gundam Turn A review, and, apparently, you have a great knowledge about the Gundam franchise. I would like to ask you about the order to watch the franchise. My priorities are "Turn A" and "War in the Pocket", what the minimum amount of titles I need to watch before to can view the 2 titles i've said without bigger problems?

revengerofdeath Nov 10, 2020 1:49 PM
Hey! Thanks for the answer!
Maybe the english dub isn't top notch. It seems kinda shonenish. I am going to watch the sub anyway.
I saw trailers and battles. I read on wiki the series uses Jungian symbolism and that there are scientifically based terms that require broader knowledge concerning biology and other sciences. I was expecting another serial experiements lain! Or something like that. Are the technobabble used accurate? Also what about the mood? I read there is some pretty disturbing imaginary. Well, maybe it's also the character design, which seems too childish. I am not still totally convinced.

EDIT: Damn, i saw your list, you really like rewatching your favorites! For me it's so hard to do.

revengerofdeath Nov 10, 2020 10:16 AM
Hi! I like so much your Betterman's review. I watched some pieces on youtube and it doesn't seem so good though. Do you still like it?

defunctmaluser Aug 1, 2020 6:30 AM
Prediction for the next arc: Usopp will find a way to bring Sogeking back while he's still God Usopp as a gigantic prank on the marines.
All Comments