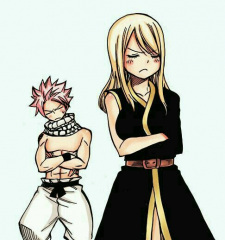 I agree with you on bakuman ! Niizuma is also my favorite character in the series, always crazy and funny but a good person at heart and still being true to himself. (And really cool haha)

I didn't see gintama yet but everydoby seems to like it! When I'll be in the mood to watch comedy it's the next one on my list for sure !! I've seen some meme template from gintama and it's just so wtf xDD

Ore monogatari is quite enjoyable for the moment ! I was afraid Takeo would take so much time to realize that yamato is indeed in love with him and not with Suna but all has been resolved in episode 3 ! so I'm looking forward to the next episodes ! :D

To answer your other question, I actually played like 2hours of genshin impact just to see what the gameplay and experience looked like. It was cool and I loved the job on the voice acting in japanese (they have actually plenty of popular seiyuu!) I would probably played more if it was a real MMORPG instead of a gasha game :x But it was ok!
As for Vtuber, I used to watch a little bit of Kizuna Ai past in the days but now I'm totally into Mori Calliope from Hololive Eng! I should also try to watch more from hololive JP like korone or others coz it will be good to practise Japanese that I'm studying rn x)

Thank for the discussion again ! :)

YEsss ! I started bakuman like 1week ago and i'm watching it before sleeping. I think it's a really great anime that shouwcase the reality and the work you have to do when you aim to be a mangaka! It's very interesting to see the whole serialisation process with the editing house etc...

I find the relationship between asuki and mashiro a bit weird but I can understand! Also I love the craziness of Niizuma Eiji ! hahaha

And about Houseki no Kuni... well I watched it with a friend and god, what a beautiful anime it was. The CG and background and animation were fucking top notch, it created many breathtaking scenes! I was very sad that the story didn't give much more at the last episode and I was sad that it didn't get more episodes to see some resolution to the questions I had.

Also I really liked the humor in this series, many characters are fucking trolls xD But I miss the original Phos :'( she was sooo funny and I loved her hahaha

Well I went to see how the manga looked, it had really greats ratings but god the drawings fall short compared to the anime and it's a shame :( I don't know if I will read it to know the following of the story.. But it was a really really great watch!

What about you? What do you think of both the anime? :)

Have a great day !


Thank you so much for this awesome music to enjoy!
I loved especially those by Soulitune. I felt like in one of those bar scenes in anime or movies, just chilling out, listetning to great music while drinking. Very nice atmosphere , loved it.


I don't know if heard this, but here:

I enjoy listening to piano and other classic, traditional instruments while relaxing or reading.

And thank you once again for great recommendations ^̮^

Shiroelf Nov 23, 11:34 AM
I really like Narita's way of showing a story through different characters - everybody can shine and no one is treated like an addition to the other. That's way I love reading his works - they are ones of my favourite light novels (if I only mal had it I would put Durarara, Baccano and fate/Strange Fake in my top light novels ಥ_ಥ ).
I enjoy watching or reading series which center around the chaos of the city. Because I loved Kekkai Sensen, somebody recommended me to watch Durarara and I fell in love with it. It had this chaos and craziness that I was looking for. Things that would be considered as strange were normal. The way it was presented was amazing - I didn't feel like sth was off with for example Shinra's love for Celty, even though she didn't have a head and was a legendary monster.
After finishing watching I ordered the light novel from the bookstore and read it. I was amazed to see how well they adapted this crazy story into an anime. It definetely wasn't easy. I decided to first read Baccano then watch it. I'm still reading so when I'll finish I'll go for anime adaptation.
And when I saw that the author of those bizzare novels wrote also Fate (which I love), I couldn't resist and started to search for a way to read it. And when I did, I was not dissapointed. Fate/strange fake is one of my favourite TypeMoon series.
Servants are really unique and strange - which is very Narita's way of creating characters. The same is for others - I mean, a priest with a shotgun instead of a hand? - definetely Narita's idea.

saxena5355 Nov 22, 8:51 AM
Neither my smartphone nor PC can run Genshin Impact unfortunately since I want to play that game so much. Besides that, please continue "The Day I Became a God". Mark my words, you'll not regret it one bit with interesting revealation in the 7th episode.

krukrooo Nov 22, 8:46 AM
I totally agree with you. I want to experience the hype again but this time with someone else and see their reactions as well.

krukrooo Nov 22, 7:32 AM
Ikr. I just hope togashi sensei recovers from whatever his disease is. And hopefully continue the world of hunter x hunter

krukrooo Nov 22, 5:13 AM
Actually, Its my second time watching it. I watched it 2 years ago before and today since my brother is watching it for the first time, I decide to join him too since I'm also planning on starting the manga.

saxena5355 Nov 22, 4:14 AM
I know the ratings are lower than Charlotte but trust me Episode 5 & Episode 7 are the best episodes of this series!😊

Shiroelf Nov 22, 3:00 AM
Yea, there is more content. It's releases new chapters every 3 months but it depends on Hoshino's health a lot of the time so she occasionally misses that deadline.
However, the quality of the story and art is really good.

saxena5355 Nov 21, 6:34 PM
Hey there, buddy!🙂 It's been a while here as well. I'm doing good and what about you? Quick question, have you started "The Day I Became a God"? Real plot development is going on there. Maybe, Jun Maeda's claim of this becoming the most emotional anime can come true!😢
All Comments